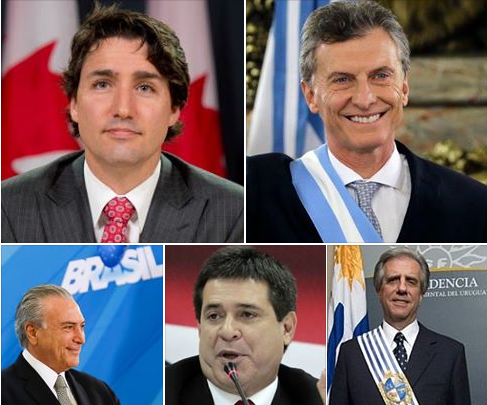 Canada will launch trade negotiations with South American trade bloc Mercosur next Friday, with an eye to accessing free trade with “prize” markets Brazil and Argentina.

A first round of talks is being scheduled for Ottawa the third week of March, according to a spokesman for Trade Minister François-Philippe Champagne.

Champagne will travel to Asuncion, Paraguay to make the announcement alongside his counterparts from Mercosur countries Brazil, Argentina, Paraguay and Uruguay, Joseph Pickerill told the National Post. The decision comes after a round of exploratory talks that began this summer.

This next step in the Liberal government’s trade diversification strategy will come a day after Canada formally signs the 11-country Comprehensive and Progressive Agreement for Trans-Pacific Partnership in Chile.

There is more “momentum” for such trade pacts now than there has been in the past, Pickerill said. “This is not the first time that Canada has been talking about potentially doing this, but in the past it’s barely gotten lift-off,” he said. “There’s … a few stars that are aligning right now for Canada.”

Canada’s interest in diversifying trade has much to do with a growing sense of protectionism in the United States. U.S. President Donald Trump decried “bad” trade deals during his election campaign and leaving the original TPP, a year ago, was one of his first executive orders. Uncertainty hangs over the North American Free Trade Agreement so Canada has been looking elsewhere.

The five countries have agreed on a comprehensive agreement that will cover both goods and services. Negotiations are to include “progressive” elements too, including on gender, Indigenous issues, labour and the environment. Initial meetings with labour unions will comprise part of next week’s trip, according to Pickerill.

“We think there’s a great deal of optimism around what we might be able to accomplish,” he said.

Total trade between Canada and the four countries totals about $8 billion. By contrast, trade with the smaller combined markets of Pacific Alliance countries — Mexico, Colombia, Peru and Chile, all of which have bilateral agreements with Canada — is $48 billion.

The major contrast is that Canada has free trade pacts with countries in one bloc and not the other. “There’s a lot of untapped potential there,” he said, especially for the automobile, chemical and lumber sectors.

Negotiating rounds will rotate between Canada and Mercosur countries. Canada is not publicly stating a desired timeline for the conclusion of negotiations.

The European Union, with which Canada also has a free trade pact, was coming close to concluding its own agreement with Mercosur this week, according to news reports.

Venezuela used to be a full member of Mercosur but was suspended in 2016. Its regime is being frozen out of regional politics and is heavily criticized by the Canadian government, with its top officials subject to strict economic sanctions.