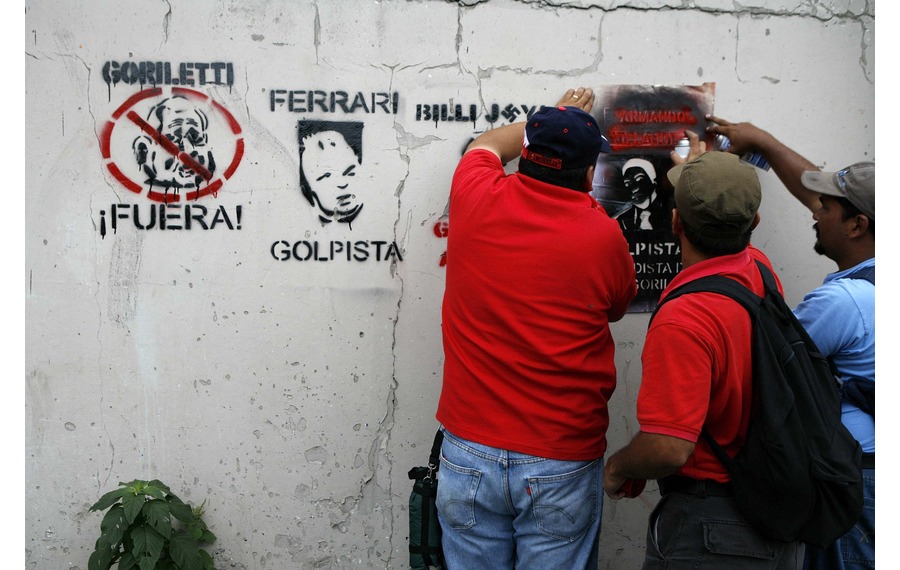 Falling Out and Falling Apart?

SAN JOSÉ, Sep 1 (IPS) — The late June coup d’état in Honduras was a body blow to political integration in Central America. The institutions of the regional integration process have been incapable of reacting to the event, leaving the future of the process increasingly uncertain and trade agreements, themselves in poor shape, as the only viable way forward, experts say.

Then came the decision of Panama’s new rightwing government to withdraw the country from PARLACEN, further weakening the regional institution.

Renzo Rosal, assistant head of the Central American Institute for Political Studies (INCEP), said the Panamanian government’s decision showed how tentatively the issue of Central American integration is pencilled in on the agenda of the region’s governments.

The member countries are at present El Salvador, Guatemala, Honduras, Nicaragua and Panama, and the Dominican Republic (although it is not strictly within the region), which has 22 appointed representatives. Mexico, Puerto Rico, Taiwan and Venezuela have observer status.

Costa Rica never joined PARLACEN, which it regards as costly and ineffective. However, it is a member of SICA and the rest of the Central American regional institutions.

Panamanian President Ricardo Martinelli, who took office Jul. 1, said PARLACEN was "a den of immunities," referring to ex presidents of Central American countries taking refuge in parliamentary immunity from prosecution when they are accused of corruption. However, this immunity was lifted in 2004, and PARLACEN representatives are now subject to the laws of their own countries.

In any case, it will not be easy for Panama to extricate itself from the regional forum, because the treaty that established PARLACEN does not include a mechanism for resigning from it, Rodil said.

Under international law, in the absence of a resignation procedure, a member of a body may withdraw from it if all the other members agree. But the other PARLACEN members have so far rejected Panama’s decision, calling instead on the Martinelli administration to reconsider, he said.

PARLACEN and the CCJ absorb more than 60 percent of the resources available for integration. The PARLACEN budget is over 10 million dollars a year.

SICA, created in 1991, is the latest of a long series of integration efforts in the region. Its predecessor, the Central American Common Market (MERCOMUN), was formed in the 1960s but failed due to economic crisis and the civil wars that tore the region in the 1970s and 1980s.

The proliferation of acronyms is a bit overwhelming. "In the 1960s, there was even a Central American Defence Council (CONDECA), which few people knew about," Rodolfo Cerdas, of the Costa Rican Centre for Political Administration Research and Training (CIAPA), told IPS.

Cerdas, author of the book "Las instituciones de integración en Centroamérica" (Integration Institutions in Central America), said that "years ago, I counted a total of 59 institutions, and another 14 that were defunct. No doubt there are more now."

All this machinery, in his view, is completely ineffective. "Integration should be built from the bottom up, not the other way around, creating institutions without any content." According to Cerdas, "political integration is dead," but it is possible to envisage an emerging economic union.

Cerdas said that, in his opinion, the free trade agreement signed in 2004 by the United States, five Central American countries and the Dominican Republic – CAFTA - has made "the most progress" towards the oft-mooted Central American union.

In an interview with IPS, Arnoldo Rubio, coordinator of the master’s degree course in European Studies and Regional Integration at the Costa Rican Distance Learning State University (UNED), expressed a similar view.

"Integration is failing, especially in the political aspects. The process has not reached maturity," he said.

"The commercial side has received greater stimulation," Rubio added, emphasising the importance of the CAFTA treaty, as well as the negotiations towards an Economic Partnership Agreement (EPA) between Central America and the European Union.

According to Cerdas, there has been a conceptual problem with regional integration from the outset. The old MERCOMUN idea of a protected and privileged trade area does not make any sense now in the light of globalisation, "so the concept of open integration was adopted. But that needed to be translated into concrete terms: branches, activities, technology and timelines, and this was not done."

The CIAPA researcher said "Central America’s big problem is that it has had many opportunities for integration since independence in 1821, but has succeeded in none of them."

"Attempts have always been made to impose it from above, when the logical approach is to start by developing areas where economic, financial, commercial, cultural and educational affinities between the countries can be found.

The legacy of Spanish colonialism lumped Costa Rica, El Salvador, Guatemala, Honduras and Nicaragua together in the former Federal Republic of Central America (1823-1840). But the modern region includes the former British colony of Belize, and Panama since its 1903 separation from Colombia.

Unionist rhetoric has been rampant ever since independence from Spain in the early 19th century, but has remained hot air. The current integration model appears to be "a mistake," according to Cerdas, because it is made in the image and likeness of the EU, without allowing for the region’s specific problems and diversity.

In order to change the system, there will have to be a crisis, "and it would be very easy to provoke one. The moment the EU tells PARLACEN that there is no more money, it will all be over, because no government will pay for its upkeep," Cerdas said. (END/2009)