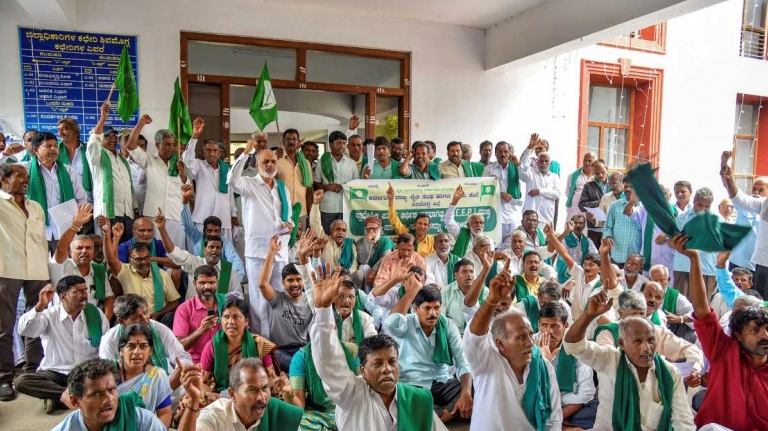 A farmers’ coalition, which represents millions of farmers nationwide, has urged the Centre to desist from negotiating an interim trade deal with the US during President Donald Trump’s India visit, saying it would be detrimental to the interests of Indian farmers.

In a letter written to Prime Minister Narendra Modi on Wednesday, Yudhvir Singh, national secretary of the Indian Coordination Committee for Farmers’ Movements (ICCFM), said the proposed $10-billion interim trade deal is a precursor to a free trade agreement (FTA) being negotiated with the US.

“We understand from reports that the American government and businesses are interested in opening up our market for wheat, corn and soya imports, in addition to an import duty reduction on cotton, chicken, apple, walnut, almonds, etc,” ICCFM said. Among others, the Naresh Tikait-led Bhartiya Kisan Union is affiliated to the ICCFM.

Meanwhile, the Rashtriya Kisan Mahasangh (RKM), a farmer movement with rightist moorings, called for a nationwide protest on February 17 to ‘warn’ the government against going ahead with a trade deal with the US.

According to the RKM, last November, a high-level US delegation visited New Delhi to discuss the proposed deal. “If this deal comes to fruition, Indian farmers will have to face disastrous repercussions, as the import duty on products like milk, apple, walnut, almond, soyabean, wheat, rice, maize and poultry products will plunge heavily. An estimated ₹42,000 crore worth agriculture, dairy and poultry products will be imported from the US every year,” it said in a statement.

Similarly, Indian dairy farmers, consisting mainly of small and marginal holders and landless livestock rearers, will take a big hit as the Indo-US trade deal is expected to open up the dairy sector to American dairy, which uses animal feed and transgenic crops-based components, the ICCFM said.

The letter also reminded the government about the issues around American produce containing transgenic products. “Any imports of such transgenic products into India, of corn or soya or canola or cotton or apples, are not acceptable to us — there are concerns about biosafety,” it said.

The coalition also reminded the Centre the US is already threatening the livelihood of Indian farmers by objecting to the meagre support (through public procurement) being given by the government to food producers here, citing “violations of rigged rules” of the WTO.

Through such trade deals, Indian farmers are being forced to compete with heavily subsidised US producers without the creation of a level playing field. While the US farm bill 2019 allotted $867 billion as subsidy for American farmers, the aggregate producer support estimate to Indian farmers was (-)14 per cent over 2000-2016, it said, quoting a study by the Organisation of Economic Co-operation and Development (OECD).

The ratio of investment on agricultural infrastructure in India and the US is of the order of 1:1,00,000 in dollar terms. “With subsidies of the kind that America continues to provide because of the rigged rules of WTO, and with this kind of infrastructure investments, the production cost of producers there is low, and competitiveness is higher. The trade injustice faced by our farmers is stark and unacceptable,” the ICCFM said.

The letter also warned the government that it would face huge farmers’ protests if India went ahead with any violations to farmers’ rights in the form of Intellectual Property Rights (IPR) regime changes that curtail farmers’ seed rights at the behest of American interests.

“If the Indian government proceeds with unfair trade deals that don’t take into consideration the various issues pertaining to our farmers here, farmer movements like ours will be forced to intensify agitations against such anti-farmer policies,” it added.