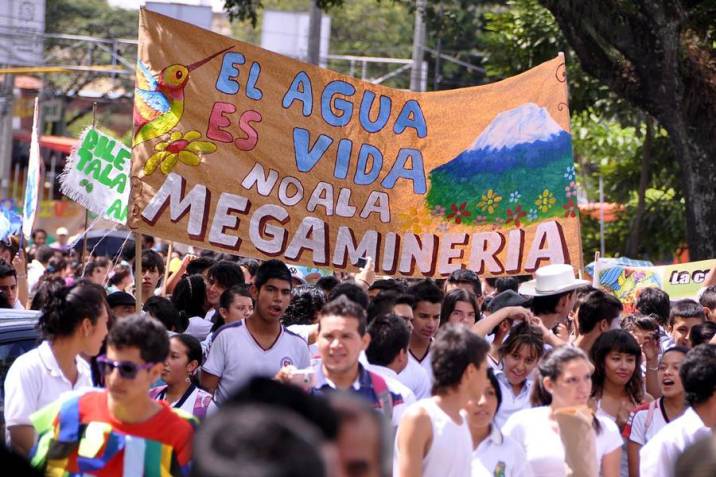 Foreign investment, knowledge and international arbitration: inside a research trip

In December 2020 – when travelling was still possible – I had the privilege of visiting Colombia to join an IIED research team investigating investor-state disputes. Our visit focused on the Páramo de Santurbán, a wetland ecosystem that has become the nucleus of several international arbitrations between the Colombian state and large multinational companies.

Páramos, or wetlands, are unique ecosystems that only exist in the Andes parts of South and Central America. In Colombia, they were introduced to us as ‘water machines’, but scientists prefer to call them ‘evolutionary hot spots’.

Just below the Páramo de Santurbán there are important gold reserves situated near the towns of Vetas and California, and the Colombian state and large multinational corporations have been trying to make a business out of these deposits for decades. They face obstacles however, namely the Páramo itself, the water it produces and supplies to several cities, as well as the local community.

We started our research in Bogotá. Our first stop was the Constitutional Court of Colombia, where we heard about the legal proceedings that blocked a significant investment by the mining company EcoOro. Constitutionally, there were two problems: no mining is allowed within Páramos, and the delimitation of the area that is protected is controversial and needs to be redrawn.

As a result of this decision, EcoOro, a Canadian company, brought an investor-state dispute settlement (ISDS) case against Colombia. ISDS is a form of international arbitration that allows foreign investors to sue states if they believe governments have violated their investment treaty obligations. The advantage of this system, some people say, is that it allows settling these disputes peacefully for good.

We talked to investment lawyers, mining officers and experts in the demarcation and the environment. They told us about their areas of legal expertise and ‘el problema de Santurbán’ [The problem of Santurbán]. Investment lawyers discussed the intricacies of investment treaties, and Colombia’s policy on these agreements in the 1990s and 2000s. Mining experts focused on the details of the mining laws. And those in charge of the delimitation explained the challenges of conducting an appropriate delimitation taking into account both nature and social life.

After Bogotá, we travelled to the city of Bucaramanga. People in the city oppose mining in the Páramo de Santurbán, as part of their water supply comes from these wetlands. Civil society viewed the conflict in terms quite different from the experts in Bogotá. Their main concern was water, not a specific source of law or knowledge. Their approach to knowledge was not compartmentalised, in the sense that multiple laws, technical knowledge and science were articulated around one single problem: water for Bucaramanga. These people also emphasised their concrete efforts to stop, or find a solution, to mining in Santurbán.

The inhabitants of the Páramo

We got yet another perspective when we travelled to communities close to the Páramo. In the towns of California and Vetas, people were living inside the problems posed by the prospects of this large-scale project. The discussion was about the mining history of the towns, anecdotes, the personalities of the miners who came first, and those who tried later. The beautiful mountain landscapes and people’s identities are intertwined with mining. In the stories they told of Colombia’s complex history, of past and recent kidnappings and imprisonments, mining was always a protagonist. Most of these stories ended with a sour note however: people are concerned about whether they will have jobs or whether large-scale mining will destroy their way of life.

The contrast between the global, national and local levels is significant. From a policy and academic view, talking about the fragmentation of law and knowledge is quite common. International law is organised in expert areas, investment, trade, environment, etc. In a way, the people we talked to in Bogota incarnated these specialisms: one spoke for international investment law, another for international human rights, and so on. The same happens with science. The science-based discussions about the demarcation of the Páramo were criticised for overlooking social aspects. Often, scientific and social dimensions are treated at different levels, by different people. As researchers, we are used to navigating these intricacies, the intricacies of global governance – we are equipped with analytical and normative lenses to understand what is at stake.

The situation changes markedly when one arrives in places such as California and Vetas. One could say that the starting point for genuinely understanding what is going on in California and Vetas is being there, talking to people and visiting the Páramo. But in this case, as well as in other experiences, I normally have more questions than answers after I am done.

Tackling these questions is not easy or straightforward. The contribution of foreign investment to the Sustainable Development Goals depends on developing a holistic understanding of interlinked issues and genuine multi-stakeholder partnerships. Such partnerships will require more cooperation and coordination than the ISDS framework can promote or nurture. Undoubtedly, we need to take a wider, holistic view.

Back to the start, i.e. the EcoOro ISDS dispute: the case is still pending. In the hearings (which will take place in Washington D.C.), the discussion will be similar to what we heard from people in Bogotá. Facts will be arranged according to international investment law. At most, the international arbitrators – the judges of these cases – might also take into account some dimensions of international environmental and human rights law.

Eventually, this dispute between EcoOro and Colombia will be resolved, and experts in this field, like my colleagues on this trip, can perhaps guess what will happen, who might win, who might lose. Yet, we know that the real dispute is not over, and the ISDS process has done little to resolve it for good. As we heard in California and Vetas, there is another multinational corporation trying to do business in the region…