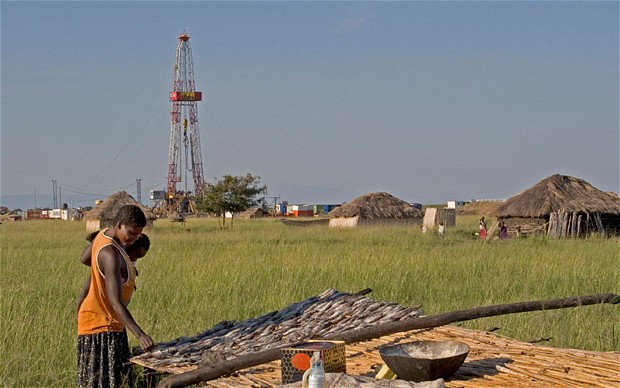 KAMPALA (IPS) - The heavily criticized legal mechanism, known as ISDS, is an important tool for European companies to pressurize developing countries. This year Uganda joins the rank of developing nations asking themselves : “Why have we ever signed this ?”

Earlier this year, the French oil company Total filed a request for arbitration against the government of Uganda. In essence, arbitration is a way to resolve a dispute, not by going to a public court, but by asking the verdict of a private court. Both parties choose an arbitrator, usually an investment lawyer, and the two of them choose a third one. The arbitration is hosted, in this case, by the World Bank.

This is a new step in the frustrating process of Uganda trying to turn its oil into cash.

Crude oil reserves in Uganda are estimated by government geologists at 6.5 billion barrels, half of which lies beneath the famous Murchison Falls, a famous national park, known for its wild animals. Wells have been given exotic names, like Crocodile, Buffalo, Giraffe and Warthog.

These peaceful names contrast with the bitter fights that are being fought over the oil. Commercial production has been repeatedly delayed by disputes with explorers over taxes and development plans. Now it’s the French oil company Total refusing to pay tax. It acquired a 33 per cent share in a 2.9 billion dollar project owned by Tullow Oil. According to Ugandan law, when a stock is bought, a stamp duty must be paid.

However, the oil firm refuses to do so, citing no legal obligation to honor the government claims. Total has not disclosed how much tax is at the heart of the dispute or why it objects to the tax levy but a source at the Uganda Revenue Authority told Reuters earlier that the Production Sharing Agreement (PSA) includes a tax waiver.

From their offices in an eight-story glass building located in the lush green high-end Nakasero area in the capital city Kampala, Total’s Corporate Affairs Manager Ms. Ahlem Friga-Noy stated that “given the applicable confidentiality obligations, we are not in a position to comment further on the proceedings.”

The Office of the Attorney General of the Government of Uganda replies in the same manner : “We are under obligation not to disclose the content of the matter to the public until it is appropriate.”

This points exactly to the problem of arbitration. In a court room all affected parties and stakeholders have the right to speak, or at least listen, but an arbitration procedure is very secretive. No one is obliged to disclose details. Has the state really behaved badly ? Or is it the company who abuses arbitration as a pressure to get a tax reduction ? The public remains completely in the mist, until the final verdict of the tribunal is published, which can be a multimillion dollar fine.

The problem Uganda now faces has been made possible by the Bilateral Investment Treaty signed in 2000 with the Netherlands. According to the treaty, all Dutch investors in Uganda have the right to pursue arbitration before the World Bank court if they feel treated unfairly. The French company Total Uganda registered itself as a Dutch company.

This is known as the Dutch Sandwich ; you put a Dutch company in between and then you become a Dutch investor. Which turns the treaty into a tool to drag a state before a tribunal of three men in Washington, having a commercial background and the ability to award billion dollar fines, without a possibility to appeal. If Uganda is condemned to a compensation but refuses to pay, the company has the right to seize Ugandan assets in the world.

This is against Ugandan law, says the renowned Human Rights lawyer Isaac Ssemakadde. “According to the constitution, taxation is wholly the creation of the law of the state.” Which means that disputes have to be settled on the basis of the law alone. “Even an agreement between parties cannot supercede the obligation fixed in the law. There is therefore no room for arbitration on taxation,” he said.

“In an earlier tax dispute, between Heritage Oil and Gas against Uganda Revenue Authority, the High Court has forbidden the state to refer proceedings to the arbitration processes in London or anywhere else outside the jurisdiction of the Ugandan courts of law,” noted Ssemakadde.

In short, “Total is being treated differently to other business persons which is in violation of article 21 of the constitution of Uganda which states that all persons are equal before and under the law.”

Nobody can check Total’s claims about a tax waiver, because the Product Sharing Agreements are confidential. This is so despite the fact that Uganda has an Access to Information law that was promulgated in 2005. This limits the discussion, and knowledge, about the proceedings in the country’s oil sector to senior politicians and bureaucrats. The ordinary Ugandan is kept in darkness about what happens there.

The secrecy is not only advantageous for oil companies, but also for certain politicians, who seem to be interested in “personalizing” the oil resources. The Ugandan president Yoweri Museveni recently told Ugandans that those people who are challenging him politically in the forthcoming general elections “are after my oil.”

A new interactive map made by Dutch journalists, with all known ISDS cases in the world, shows that ISDS is mainly used against developing countries. Sometimes because they clearly behaved badly towards an investor, but in other cases it’s more likely that it is used as a bargaining tool and a threat by multinational companies for better deals. Litigation costs amount to 8 million dollars on average, calculated the Organisation for Economic Co-operation and Development.

For lawyers and arbitrators this is simply an effective tool to defend the rule of law. “I’m happy there is arbitration”, a Dutch investment lawyer says. “There are many thug states in the world. And why do they complain ? They signed the treaty themselves.”

“In the end, it’s the ordinary Ugandan taxpayer to bear the brunt and consequences for the enormous amounts of money that is going to be spent on this arbitration process,” says Ssemakadde. “Whereas Total can afford to maintain a given team of lawyers in Washington for, say, a month, Uganda can hardly afford this.”

The people remain ignorant about the deals that are made, and who exercises pressure on whom. Unless the general public starts to view the oil, as well as the treaties their government signs, as belonging to them and not the selected few in government, companies like Total will continue dragging the state into expensive arbitration processes, paid by the Ugandan taxpayers, who are the actual owners of the national resources.

This article is part of a research by De Groene Amsterdammer, Oneworld and Inter Press Service, supported by the European Journalism Centre (made possible by the Gates Foundation). See www.aboutisds.org.