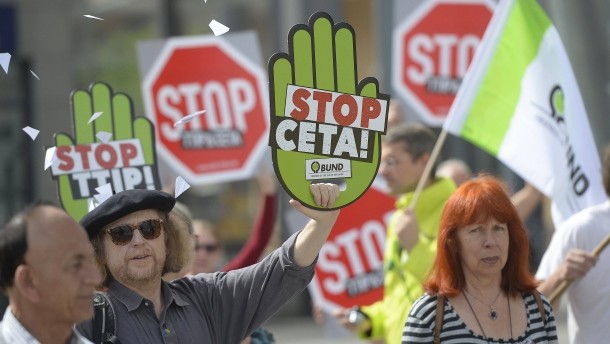 * Ruling means removal of tariffs can be applied provisionally

* But investor protection system can only come into force later (Adds details on ruling, background)

BERLIN - Germany’s Constitutional Court gave the green light on Thursday for the government to approve an ambitious trade accord between the European Union and Canada under certain conditions, boosting its chances of going through in a vote next week.

The court in Karlsruhe rejected emergency appeals by activists to prevent the government from backing the Comprehensive Economic and Trade Agreement (CETA) before it has been ratified by national parliaments.

However, it said the government must ensure that only parts of CETA which fall within the competence of the European Union, such as the removal of tariffs, should be allowed to apply provisionally.

This means that the controversial system of investor protection may only come into force following ratification by national parliaments.

In addition, it must be possible for Germany to unilaterally terminate the provisional application of the accord, said Andreas Vosskuhle, president of the court.

The ruling is a shot in the arm for the EU’s trade policy and for German Economy Minister Sigmar Gabriel who has championed the agreement as Europe’s best chance to shape the rules of globalisation.

In a week’s time, EU trade ministers are due to vote on CETA, which requires unanimous support. Brussels and Ottawa then hope to sign the accord on Oct. 27. The European Parliament would also need to vote to allow parts of it to go into force.

Opponents argue the deal in undemocratic and will undermine workers’ rights and worsen standards for consumers.

The accord still faces headwinds from elsewhere in Europe.

Southern Belgium is set to block the deal, while backing from Slovenia remains uncertain.

Austria’s chancellor, who has expressed strong objections to CETA, said his decision on whether to back the deal would depend to a large extent on the German court’s ruling. Earlier on Thursday he struck a conciliatory tone, saying many of his concerns had been addressed in an additional declaration.