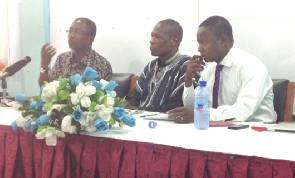 They made the demand when they presented a petition to the President, demanding that the country should not initial the ECOWAS-EPA, which is scheduled for consideration by ECOWAS ministers on March 25 and 26, 2014.

The EPA is the framework being proposed by the European Union (EU) to developing countries like Ghana to address issues relating to unfair preferential trade agreements. However, far from redressing the challenges, civil society groups say that the agreement worsens the plight of countries which sign onto it and extinguishes any control that the country may have over its productive capacity.

At a press conference after the delivery of the petition to the President, the coalition, made up of the Economic Justice Network of Ghana, the Trades Union Congress (TUC), the Ghana Chamber of Commerce, the Christian Council of Ghana, the Catholic Secretariat and the Socialist Forum of Ghana, told the media that the disadvantages of signing onto the partnership far outweigh any benefits.

A meeting of trade ministers in Yamoussoukro in Cote d’Ivoire on March 25 and 26, 2014 is to consider the signing of an ECOWAS-EPA agreement. The coalition further asked the President to direct his Minister of Trade not to sign the agreement.

They said signing the agreement would be an indication of how committed the President was to the development of Ghana’s productive capacity, a commitment that the President had given in his State of the Nation Address.

Together with the Deputy General Secretary of the General Agricultural Workers Union (GAWU), Mr Edward Kareweh, and the Executive Director of the Department of Human Development of the National Catholic Secretariat, Mr Samuel Zan Akologo, the Coordinator of the Third World Network (TWN), Dr Yao Graham, said the EPA was all about Ghana opening up its markets with no restraints to import goods from the EU.

In return, Ghana also stood to benefit from the same concessions on its export of goods to the European markets, as well as some aid.

However, the cost of the loss on the tariffs on EU imports into the country was more than the cost the country would incur if its exports were not allowed onto EU markets.

Dr Graham gave the example of Namibia, where the country had strengthened its beef industry and diversified its products for the medium and long-term sustainability of the key economic sector of the country when faced with the same circumstance of limits on its beef exports to the EU markets because it did not sign the agreement.

He said that type of initiative was what was missing in the discourse on the EPAs in Ghana.

Aid dependent or economic independence? Dr Graham added that another pressure being put on countries to sign onto the EPA was the withholding of aid.

He said all developed countries achieved development by strengthening their productive capacities.

According to him, no country could develop by being locked in a perpetual cycle of dependence on aid, thus, the government had to take the right decision to lead the country to develop its productive capacity, or choose to lock Ghana up in a cycle of poverty and dependence on aid.

Dr Graham said a more worrying development was the fact that after signing the EPA, countries then had to, within six months, fully liberalise investments, government procurement, intellectual property and capital accounts.

He said liberalising capital accounts meant that the government would have no control at all over its foreign accounts.

In the light of the challenges the country was having with the depreciation of the cedi, that, he maintained, would spell doom for the economic prospects of the country as foreign firms and investors would at will, and riding on the back of speculative capital, manipulate foreign funds to the detriment of the economy.

In relation to procurement, signing the EPA would mean that foreign companies would also have the same opportunities in government contracts; an area reserved for local firms to encourage their growth.

Responding to questions, the coalition said they would also engage Parliament and all others to ensure that the future of the country was not mortgaged. The coalition reported that the Minister of Trade had indicated a national consultation on the EPA in April.

They pointed out, however, that a national consultation should have been organised before the meeting in Cote d’Ivoire as that would have been the basis for any action on the EPA by Ghana.

In 2007, Ghana initialled an interim EPA. Cote d’Ivoire has fully signed onto it with Nigeria refusing to sign.