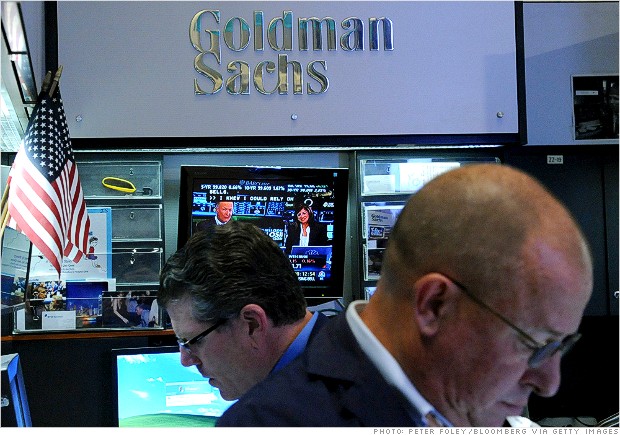 (Bloomberg) — Goldman Sachs Group Inc. is exhorting the U.S. to quickly complete a treaty with China to open the long-sheltered market of the world’s most populous nation to American banks and other firms.

Goldman Sachs’s urgency contrasts with another important part of corporate America. Silicon Valley is wary of any deal that wouldn’t address broader issues, including the potential unauthorized use of technology by Chinese partners who then become competitors.

While Wall Street is eager to manage more Chinese money and underwrite more Chinese securities, other companies want negotiations that would also include promises that state-owned firms play by market rules without protection from the government.

Goldman Sachs is ready to move ahead without resolving such concerns.

“The opportunity is now,” Mark Schwartz, the chairman of Goldman Sachs’s Asia Pacific business, said in an interview. “After 35 years in the business, one of the things I’ve learned is that there is a time and moment to do a deal. And that moment is now.”

Schwartz said he’s “not certain” that state-owned firms are “something we have to be worried about” in a treaty. “Just being a state-owned enterprise itself doesn’t confer advantages,” he said.

Although Goldman Sachs is leading the charge in the financial industry, it’s not alone. In a letter to President Barack Obama last October, 51 chief executives called for action on an investment treaty. They included the leaders of Archer-Daniels-Midland Co., Ford Motor Co., Wal-Mart Stores Inc. and Westinghouse Electric Co.

“It was a message meant to resonate in Beijing,” John Frisbie, president of the U.S.-China Business Council, said in an interview. “It tells the Chinese we are willing to fight to get this approved.”

This week, Goldman Sachs will host a conference of American and Chinese chief executives at its New York headquarters — one that will include top U.S. government officials — to drive home the need for action. The gathering is a follow-up to a similar one in Beijing in July.

Even as the U.S. negotiates a high-profile trade agreement with 11 other Pacific nations, the Obama administration is entering a critical phase of a quieter negotiation with China, known as a bilateral investment treaty.

Begun in 2008, the talks languished until November, when Obama and Chinese President Xi Jinping agreed to jump-start the negotiations. For Obama, a deal would fit into his larger goal of shifting attention toward Asia after decades of focus on Europe.

Early this year, the U.S. and China will exchange lists of industries they want to keep closed to foreign investment. Since the U.S. is already open to investment save for a few areas, this phase is seen as a test of Chinese sincerity in relaxing the environment for foreign firms. This month, China published a new investment law that, on paper, pledges equal treatment for Chinese and foreign companies.

Schwartz said that the “impetus of a big international agreement” with the U.S. would help turn the principle China enunciated this month into reality.

The purpose of a treaty would be to open segments of the Chinese economy where foreign investment is barred or severely restricted. U.S. banks would be able to own Chinese subsidiaries outright. Retailers could run their own distribution networks. Manufacturers could build products in China without having to partner with a Chinese company.

Yet technology companies like Qualcomm Inc. and Microsoft Corp., weary of fighting battles where their competitors in China can be backed by the government, are much more skeptical of a U.S.-China deal, said Robert Atkinson, president of the Information Technology Innovation Foundation, an industry-affiliated research group.

The tech industry would prefer no deal at all to one that would simply open the Chinese market without broader rules, Atkinson said. And the companies have leverage. Obama will have to submit the treaty to the Senate for ratification by a two-thirds majority, a high bar in today’s Washington. If corporate America remains divided, the chances of a treaty in the Senate could be imperiled.

“You have a Wall Street force and a Silicon Valley force buffeting the Obama administration,” Atkinson said in an interview. “And they are not in synch.”

David Cuddy, a Microsoft spokesman, declined to comment on the U.S.-China negotiation. Emily Kilpatrick at Qualcomm didn’t respond to requests for comment.

Financial services, unlike most U.S. industries, can benefit from Chinese enterprises becoming globe-straddling giants, without having to compete with them, a point Schwartz acknowledges. For example, Chinese banks reaped 0.02 percent of fees for underwriting debt and equities in the U.S. in 2014, while 46 percent went to the top five underwriters, one of which was Goldman Sachs, according to Dealogic.

Foreign manufacturers now often have to enter joint ventures with Chinese firms to invest there, and bring patents — proprietary technology — into the new company, which gives a potential future Chinese competitor access to valuable assets that can be used worldwide.

Financial firms have to work through joint ventures, too — Goldman Sachs owns just 49 percent of its Chinese business — but don’t face the same “serious, almost existential threats” as the tech industry, Atkinson said.

“Whatever the Chinese get from those joint ventures isn’t scalable to the rest of the world,” Atkinson said. “They can’t attack U.S. financial services companies in other markets.”

Lu, the Chinese researcher, said China is restructuring state-owned companies to diminish their influence on the economy. “To make them give up their power is not easy, but it will happen,” Lu said.

Schwartz doesn’t dispute the point that Goldman Sachs has ways of profiting from the Chinese market without facing new competition from Chinese companies.

“We expect that over time we will advise on a lot of cross-border Chinese M&A deals. It will be a bigger and bigger business,” Schwartz said.

The U.S. Chamber of Commerce has urged the Obama administration to use the treaty to impose rules on state-owned firms. The U.S. needs to “ensure that any market access gains on paper are matched in the negotiations” with rules on Chinese state-run companies, the Chamber wrote U.S. Trade Representative Michael Froman on Oct. 1

The New York conference this week will include Hank Paulson, the former Goldman Sachs CEO and Treasury Secretary who founded an eponymous policy-research group in Chicago that deals partly with China, will be there. So will Robert Zoellick, a former U.S. Trade Representative and now chairman of Goldman Sachs’s international advisers, who has written editorials in major newspapers favoring the company’s position.

Current trade representative Froman and Secretary of Commerce Penny Pritzker will also attend. Matt McAlvanah, a Froman spokesman, declined to comment on the treaty negotiations, or the closed-door conference.

Goldman Sachs co-hosted a similar gathering in Beijing in July with Chinese CEOs and Goldman Sachs’s own, Lloyd Blankfein. The added twist: Blankfein, Schwartz and Zoellick all met with Chinese President Xi, a rare honor for a single company. Paulson was also there.

Atkinson, from the technology foundation, questions the premise of even negotiating with China, given the problems for U.S. companies.

“It does send a message that we essentially are saying to China, ‘We believe what you are doing is OK right now, and we’ll just negotiate with you,’ and I don’t think that’s the right message,” Atkinson said.

Qualcomm, the San Diego-based maker of chips for mobile phones, hasn’t been able to collect licensing fees on handsets that could be used on the network of China Mobile, the state-backed wireless carrier. The government has also banned use of some Microsoft software, which has also faced rampant piracy.

Chinese regulators Monday fined Qualcomm $975 million and set licensing rates for its mobile phone chip technology after finding the company guilty of antitrust violations. Together with Chinese government investigations of Microsoft Corp. and Symantec Corp., the decision adds to concern that China uses such actions to boost its own enterprises.

Visa Inc. has fought a years-long battle over privileges granted to China UnionPay Co., the dominant payment system. General Electric Co. competes with state-owned companies, sells to them and partners with them in areas such as transportation, health care and energy.

Josef Skoldeberg, a GE spokesman, declined to comment on the U.S.-China negotiation. Paul Cohen at Visa didn’t respond to requests for comment.

Goldman Sachs has rallied the business council to its position that the Obama administration should jump on a deal if China lets U.S. companies in. Like-minded American executives will attend Goldman Sachs’s conference this week.

“If significant market openings are put on the table, we should seize the opportunity to quickly finalize the treaty,” the council’s president, Frisbie, wrote Froman on Sept. 17.

To contact the reporter on this story: Carter Dougherty in Washington at [email protected]