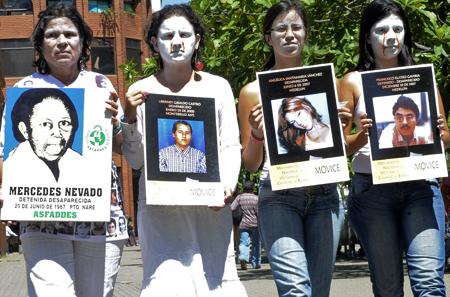 Human rights, development, and labour groups "have serious misgivings about the Canadian government’s commitment to carry out a meaningful assessment of the human rights impact of its controversial free trade agreement with Colombia," says a press release from Amnesty International Canada and the Americas Policy Group at the Canadian Council for International Co-operation.

This is the third time the Conservative government has attempted to produce an impact assessment of its 2011 FTA with Colombia, as required by law, and each time the final report has been completely inadequate.

This year, "interested parties" were given just six working days — between March 19 and March 26 — to submit input on a government website. Despite their longstanding engagement with the Canadian government, human rights and development groups were not provided with details on how to participate in the consultation until after it was launched online.

"Under these conditions, it is hard to see what meaningful input the government will receive. In fact, it raises serious questions about the intentions of the government," says Alex Neve, Secretary General of Amnesty International Canada, in the release. "It is of great concern that the government seems uninterested in hearing from people and organizations that have firsthand information about the scope of human rights violations on the ground, absolutely essential — in fact, central — input for any reliable human rights impact assessment."

"Time and time again, the Colombian and Canadian governments have assured us that the Canada-Colombia Free Trade Agreement (CCFTA) would help improve the human rights situation. Yet in 2013, there were 26 assassinations of trade union activists and leaders, 4 more than in 2012," states Robyn Benson, National President of the Public Service Alliance of Canada (PSAC). "We’ve also witnessed greater repression and violence perpetrated against those who are viewed as obstacles to the mega-development of Colombian oil, mining and agriculture resources, sectors that have been opened up to foreign investments through the free trade agreement."

As we wrote last July, in the 2012 human rights assessment, "Trade Minister Ed Fast said there wasn’t enough data to produce a full report, which he promised for 2013. This was already seen as a failure. A year later, the government still has no data. Several voices, including at the Globe and Mail, are condemning this second impact assessment for being devoid of any reference to human rights violations in Colombia.

"In a few paragraphs," wrote Campbell Clark in the Globe, "they decided it’s ’not possible’ to establish a direct link between Canadian trade and human rights. The rest of the promised information was missing."

The gravity of the human rights situation in Colombia was underscored at a Round Table on Parliament Hill on February 5 at which Indigenous rights defenders presented disturbing testimony to the All-Party Parliamentary Group for the Prevention of Genocide and Other Crimes against Humanity about threats, attacks and assassinations of Indigenous people in areas of Colombia earmarked for resource extraction, including regions where Canadian companies are present. Threats, attacks and assassinations of trade unionists in Colombia continue, as does a pattern of deadly violence against community members seeking the return of lands that have been misappropriated under cover of the ongoing internal armed conflict in Colombia, or who oppose use of land for economic megaprojects.

"Members of the APG continue to call for a credible, independent human rights impact assessment of the CCFTA to be carried out at regular intervals, as a mechanism of due diligence to ensure the agreement does not exacerbate an ongoing human rights crisis in Colombia," say the groups. "Furthermore, we expect a reasonable opportunity to contribute to this process for both Canadian and Colombian organizations that have been monitoring human rights in Colombia for decades."