By Alan Beattie and Anna Fifield 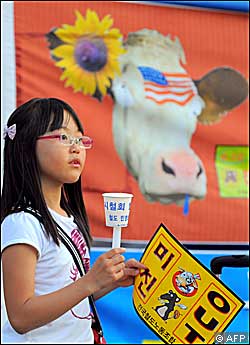 Critics of bilateral trade pacts that are heavy on symbolism but light on content often ask: where’s the beef? In the case of South Korea’s deal with the US, which has plunged the Seoul government into crisis, the question is more than metaphorical.

Protests against imports of American beef (see picture), which have brought thousands of Koreans on to the streets, highlight problems with the White House’s policy of “competitive liberalisation”, or trying to bring down trade barriers worldwide by signing a flurry of bilateral and regional deals. With other leading economies also encountering difficulties in signing such pacts, are the wheels coming off the bilateral bandwagon?

Richard Baldwin, professor of international economics at the Graduate Institute of International Studies in Geneva, says of the Korea fracas: “This shows that the idea that regionalism is easy and multilateralism is hard has been massively overblown.”

In theory, it should be much easier to agree bilateral and regional deals, particularly between countries at similar stages of economic development, than among the 152 members of the World Trade Organisation. The number of such deals in force (which their advocates call free trade agreements, though many economists say they distort trade) has risen from a dozen in the mid-1990s to around 200, with the US often leading the way.

Rob Portman, the former US trade representative who is now at the law firm Squire, Sanders & Dempsey in Washington, defends competitive liberalisation: “It has been remarkably successful over the past seven years,” he says. “From a US perspective, it seems to be working well.”

The administration of President George W. Bush has won the congressional votes approving each of its pacts. Yet bilateral deals allow trade lobbies to concentrate their fire, whereas they can struggle to make themselves heard in wider negotiations. This applies particularly to the US, which applies the same demanding model in each negotiation. Prof Baldwin says: “There is a narrow and oddly-shaped coalition in Congress that needs to be happy before any deal can pass.”

To win approval on Capitol Hill, sensitive sectors such as sugar and cotton need to be protected, while the main agricultural exporters, including beef and pork farmers, must gain in market access. Prof Baldwin says this non-negotiability helped, for example, to stymie trade talks between the US and Switzerland on which he advised. “We thought we could do a deal where Switzerland wouldn’t export chocolate and the US wouldn’t export beef but the Americans wouldn’t accept it,” he says.

Mr Portman accepts the legislation that grants negotiating authority to the White House gives it little leeway. “We do not have the flexibility to be able to carve out special protections under our current law, nor do we have the ability politically to take agreements to the Hill that do not provide for market openings across the board,” he says. “I acknowledge that is a challenge.”

This explains the non-negotiability of beef in the Korean deal. Though beef is not formally part of the pact, Washington made it clear that congressional approval would require Korea to resume imports of the meat, suspended in 2003 following a US outbreak of BSE, the “mad cow” disease. As one congressional aide says: “The proof is in the porterhouse.”

President Lee Myung-bak, who took office in February, hastily announced in April that the Korean market for US beef would be fully opened. Given the importance of the US to Korean exporters, the economic case to follow through on the promise was clear-cut.

“Any change would be worse, not better, for Korean interests,” says Shim Jae-hoon, a veteran political commentator. “South Korea imports 5,000 units of American cars while annually shipping 800,000 to US markets,” he says. “Seoul’s controversial position on beef - at most worth $800m [£408m, €518m] a year - appears set to invite US retaliation worth several billions of dollars.”

But Mr Lee’s action took Koreans by surprise and became a lightning rod for the public’s increasing unhappiness with his high-handed leadership style. There is also disgruntlement at having to accept terms the US dictates, especially given the presence of US troops on the Korean peninsula. The fear of a domestic backlash has helped to stall US talks with Thailand and Malaysia, two of its other big trading partners in east Asia. Most of the deals Congress has approved so far are with relatively small countries.

Securing even those agreements is becoming harder. The politics of trade in the US itself is also explosive, given widespread suspicions among the Democrats of the effects of trade and globalisation. A framework for trade deals between the congressional leadership and the White House, agreed in May last year and involving tougher rules on labour law and environmental standards, was enough to get through a deal with Peru. But the next agreement that came down the pipeline, a pact with Colombia, has caused the already sour relations on trade between the White House and Capitol Hill to turn poisonous.

The Democratic leadership in the House of Representatives, saying the administration was forcing a vote on Colombia without due discussion, invoked an unusual procedural move to prevent the pact coming to a vote. Fred Bergsten of the Peterson Institute for International Economics in Washington, says of that decision: “It undermines the whole basis for international confidence in the US as a trading partner.”

Though few other commentators were as alarmist, both the stalled Colombia deal and the Korea beef episode illustrate how trade talks can become intertwined with political symbolism that far exceeds their actual economic impact. Much of the White House rhetoric in the Colombia stand-off has been geopolitical, not economic, arguing that this is no way to treat a strategic ally struggling against narcoterrorism. It was most likely a wish to dodge this accusation that led Congress to stop the bill coming to the floor rather than having to vote it down. But whatever the motives, competitive liberalisation has ended up with the White House expending a huge amount of time, energy and limited political capital, including sending multiple cabinet secretaries on trips to Colombia, to pass a deal covering less than 1 per cent of US trade.

It would be extrapolating too much from the US experience to suggest that bilateral and regional trade diplomacy around the world has stalled. Some other big trading powers are having less difficulty negotiating agreements. But deals delivering deep and broad liberalisation, particularly involving developing countries, remain an endangered minority.

The European Commission, after a long hiatus, resumed negotiating bilateral and regional trade deals in earnest last year, its first targets being South Korea, India and the Association of South-East Asian Nations. The European Union has some advantages over the US when concluding trade deals, though these have the effect of making the pacts narrower and shallower. In particular, EU farmers tend to be less competitive than their American counterparts, meaning there is less interest in prising open foreign agricultural markets, and the politics is often easier to manage, Europe being less frequently regarded as a threatening hegemonic power.

The EU says it hopes to conclude talks with Seoul by the end of this year, the main sticking point being Korean automotive regulations that European carmakers say are protectionist - these also bedevilled the US-Korea negotiations. But concern within Korea over the US deal is undoubtedly spilling over into the talks with Brussels, which are well behind schedule.

Beyond cars, the larger problem is that, perhaps stung by the suggestion that it gave away too much in the American negotiations, Seoul is offering Brussels a less generous deal. During one round of negotiations, Ignacio Garcia Bercero, the EU’s chief negotiator, noted differences in the two sides’ “level of ambition”, adding that he would not be able to sell an inferior deal to the Union’s 27 member states. EU trade worth about $10.5bn was being treated worse than the US, he said.

But Mr Bercero also conceded that, in trying to speed up the talks, the EU had underestimated Korea’s penchant for robust negotiation, admitting that the first offer Brussels made was too generous and did not leave much room for bargaining.

The EU’s talks with India are even less advanced. One EU official says the chances of a deal this year are slim. “It is still not entirely clear what the Indian requests are,” the official says. Some of the significant interests for Europe’s companies, such as retailers and banks wanting to expand in India, are in sectors that Indian corporate groups have been most fiercely lobbying their government to keep closed.

One of the Indian government’s motives in engaging with the EU is to secure through trade pacts the domestic deregulation it finds hard to achieve unilaterally, for example in allowing foreign express delivery services to operate freely in the country. But New Delhi has complained that it needs something in return and that its main demands in talks with the EU cannot be delivered by the Commission.

India’s information technology and business processing companies are among its most competitive and active exporters. Many of their demands involve the right to set up operations in Europe and send staff there, if only temporarily. But such decisions often remain in the hands of EU member states, which are unlikely to cede control over immigration and border control policy to Brussels in the short to medium term. “From the perspective of our trading partners, it is frustrating that they cannot get a comprehensive answer to their questions,” the EU official admits.

The EU’s attempts to negotiate collectively with Asean are meanwhile foundering on the near-impossibility of getting a broad and detailed agreement with a grouping of economies that range from one of the richest in the world, Singapore, to a least-developed country such as Laos.

More generally, economists say that differences in economic development and competitiveness mean that most intra-Asia trade pacts are currently generating more flows of talk and ink than movements of goods and services. They certainly are not adding up to serious advances for reciprocal liberalisation.

Prof Baldwin points at an unhelpful combination of sensitivities among the big three trading powers of east Asia. The collective positions of Japan, South Korea and China reflect the sum of their fears. “Japan and Korea won’t accept free trade in food if they sign with China; the Chinese are afraid of being locked into low-end manufacturing if they sign with Japan or Korea; and Korea is concerned at being squeezed competitively between Japan and China if it signs with Japan,” he says. “This combination has brought everything to a halt.” Japan and China are separately signing a flurry of bilateral deals with other countries around the region but many of these are limited in coverage.

In the end, particularly if the so-called Doha round of multilateral trade talks continues to go nowhere, the fear of having other countries steal a march on Washington by signing their own deals may bring Congress back to the negotiating table. Mr Portman says: “Other countries are reaching out and the impact on the United States is very clear, because we are now going to be losing market share.” But it has also become clear that doing trade liberalisation step by step involves travelling a much bumpier road than at first appeared.