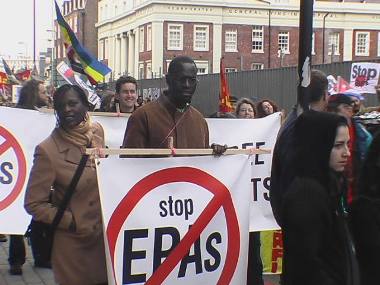 A copy of the EPA that MPs ratified Tuesday will be submitted to the European Union as proof of Kenya’s commitment to boost free trade with the 27-member bloc.

“The minister will have 10 days to notify the EU council of the ratified agreement to save our exports from duties once we hit the October deadline,” National Assembly Majority Leader Aden Duale said.

The East African Community (EAC) states have negotiated EPAs in the last 10 years without conclusion. On September 1, Kenya teamed up with Rwanda to sign the pact that MPs ratified Tuesday.

The regional bloc’s presidents who met in Dar es Salaam a few days ago asked for up to January to review the EPA’s legal text.

On Tuesday, Mr Mohamed hailed Parliament for ratifying the agreement saying that Kenya’s interests are were now safeguarded.

He said Kenya could not risk its EU markets and face a Sh10 billion-a-year tax on exports.

“This is the best deal for Kenya because if we failed to sign we would have been subjected to other conditions which the rest of our neighbours are not subject to. We had to do it before October 1 to enjoy access to the European markets,” he said at a press briefing in Nairobi.

Kenya, the only State classified as developing country among the EAC’s six members, ships close to 32 per cent of its exports to Europe. Last year, it exported Sh581 billion worth of products to different parts of the world.

The rest of the members have alternative access to EU market as they are classified as least developed countries that have duty- and quota-free access under EU’s Everything But Arms initiative.

The MPs, who had been recess since September 1, were recalled to ratify the pact just 10 days before the deadline.

The MPs urged the EAC states to speed up the process but insisted that the standoff would not hurt trade relations in the bloc.

“We will not jeopardise or undermine our larger commitment to East Africa or our negotiations in East Africa as a bloc,” said Mr Duale.

“Kenya ratified position to protect its interests. Kenya is a middle income country that is subjected to unique conditions compared to other EAC countries that have automatic access due to their least development country status,” said the business leaders.

The EU parliament is expected review Kenya’s position and decide whether or not to delay imposing duty.