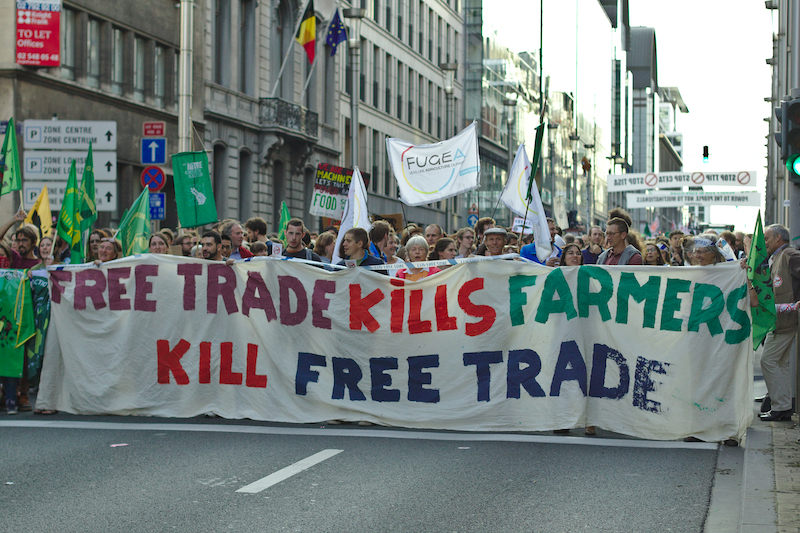 In less than half a year, the coronavirus pandemic has fundamentally reshuffled the cards of economic globalisation. Complex supply chains, the international division of labour, and just-in-time operations have grown over the past thirty years. Their dysfunctionalities are now a source of crisis, not resilience.

The pandemic brings into stark relief the underlying structural vulnerabilities the economic system has generated for people and the planet. Instead of helping us overcome the pandemic, the neoliberal trade and investment regime has made it harder to respond to this crisis, given our dependence on large and unstable globalised production chains.

This problem was exemplified in the case of personal protective equipment (PPE), which was produced in only in a few countries, and was not available where and when it was most needed. Efforts to develop a vaccine are complicated by intellectual property rights that ensure huge profits to pharmaceutical corporations while the cost is paid for with taxpayer money. Many emergency measures taken by governments to protect public health during the pandemic risk coming into conflict with the global investment protection regime. As a result, governments around the world could face a new wave of costly Investor-State-Dispute-Settlement (ISDS) cases.

The pandemic is particularly severe for vulnerable parts of the population. People in the Global South are hit exceptionally hard, as they are already suffering from the dirty practices of multinational corporations, unpayable debt burdens and the consequences of a climate change they haven´t caused. In fact, climate change will be further exacerbated if government economic policies do not fundamentally change course. We are concerned that the European Union and its member states continue to push for more neoliberal trade and investment agreements, such as the recently concluded EU- Mexico agreement or the heavily criticised EU-Mercosur agreement. Now is the time to step back and re-evaluate our trade regime rather than continuing on the same unsustainable path that has continuously failed us.

In 2013, over 50 civil society organisations put forward the Alternative Trade Mandate in a call to change the international trade system and the EU’s trade and investment policy. Since then, the climate and ecological crises have dramatically worsened and inequality has further increased. Today, in the midst of a world-wide pandemic, the call for the alternative mandate is more urgent than ever. In many countries, popular support for deepening liberalisation is waning as people experience its negative impacts both personally and on society and the planet. We need immediate structural change.

The Seattle to Brussels Network believes the following three principles should guide the EU response to the multiple crises we are currently confronted with:

Principle I: Stop and reset the current trade and investment regime

Covid-19 is not just a health crisis. The pandemic is laying bare the systemic deficiencies that fed the various crises we have been facing for years. Trade and investment agreements, whether in bilateral deals or within the World Trade Organization, have played a huge part by weakening public sectors, by liberalising them and fostering their privatisation. Supply chains have grown longer, more complex, and less transparent. Production of crucial goods, such as pharmaceutical and medical equipment, has been outsourced to private companies. At the same time, dispositions in trade and investment agreements have fixed the position of countries in the Global South as suppliers of raw materials, hampering their economic diversification, and increasing their dependence on imports from industrialised countries. Increasing international trade flows has taken precedence over the protection of human rights and the planet. We therefore call to:

The current neoliberal trade and investment regime severely curtails our democracies. The kinds of emergency measures taken by governments in the health crisis could be challenged under the rules of the current regime of investment protection. The Investor-State-Dispute-Settlement mechanism (ISDS), part of many bilateral investment treaties, allows transnational corporations to sue countries for democratic decisions that might harm corporate profits. ISDS is extremely costly for the public and often means that governments abstain from necessary measures for fear of the potential costs. Measures to address the climate and environmental crises, including the phasing out fossil fuels are the most targeted.

We must establish a global order that does not make societies pay for taking democratic decisions. While our democracies are undermined by a system of investment treaties, it is almost impossible to hold corporations accountable for the human and environmental rights abuses they commit in their search for ever higher profits. Democratic decisions and human rights must prevail over private interests, and transnational corporations impunity must be dismantled:

Rather than pursuing the unsustainable neoliberal world market and the xenophobic and nationalist measures taken by more and more governments, we should choose another path: that of ecological and social relocalisation, built on strong international solidarity. The aim is not to repatriate a few strategic factories, but to put people’s needs first by rebuilding our economies rooted on the local level in good social and ecological conditions.

This requires restoring the capacity of States, local authorities, and populations to have the legislative, legal, fiscal, and economic means to decide their needs and how to provide for them. Additionally, we need to fundamentally restructure trade and investment rules and institutions to protect basic needs (health, housing, education, access to water, energy and food). These priorities must inform decisions on preference for local suppliers. Relocalisation does not mean giving up international trade that is based on complementarity, cooperation, and solidarity.