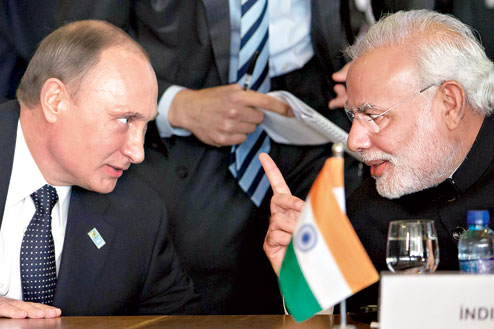 Prime Minister Narendra Modi and Russia President Vladimir Putin are expected to discuss a proposed free trade agreement (FTA) between India and the Russia-led Eurasian Economic Union (EAEU) at a summit meeting on 1 June amid signs that India may oppose including e-commerce in the pact.

A joint feasibility study (JFS) group that has recommended launching negotiations for the FTA advocated including e-commerce as a deliverable.

The EAEU, which also includes Armenia, Belarus, Kazakhstan and Kyrgyzstan has demanded the creation of a common legal framework with India on e-commerce under the proposed FTA. But India holds that it is not ready to include any market access elements in view of the evolving nature of e-commerce laws and regulations.

The JFS group maintained that switching from paper documents would increase security and transparency in supply chains and generate higher revenue.

“Such legal framework would increase trade, streamline business, bring element of certainty to cross-border commercial activities and allow to reduce delays and costs at the border. It is the driver in the modernization of administrations,” the report said.

The JFS has advocated that the EAEU and India could discuss issues such as electronic authentication and digital signatures; private data protection; e-commerce participant protection; cross-border data flows; and use of electronic documents.

EAEU points out that its FTA with Vietnam covers electronic commerce issues, particularly the issue of mutual recognition of electronic signatures and electronic documents.

However, India insisted that it won’t bind itself with a set of principles that could restrict the sovereign policy space for future regulatory development and agreed to discuss only bilateral cooperation issues and sharing of best practices with the EAEU on e-commerce.

At present, India allows up to 100% foreign direct investment (FDI) under the automatic route in business-to-business (B2B) e-commerce activities. However, it does not permit FDI in business-to-consumer (B2C) e-commerce.

India has also rejected efforts to include market access negotiations on e-commerce at the multilateral level. “I am ready to join the talks, but it is not part of my agenda for the upcoming ministerial. Because every country is having a big churn in e-commerce and technology is fast-moving. A final understanding on the matter is yet to be reached. Therefore, it will not be proper to regulate or define e-commerce at present,” commerce minister Nirmala Sitharaman told reporters in New Delhi after a meeting with World Trade Organization (WTO) chief Roberto Azevedo in February.

One of the reasons for India’s reluctance to substantially engage on e-commerce is lack of domestic consensus on the subject though it realizes the growing importance of online trade.

The Declaration on Global Electronic Commerce was first adopted by the WTO’s Second Ministerial Conference in May 1998 and urged the WTO members to establish a comprehensive work programme to examine all trade-related issues arising from global e-commerce. Ministers also agreed to continue their practice of not imposing customs duties on electronic transmissions until their next session.