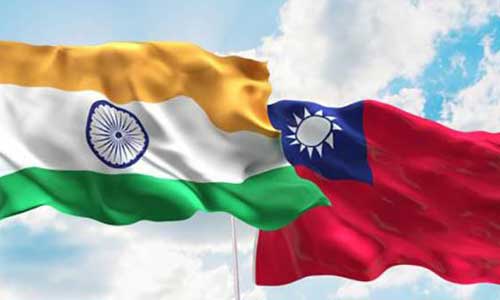 Taiwan is likely to send more mobile phone microprocessors and precision tools to India because the governments of both countries may soon resume discussions on a free trade agreement (FTA), eight years after preliminary talks began.

While official talks are yet to start, Taiwan last month made clear its desire to fast-track discussions while India hopes that a deal may reduce its import dependence on China for crucial products, a senior commerce ministry official pointed out.

The two countries have cultural and economic centres in each other’s territory but no diplomatic relations.

New Delhi had decided against vigorously pursuing investments from Taiwan because it did not want friction with China, which considers Taiwan its own and has refused to recognise the Taipei-based government over the past 70 years.

The country’s bilateral trade with India had grown 11 per cent in 2016-17 to $5.32 billion as businesses from Taiwan, a global hub for precision tools and equipment manufacturing, have increasingly geared up for a larger share of the Indian market, dominated by cheaper, low-precision imports from China.

“We have asked our manufacturers and exporters to find local partners in cities such as Bengaluru, Hyderabad and Ahmedabad after recently being assured by India of full support,” a senior Taiwanese diplomat said.

“An FTA, of course, would be beneficial to trade. Taiwan doesn’t have any FTA with most countries due to political difficulties. As a result, our products have to be more competitive and of better quality,” Walter M S Yeh, president and chief executive officer of the Taiwan External Trade Development Council, told Business Standard. Taiwan has five FTAs alongside two preferential trade deals with China and Singapore. “In most countries, our exports face high import duties but our products are world-class,” Yeh said.

While Taiwanese firms specialising in heavy machinery and engineering tools have figured primarily on the list, original equipment manufacturers for electronic devices are also moving in. New Delhi wants these crucial components to be gradually manufactured at home or imported from other countries rather than being imported entirely from China. The largest of these — Foxconn — assembles electronic parts for Apple smartphones at six places and has plans to increase the number of facilities it operates in India and shore up production, the diplomat added. 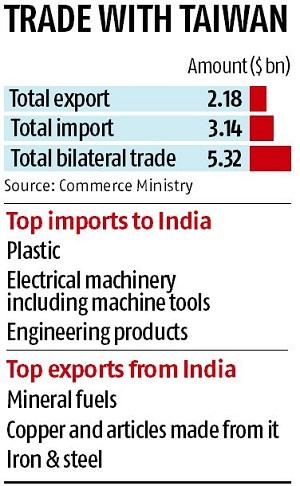 Precision machine tools, part of the larger group of electrical machinery imported from Taiwan, are among the largest single chunks of inbound trade from the island nation. Heavy imports in the crucial sector underline serious gaps in India’s manufacturing capabilities with domestic manufacturers way behind the burgeoning demand. India imported such goods worth $626 million from Taiwan. Similar imports from China were significantly larger at $21 billion in 2016-17.

“While it may sound ambitious for Taiwan to match such figures, we have encouraged traders to diversify import orders from various nations,” a government official said.

“More than 80,000 Taiwanese companies are operating in China and 25,000 in Southeast Asia, while 110 have currently invested in India, so there’s clearly huge potential for growth,” James C F Huang, chairman of TAITRA, told Business Standard.