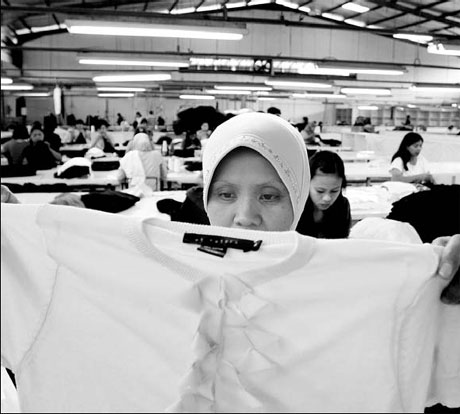 The Indonesian Trade Ministry is in talks with its Chinese counterpart to discuss trade data that apparently suggests that both countries are suffering from a trade deficit.

“The joint committee [of both countries] will develop a common understanding after comparing the trade date issued by each country and finding differences on statistical definitions,” Trade Minister Mari Elka Pangestu said to journalists at a press conference in Jakarta on Friday.

The committee already held its first meeting in July to exchange the trade data of both countries after the full implementation in early January of the free trade agreement between China and the Association of South East Asian Nations (ASEAN), of which Indonesia is a member.

She said that the data provided by Indonesia and China, showed both of them were suffering a trade deficit against each other. As quoted by Bisnis Indonesia, Chinese Vice Ambassador Yang Lingzhu said that China suffered a US$250 million trade deficit with Indonesia in the first five months of this year. Meanwhile Indonesia’s imports from China increased by 85 percent to $8.11 billion, while its exports increased by 79 percent to $7.86 billion.

Mari did not disclose any figure on bilateral trade between China and Indonesia during the first five months of the year. But, according to data released by the Central Statistics Agency (BPS) on Wednesday, Indonesia suffered a trade deficit of $3.99 billion during the first seven months of the year with imports worth $10.96 billion from China and exports worth $6.97 billion.

“The joint committee will meet again at the end of this year to analyze the data and discuss necessary measures to synchronize statistics reports,” Mari said. The minister said that Indonesia would try hard to improve its exports to China to balance the two-way trade in line with its efforts to boost its non-oil and non-gas exports worldwide.

The BPS says that Indonesia’s non-oil and non-gas exports increased by 36.9 percent to $69.97 billion during the first seven months of the year, while total exports jumped 42.26 percent to $85.01 billion.

Mari said that based on a pessimistic projection, the country’s monthly non-oil and non-gas exports were likely to increase by 16 percent in the coming months assuming the global economy would not yet recover well from its downturn.

She reminded listeners that there would be a few factors that would cause slow export growth, inducing slow economic growth in developed countries, such as the US and European countries.

But based on an optimistic projection that the global economy would recover well, the country’s monthly non-oil and non-gas exports would most probably increase by 18 percent in the rest of the year, Mari said.

“Asian countries will still contribute most [to global growth],” she said, adding that growth, however, would be a little bit slower due to China’s decision to reduce its stimulus package.