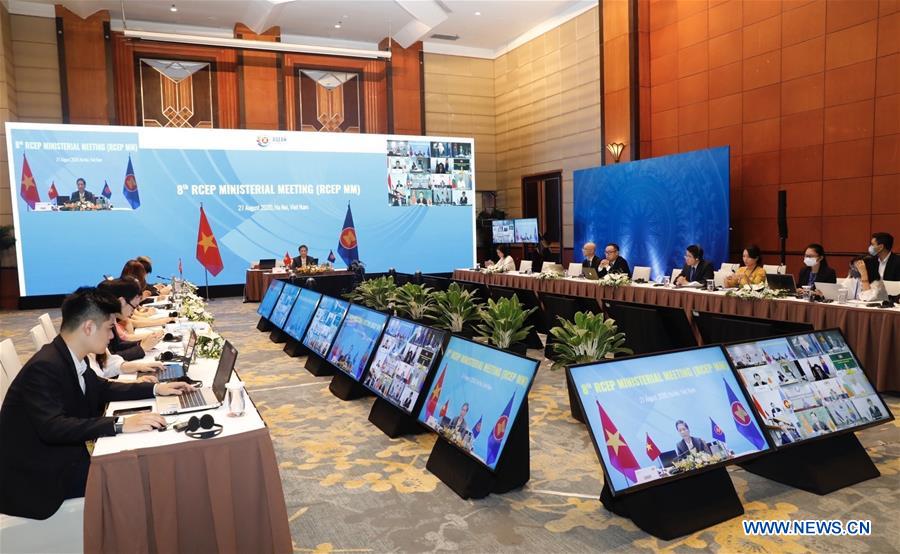 There’s videoconferencing, and then there’s trying to hammer out the world’s biggest trade deal remotely.

"We’ve gotten used to negotiating online," said a government official from one of the 15 Asia-Pacific countries involved in the Regional Comprehensive Economic Partnership, or RCEP. "Having said that, meeting online is different from meeting in person. Negotiations are much harder. The informal meetings on the sidelines were really important to get things done."

But while COVID-19 is preventing in-person discussions between the 10 members of the Association of Southeast Asian Nations plus China, Japan, South Korea, Australia and New Zealand, the pandemic is also motivating them to finalize the deal after several failed attempts to cross the goal line.

With economies suffering historic contractions due to the virus, RCEP is now seen as a catalyst for a reboot.

For some key players, though — especially Japan and Australia — these hopes are mixed with nagging concerns about a pact in which China’s presence looms ever larger.

When RCEP was first announced at the ASEAN summit in 2012, it included another emerging power: India. The grouping was billed as a partnership encompassing over 3.5 billion people and about one-third of global gross domestic, surpassing the European Union and the North American Free Trade Agreement. The Asian Development Bank in 2016 estimated RCEP would generate $260 billion worth of global income benefits.

The talks gained momentum in 2018, as U.S. President Donald Trump waged his tariff war with Beijing and RCEP participants saw themselves as standard-bearers for free trade. But then, last November, India announced it was pulling out, mainly over fears that its agricultural sector would be swamped with imports.

For a moment, the entire deal seemed in danger of unraveling. Nevertheless, the remaining 15 nations completed negotiations "on the text as well as agreement on virtually all market access issues." That was just months before COVID-19 swept the world.

In August, they announced "significant progress" on the final details and said they would be ready to sign in November 2020. While the online talks have made legal scrubbing — a process in which lawyers, translators and staffers review and correct the text of the agreement — more cumbersome, Philippine Trade Secretary Ramon Lopez recently reiterated that the deal "should be done" this year.

The megadeal has taken on even greater significance as some nations appear to sour on a partially overlapping trade framework, the Comprehensive and Progressive Agreement for Trans-Pacific Partnership, or CPTPP.

It has been a bumpy road for what was once simply the Trans-Pacific Partnership. Trump pulled out in one of his first acts as president, leaving the remaining countries scrambling to save the agreement.

Now Malaysia, one of the 11 signatories, is dragging its feet on ratification as new Prime Minister Muhyiddin Yassin’s government reviews controversial chapters — and teeters on the brink of collapse.

Azmin Ali, the country’s international trade and industry minister, said ratification is on hold pending discussions on areas including procurement and investor-state dispute settlements. "We are not having doubts about the CPTPP... but at the same time we need to understand and appreciate the need and the challenges faced by local and domestic industries," Azmin said.

Thailand, which is not a signatory but had expressed interest in joining, also looks more hesitant to expose its industries to the CPTPP’s tariff elimination and other provisions, which go further than RCEP.

The Thai parliament in June set up a special panel to study the CPTPP’s pros and cons. The report is expected by the end of September, but Prime Minister Prayuth Chan-ocha is unlikely to rush a decision, government sources said. While the cabinet is preparing to grant approval for RCEP ahead of the ASEAN summit in November, the people said the CPTPP is no longer high on the agenda.

The U.K. has shown growing interest in joining the CPTPP, which would lend the deal more weight. But fading enthusiasm in Southeast Asia, coupled with RCEP’s momentum, presents a conundrum for Japan and Australia.

"We need to make sure that [the final agreement] does not look as though Japan is participating in a China-led initiative," said one official at Japan’s Ministry of Economy, Trade and Industry, which oversees the RCEP negotiations.

Australian unease might be even more acute, given how the country’s relationship with China has rapidly deteriorated. Tensions over alleged Chinese political interference, 5G market access and other matters have brought ties to the worst point in decades.

Australia is not giving up hope that India can be coaxed back to RCEP. Simon Birmingham, the Australian trade minister, has stressed that "the door remains open."

Tim Harcourt, an economist at the University of New South Wales, said he thinks "the government is still trying because India’s significance has increased in the region."

"They will at least try and bring them back in a future stage," said Harcourt, the former chief economist of Australia’s international trade promotion and investment agency, Austrade. "We are seeing a political push toward India."

Yet, the message from New Delhi remains a resounding "no."

When it comes to free trade agreements and alliances, "the only imperative ... is our national interest," Indian Foreign Secretary Harsh Vardhan Shringla said on Sept. 4. "RCEP did not seem to be something that would be in our interest, both now and in the future."

This leaves Japan, Australia and others with a choice to make. Either scrap the hard-won gains and the hopes for energizing pandemic-hit economies, or forge ahead.

Everyone seems to have opted for the latter.

"RCEP’s original purpose still makes sense, even without India," said Simon Tay, chairman of the Singapore Institute of International Affairs. "Last year, at the ASEAN summit, when it was clear that India did not want to come on board, there was some sense that we shouldn’t go ahead without India. Of the two choices, I think we made the wiser one — to go ahead, and leave the door open to India."

Tay added that the key now "is for us to demonstrate that RCEP is meaningful, it is beneficial," and that it does not cause the "pain" India fears.

For ASEAN participants, sticking to RCEP even without India is a given. The new Japanese prime minister, Yoshihide Suga, has vowed to carry on his predecessor Shinzo Abe’s policies, which means seeing the deal through. And the Australian government has confirmed it still fully intends to sign this year.

"As RCEP economies develop and their middle classes grow, this deal will open up new doors for Australian businesses and investors across our region," Birmingham said. "With one in five Australian jobs trade-related, the more trade opportunities our businesses have, the more local jobs we can continue to create."

Still, Japan and Australia are hedging their bets.

In early September they agreed with India to launch a separate initiative aimed at supply chain "resilience" in the Indo-Pacific region — in other words, supply chains that are not dependent on China.

Japan was already pushing for similar cooperation with ASEAN countries and is expected to explore ways to combine the two objectives.

Japanese officials maintain that the move with Australia and India is not intended as a free trade agreement like RCEP. From India’s perspective, however, it is seen as a "plan B," according to Pankaj Jha, a professor of strategic affairs at the O.P. Jindal Global University.

Jha said the three-way partnership could also be called "a marriage of compulsions" since, like India, Japan and Australia have difficult relationships with Beijing.

"I do think it holds a possibility for an alternative way to bring India into these regional trade networks, given that RCEP [with India] is looking like a dead end," said Merriden Varrall, KPMG Australia’s director of geopolitics and tax.

"[Australia] has been pretty enthusiastic about China as a market opportunity and economic partner ... but we never know when something unprecedented might hit and we might need to have alternative and backup plans in place," she continued.

With India, Australia and Japan intent on pursuing their arrangement in parallel, the road looks relatively clear for an RCEP accord in November. Even if there are still a few points of contention, the 15 countries may sign an "agreement in principle," predicted a Southeast Asian official close to the talks.

Another extension "is not an option," the official said, "as there is a sense that if we don’t agree and sign the deal this time around, we may never get an agreement."

"We have negotiated for nearly a decade. We are exhausted and won’t have the energy for another year of talks."