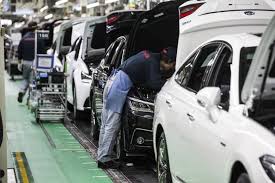 Japan and U.S. seek compromise on car and industrial-goods tariffs in working-level talks

WASHINGTON - Japan and the United States tried to find middle ground Thursday in working-level negotiations on lifting or cutting tariffs on vehicles and other industrial goods, as they sought to hammer out a bilateral trade agreement.

The talks come as the two sides prepare for the upcoming bilateral summit and minister-level trade talks at the Group of 20 summit in Osaka from June 28 to 29.

Working-level officials from the both sides, including representatives from Japan’s foreign and trade ministries, met in Washington to discuss what specific goods will be subject to tariff removal or reduction.

The Japanese negotiators went on the offensive, as almost no tariffs are levied on industrial goods imported to Japan. They asked the United States to swiftly eliminate its 2.5 percent tariffs on Japanese vehicles, as well as immediately lift tariffs on major auto parts such as tires and engines, which are heavily exported to the U.S., according to sources with knowledge of the matter.

Tariffs on consumer electronics, industrial machinery, chemical goods and textiles were also said to have been discussed at the meeting.

The administration of U.S. President Donald Trump, which is trying to revive America’s manufacturing industry, maintained a cautious attitude toward opening its market.

The United States promised in negotiations for the Trans-Pacific Partnership multilateral free trade agreement to abolish tariffs on vehicles in the 25th year of the TPP’s effectuation, and to immediately lift tariffs on more than 80 percent of auto parts, before Washington withdrew from the framework in early 2017.

With the U.S. presidential election approaching next year, U.S. negotiators do not appear likely to make concessions.

Tokyo and Washington agreed earlier this month to try to conclude their negotiations, launched in mid-April, at an early date after the House of Councilors election this summer, according to Japanese officials.

The two sides spent last week building the foundations for the negotiations by confirming the tariff rates and export volumes for all traded goods.