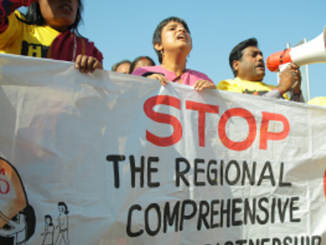 TOKYO, Nov. 28 (Xinhua) — Japan has been pushing the Trans-Pacific Partnership (TPP) trade agreement through the parliament, a desperate move to "save face" for Japanese Prime Minister Shinzo Abe but evokes criticism from the opposition camp.

Abe has told a special upper house committee that the ruling camp would stick to its plan to get the TPP ratified, despite the fact that U.S. President-elect Donald Trump had made it clear that he would pull the United States out of the free trade pact on the first day in office.

Japan’s ruling parties have decided to extend the current Diet session which is set to end on Nov. 30, partly aimed at ratifying the TPP pact as soon as possible and making Japan the first signatory to do it. Renho Murata, leader of the main opposition Democratic Party, however, blasted Abe’s decision to speedily ratify the TPP, stressing the deliberations should be put off to a regular session of the National Diet early next year.

Japan has hoped to change Trump’s stance on the TPP, especially after Abe’s meeting with the businessman-turned politican on Nov. 17, as the Japanese prime minister said later that he had a "candid" discussion with Trump on a number of issues including trade policies.

Trump, however, "dealt a blow to Abe’s foreign policy," according to local reports here, as he unveiled his first 100-day plan in office days later, which is topped by withdrawal from the TPP. The opposition parties have questioned the Diet deliberations to ratify the TPP, "as Trump would draw the U.S. out of the pact anyway."

Doubts and confusion also linger within the government. "The TPP was considered key to the (government’s) economic growth strategy. But now it becomes a troublesome burden," said Japan’s Kyodo News, quoting an anonymous government official.

"Abe hopes that if Japan and other countries show a strong will to start the TPP, it might change Trump’s opinion. But Abe’s efforts will be useless, because if Trump changes his opinion, it would mean that he breaks one of his most important pledges and he won’t do it," said Hiroshi Onishi, a professor at Keio University in Tokyo.

Martin Schulz, a senior research fellow in Fujitsu Research Institute, also believes "the TPP is dead." But Abe could not easily give up on the TPP because "it has always been a center piece of domestic reforms," he said.

Geng Xin, a political analyst, maintained that Abe "could not simply give up on the TPP because he has invested so much of his political resources in pushing it despite criticism within and outside his party." "Abe is in a dilemma," he said.

The focus of the Asia-Pacific is believed to be shifting to the Regional Comprehensive Economic Partnership (RCEP), which involves 10 members of the Association of Southeast Asian Nations (ASEAN) and its six major trading partners, including China and Japan, according to analysts.

Schulz believed that the RCEP will bring the region more benefits in terms of GDP gains in the coming decade. "The RCEP is a basically flexible trade agreement that tries to get some restrictions to trade out of the way. It could be implemented more easily," he said at a press briefing in Foreign Correspondents’ Club of Japan.

If the TPP fails, "the Japanese business community will go to the next step to seek other free trade agreements, and in this sense, the RCEP will become much important," said Onishi. The Free Trade Area of the Asia-Pacific (FTAAP) is also capturing wide attention. The FTAAP process was launched at the 2014 APEC Economic Leaders’ Meeting in Beijing with the endorsement of a roadmap.

During the APEC meeting in Peru earlier this month, China renewed its call for pushing forward the building of the FTAAP, as protectionism has dented global trade and economic integration.

"In the short term, negotiations on the RCEP and China-Japan-South Korea FTA will be prioritized. But FTAAP as a long-range objective for market integration of the Asia-Pacific region, is bound to be welcomed by the majority of countries in the region," said Jin Jianmin, senior fellow at Fujitsu Research Institute in Tokyo.