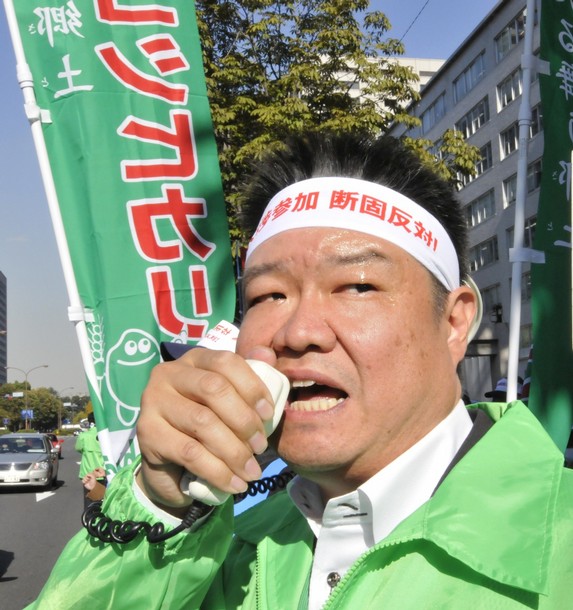 Farmer leader at the mobilisation in Tokyo on 10 November 2010 (Photo: Reuters)

TOKYO (Reuters) — Thousands of Japanese farmers rallied on Wednesday to demand their government steer clear of a U.S.-led free trade initiative which would open the heavily protected agricultural sector to fierce competition.

Japan has said it would start talks with other countries about the Trans-Pacific Partnership (TPP), but stopped short of pledging to join negotiations formally due to ruling party worries about fallout for politically powerful farmers.

"At this point in time, the Japanese government has no grand design or anything for the farm sector, and if TPP becomes a reality, there will be no more farming in Japan," Kiyoshi Ishii, chairman of an agricultural cooperative, told Reuters at the protest, where some 2,700 people gathered under blue skies.

Japanese business lobbies have urged Prime Minister Naoto Kan to make clear his intention to join TPP talks when leaders of the Asia-Pacific Economic Cooperation (APEC) gather in Yokohama, south of Tokyo, on Nov. 13-14 to discuss a vision of a broad regional free trade area that would link the fast-growing region.

Japanese companies are eager for Tokyo to join the pact, warning that their goods will lose competitiveness and jobs move overseas if the country is left out of the deal.

The TPP started as a trade pact between Singapore, New Zealand, Chile and Brunei, who have since been joined in talks by Australia, Peru, Vietnam, Malaysia, and the United States. It would in principle eliminate all tariffs within the zone.

There is no formal deadline for completing talks, but supporters hope for a deal by the time that Obama hosts the annual APEC leaders summit in Hawaii in November 2011.