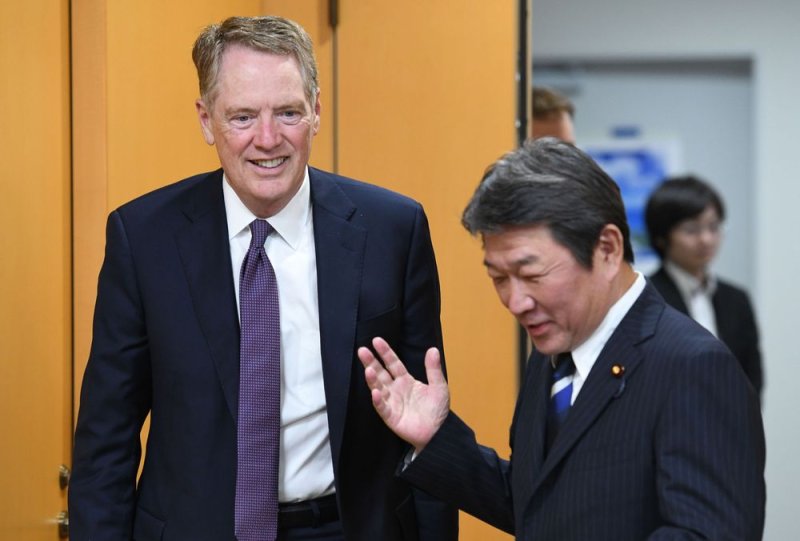 The Japanese and U.S. trade chiefs met Saturday in an attempt to advance talks on a bilateral deal ahead of Monday’s summit between Prime Minister Shinzo Abe and President Donald Trump, but the two sides still remain at odds, Economic revitalization chief Toshimitsu Motegi said.

In fact, no breakthrough was expected from the latest round of negotiations between Motegi, minister for economic and fiscal policy, and U.S. Trade Representative Robert Lighthizer, as the countries remain at odds over tariffs on agricultural and industrial products.

“So far, Japan and the U.S. haven’t gained common ground. We will work to bridge the gap,” Motegi told reporters after the talks. “It is unlikely any trade deal will be reached at the upcoming summit” between Abe and Trump scheduled for Monday.

The trade talks began hours after Trump’s arrival in the Japanese capital for a four-day state visit that will make him the first foreign leader to meet with Emperor Naruhito, who ascended the Chrysanthemum Throne on May 1.

At the outset of the talks, Motegi welcomed Lighthizer to his office and showed off an American football jersey from the Pittsburgh Steelers.

“This is a symbol of my desire to revitalize the Rust Belt,” said Motegi, who is in charge of dealing with trade issues with the United States, in an apparent gesture of his hope for a deal that will benefit both Japanese and U.S. businesses.

What Trump sees as a trade imbalance between the two allies is expected to top the agenda when he meets with Abe on Monday.

But in working-level discussions in Washington earlier this week, officials from both countries confirmed a significant gap between their positions still remains.

The United States is seeking greater access to the Japanese market for products such as beef, pork and wheat, as American farmers have become less competitive following the activation of the Trans-Pacific Partnership (TPP), a free trade agreement that includes Australia and New Zealand.

Japan has, meanwhile, pushed for the removal of tariffs on industrial products including automobiles, one of its biggest exports, as had been agreed before the United States withdrew from the TPP.