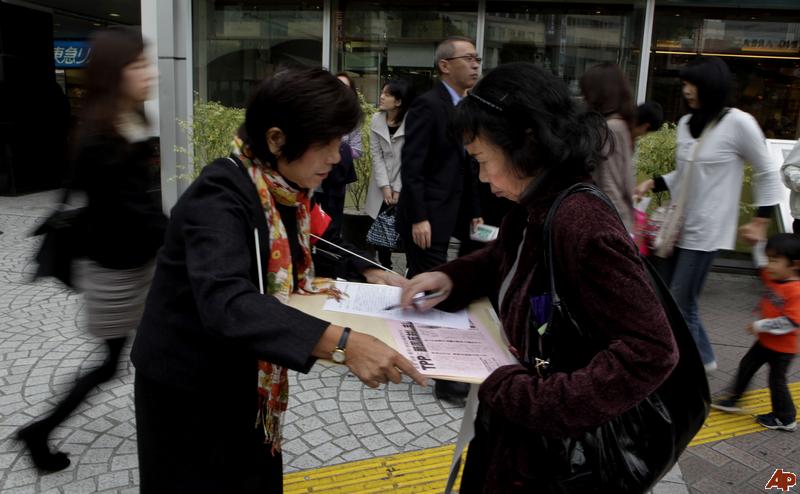 A Japanese farmers group activist collects signature from a passerby during a campaign against Japan joining the US-backed trans-Pacific Partnership, or TPP, free trade agreement in Yokohama, near Tokyo, Sunday, Nov. 14, 2010 near the venue of the APEC leaders’ summit. (AP Photo/Manish Swarup)

TOKYO (Kyodo) — Prime Minister Naoto Kan has been invited to a meeting Sunday of leaders from nine countries negotiating a U.S.-backed Pacific free trade agreement in his capacity as the chair of the weekend summit of the Asia-Pacific Economic Cooperation forum in Yokohama, Foreign Minister Seiji Maehara said Friday.

Kan is considering whether to take part in the gathering on the so-called Trans-Pacific Partnership, Maehara said. Japan decided earlier this week to start consultations with the TPP negotiating members, with an eye to deciding around next June on whether to join the talks.

In the TPP summit, the leaders are expected to formally welcome Malaysia as the group’s latest member, according to sources close to the negotiating countries.

The TPP originated in a free trade agreement among Brunei, Chile, New Zealand and Singapore, and negotiations are under way to expand it with participation by five other APEC countries — the United States, Australia, Vietnam, Malaysia and Peru.

Maehara told a press conference that if Kan takes part in the meeting, he is expected to "focus on hearing what the nine TPP negotiating countries envision as the future shape of the free trade arrangement."

Tokyo’s decision to launch consultations with the TPP members has stirred political controversy in Japan, as the nation’s heavily protected agricultural sector could be severely damaged by the pact, which in principle would require member countries to scrap all tariffs in 10 years.

Maehara also said he has suggested to other Cabinet ministers that the government launch a task force to draw up the nation’s strategic policy on promoting free trade agreements.

Koichiro Gemba, state minister for national policy, has said he will play a key role in coordinating each ministry’s positions on the matter, the foreign minister added.