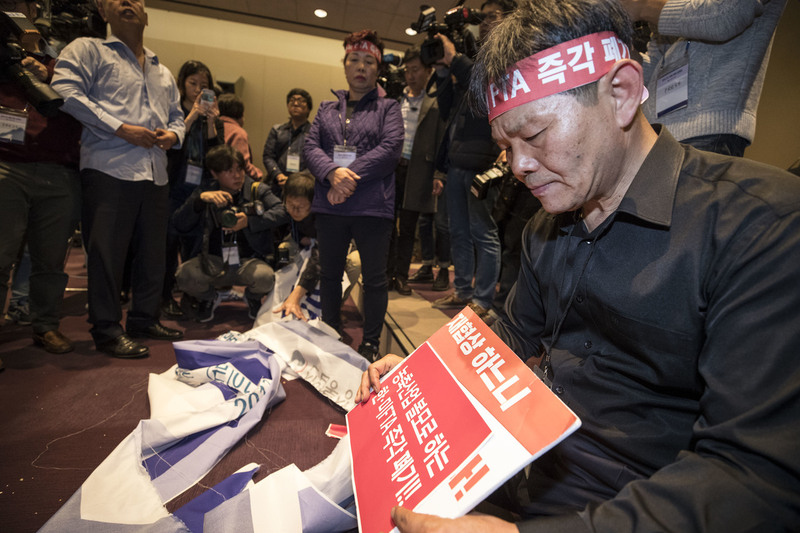 The government will protect sensitive industries such as agriculture in the upcoming negotiation with the United States over revision of the bilateral trade pact, which is expected to start within a month. It also unveiled industry policy direction of the new administration, which aims at creating 300,000 quality jobs by 2022.

The Ministry of Trade, Industry and Energy reported the negotiation plan with the United States over revision of the Korea-U.S. Free Trade Agreement (KORUS FTA) to the National Assembly, Monday.

The U.S. Donald Trump administration has been demanding revision of the five-year-old pact, following criticism by the U.S. President that it has led to U.S. trade deficit and job loss. Korea has argued that there should be analysis first to determine whether it really is the cause of the U.S. trade deficit, but it ended up accepting the demand following the U.S. pressure.

The country’s trade ministry went through domestic procedure required for beginning of the renegotiation, including an economic feasibility study, two rounds of public hearing, and reporting of the revision plan to the National Assembly.

During the public hearing, the agriculture industry had demanded scrapping KORUS FTA, but the trade ministry reported to the National Assembly that it would try not to further open the agriculture market.

The government noted that the United States is likely to demand scrap of non-tariff barriers in automobiles. It may also raise a number of issues in the services sector, including allowing U.S. financial companies to store customer data in servers overseas.

Expecting the talks to start within this year or early next year, the trade ministry said that it would also demand changes that Korea needs. The ministry plans to demand improvement of the Investor State Dispute Settlement (ISDS).

The ministry also reported "industry policy direction of the new administration" to the National assembly on the same day, which focuses on new industries, SMEs, and provinces as new growth engines. It noted that the country’s industry has been suffering imbalance, with most of the weight put on certain industries, conglomerates and metropolitan area. It noted that such imbalance ended up restricting innovative potential.

"By redesigning policies, the government will make the wheel of growth run again, making link between industry, job creation and income work," it noted in the report.

There has been criticism that good economic indices are not benefiting the working class since fruit has been limited to certain sectors. The ministry plans to create over 300,000 quality jobs by 2022 through innovation.

It picked future mobility society, hyper-connected society, and energy transition as key new industries. For mobility, it plans to introduce autonomous driving in highways by 2020. By 2022, the number of electric cars will be pulled up to 350,000.

It also plans to set up a 300 billion won fund jointly with the private sector to increase investment in the fourth industrial revolution.

To increase vitality of the country’s main industries, the ministry vowed to aggressively cope with import barriers in other countries, including taking the issue to WTO.