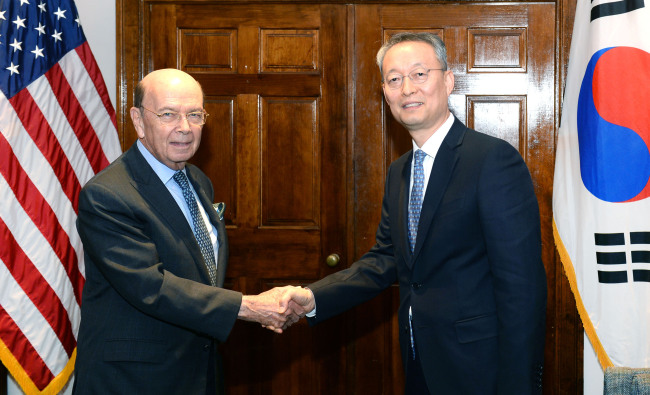 Korea, US made ’progress’ on details in revised FTA draft: minister

Washington: South Korea and the United States have made progress on the final details of a revised free trade agreement before a formal signing after they agreed in principle on major issues last month, Seoul’s commerce minister said Monday (local time).

Paik Un-gyu, minister of trade, industry and energy, made the remark during his weeklong visit to the US, where he met with senior American policymakers and business people, including Commerce Secretary Wilbur Ross and US Trade Representative Robert Lighthizer.

"South Korea and the US have made considerable progress in working out details for the KORUS FTA draft and agreed to push for the follow-up procedures without delay," Paik said in a meeting with correspondents in Washington, without going into details.

The two sides have yet to formally sign off on the amended trade pact, which also needs ratification by parliament before it takes effect.

His meeting came after Seoul and Washington last month reached an understanding on key issues to revise their six-year-old trade deal, which came against the backdrop of negotiations to get South Korea exempted from a 25 percent tariff on its steel exports to the US.

Yoo Myung-hee, the deputy minister for FTA negotiations, accompanied Paik’s trip to discuss the finer details of the trade deal with the US counterpart.

South Korea agreed to further open its auto market to the US and Washington said it would not impose steel tariffs on the country. Seoul was the third-largest exporter of steel to the US.

The agreement, however, imposes an annual import quota of 2.68 million tons, or 70 percent of the average of steel exports to the US over the last three years.

In meetings with American policymakers, Paik said he expressed concerns over the rising import restrictions by Washington, including safeguard duties on Korean washers and solar products as well as a series of anti-dumping tariffs on steel products.

He noted the US move to impose heavier duties on Korean products will go against the intended purpose of the trade deal between the two nations, and hamper Korean companies’ investment opportunities, which could negatively affect the American economy in the long term.

"I came to the US to discuss a positive agenda in the wake of eased uncertainties in the bilateral trades and to resolve the remaining negative issues, including import restrictions often levied by the US," Paik said.

The US is South Korea’s second-largest trading partner after China, with bilateral trade reaching $119.3 billion in 2017, according to government data.

South Korea’s trade surplus with the US fell from $25.8 billion in 2015 to $17.8 billion last year on sluggish sales of autos and steel and as the country imported more American beef and natural gas.