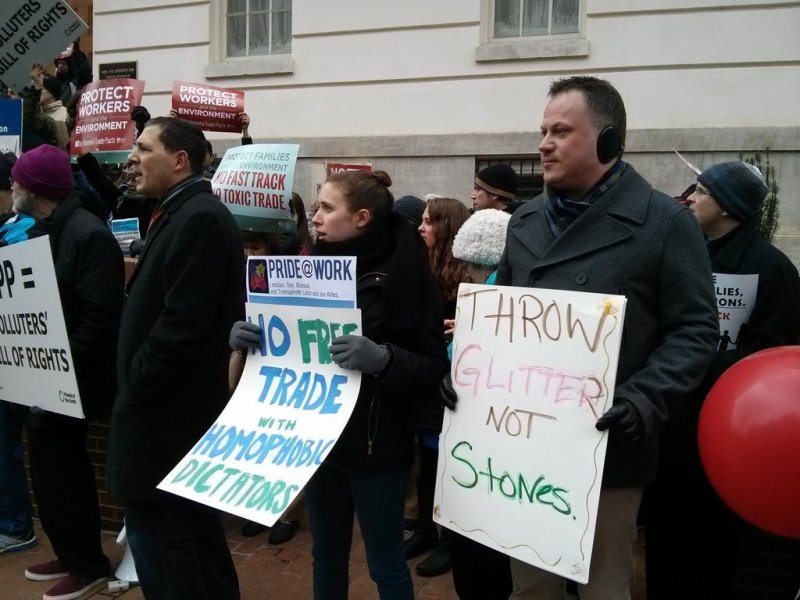 “These two countries are responsible for severe human rights abuses, including adopting penal codes permitting the imprisonment and physical harm of LGBT people,” the representatives write.

Five out LGBT members of Congress objected to the inclusion of two countries with anti-LGBT laws in a free trade deal that the Obama administration is currently negotiating and seeking to fast-track it for adoption.

In a letter sent to the president on Wednesday, the members asked why Malaysia and Brunei are part of a trade deal called the Trans-Pacific Partnership (TPP), which also includes several other nations in Asia and Latin America. The Obama administration has been seeking “fast-track” authority from Congress for the deal, which means whatever deal they negotiate is guaranteed an up-or-down vote.

Labor unions and other advocacy groups have long voiced concern that TPP could set too low a bar for signatories, but the pact only became a serious concern for LGBT-rights groups last spring after the sultan of Brunei imposed a version of sharia law that included a punishment of death by stoning for homosexuality along with other sexual offenses. The states of neighboring Malaysia also have criminal sharia codes, and the government is appealing a recent court ruling striking down their provision criminalizing transgender people. The courts of another potential TPP member, Singapore, have recently rejected challenges to its sodomy law, but it was not singled out by the members of congress who signed this letter.

The letter is signed by Reps. Mark Pocan (D-WI), David Cicilline (D-RI), Sean Patrick Maloney (D-NY), Kyrsten Sinema (D-AZ) and Mark Takano (D-CA), five of the six co-chairs of the Congressional LGBT Equality Caucus. The sixth caucus co-chair, Rep. Jared Polis, is the only out member of Congress who did not sign the letter. A Polis spokesman did not immediately respond to a message seeking comment about why he did not sign onto the letter.

The five representatives wrote that the negotiations were continuing with Brunei and Malaysia in the wake of the Obama administration’s announcement in December that it would kick the Gambia out of a trade pact for African nations, in part because of the country’s recent crackdown on LGBT rights.

“In light of the decision to end trade preferences for Gambia, we write today to ask for clarification on the inclusion of Brunei and Malaysia in the Trans-Pacific Partnership (TPP) negotiations,” the representatives write. “These two countries are responsible for severe human rights abuses, including adopting penal codes permitting the imprisonment and physical harm of LGBT people. It seems inconsistent for the United States to expand trade privileges to these two countries while taking action against Gambia.”

While President Barack Obama’s State Department has given unprecedented priority to LGBT rights a new priority — including creating a new position of special envoy for LGBT rights that is due to be announced later this month — it has been inconsistent in responding to anti-LGBT laws among its allies.

The Gambia was an unusual example of direct sanctions taken in response to anti-LGBT laws, and the U.S. also imposed targeted sanctions on Uganda before a sweeping anti-LGBT law enacted in early 2014 was struck down by its Constitutional Court in August. But several other nations that have anti-LGBT laws retain free trade status. These include Nigeria, which passed a law similar to Uganda’s in 2014, and dozens of allegedly LGBT people have been arrested since its enactment.