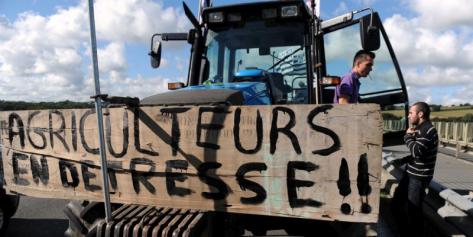 Making The Case For A French “Agricultural Carve Out”

Translated by Anoosha Boralessa (February 2016). Not reviewed by bilaterals.org or any other organization or individual

For a long time, the common agricultural policy and subsidies have allowed social and liberal logic to co-exist. Now, we need to reconstruct a law that takes into account the particularities of the agricultures that we want to preserve on the model of cultural exception.

If, for 50 years, Europe has really been interested in developing agriculture within its domain, through the Common Agricultural Policy (CAP), it is now focussed on developing agro-alimentary trade beyond its borders. Previously, the CAP provided genuine protection to peasant farmers confronted by big markets. Now confronted by these same markets, Europe offers them no more than the market solution!

After choosing European food sovereignty, Europe relegates the job of providing it to chiefly an external issue. One finds agricultural products throughout the world and international trade ensures that we do not to lack anything. With industry and trade, Europe therefore chooses this ever-increasing liberalization of international markets. Since it cannot hope to achieve this through the WTO as it is blocked by the rule of unanimity, it follows the US by negotiating handfuls of bilateral free trade treaties with developed countries or regions but also (albeit under different conditions), with African countries, Caribbean and Pacific states, after twisting their arms to sign them.

This policy will weaken family agriculture, peasant agriculture and, probably, agro-ecology that, France, for its part, says it wants to develop. Because if our farmers want to survive this new European CAP, they will have to move to large-scale, industrialized and financialized agriculture.

At the same time, this new European policy tends to abolish distortions of competition more with non-European countries than with European member states. Free trade treaties aim at standardizing all laws on production and manufacturing on the basis of the lowest common denominator and not only the famous «chlorinated chicken». These are all the disparities that negotiators flush out discreetly, as if transparency and social challenge were illnesses that we needed to guard European citizens against.

On the other hand, distortions in competition in the Union persist. If the European market is still “single”, environment, social, tax laws are not. But gradually, European countries that grant the most protection will end up lowering the level of [protection] of their laws so that their farmers stay competitive. This is just what may happen if French pork breeders ask the state to cut back the environmental laws applicable to them and social burdens. One understands their position, even if it is not a sustainable solution. Europe has done even more in 2015 by transferring to States the decision to prohibit GMO products on their territories. That will create new intra-community disparities which, given the more or less tight deadline, will force European states to accept GMOs if they do not want to lose markets.

The effects of these European policies are beefed up by the fact that the agro-food industry is shared by a social logic for agriculture, triggered by rural law and former CAPs, and a liberal, competitive logic on the part of industry and distribution, that activates commercial law. At present, the CAP and subsidies were plugging the gaps between these two logics. But with the reduction of subsidies and the decoupling of production, these two logics come increasingly into head-on confrontation, which is exactly what the crises of milk, pork and others have come to show.

The peasants that are not ready, find themselves in big markets where there is a considerable imbalance between almost non-existent legal arms in rural law and those otherwise powerful weapons of business law. In 2006, certainly, one granted to farmers some legal tools extracted from commercial law. But these are those that the small trader had, when it wanted to defend itself faced with the rise of large retailers. One knows what the result was.

From then on, what to do to regulate crises in the agricultural world? Do we need to look for a model in the farming world of agro-ecology, non-conventional farming and the speeches heard during COP 21, or rather in financialized farms piloted by investors that manage an ever-increasing number of cattle, cows, pigs and broods?

The truth is, we need a number of farmers and different agricultures.

Farmers and breeders need us to invent for them concurrently «a rural farming right of quality agriculture” and «an agricultural law of added value». They need the power to group together without risking negative comment of «an agreement» from Brussels or Paris. They need to see their interests respected in contracts that they conclude with industry and distribution; they need the law governing public markets to be more openly favourable to local quality products; they need local innovative agricultural policies (installation, collective restoration…), of a local and national business law conceived with as much care as international trade law. They need consumer protection that allows «consumer-eaters» to be well informed, to be able to act as consumer citizens (origins, technologies…).

And as for industrial farmers that prefer the international markets, we need to think outside rural law, about the means for competition and for facilitative company law.

Essentially, the coexistence of diversified agricultures requires us to radically revise the law that applies to them on two principles. The first relates to researchers in social sciences. It is no longer necessary to be bound by mono-disciplinarity where economists make econometrics and jurists, positive law, both indiscriminately, at the service of the system that generates crises. We need strong measures to encourage trans-disciplinarity. At the same time, within the world of research, we need some jurists that consider the law with the world in mind and others that look upon the world with the law in mind. The first are aces of a legal musical theory, and there is no shortage of them. But we also need those who explore the music of the law with other disciplines, instruments and in different genres, and even with non-conventional methods. This will be a mini revolution in the world of legal researchers, who lag far behind in this regard, at all stages, from the basic up to European research institutions. This is absolutely necessary.

The second condition is to conceptualize the law of agriculture on the basis of a type of «agricultural exception» in the uniform landscape of free trade, but on the model of «a cultural carve out». If our screens enable us to see the world of international cinema, notably American, they leave just as much space for French cinema and films made by cultural minorities. How to reflect on the law so that they can co-exist and so that different industrial, family, technological, peasant, exporting, local agricultures can flourish? There are legal means. The whole world would be a winner from the farm to the table. And it is high time to set about it! If agriculture offers us Star Wars without Rives et la Famille Bélier, we will end up with the Titanic.