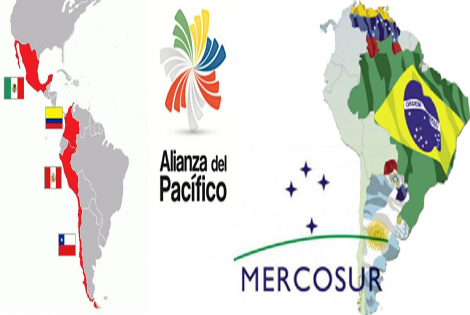 Foreign Ministers from both blocs will meet November in Chile to discuss a Free Trade Agreement by 2016.

Foreign Ministers from the Southern Common Market (Mercosur) and the Pacific Alliance county’s will meet in Santiago, Chile in November in order to strengthen ties between the two blocs, according to a statement this Tuesday by Paraguay’s Foreign Minister Eladio Loizaga.

“Mercosur must look outwards, even when trade among Mercosur members has grown significantly, it favors some countries more than others. This is the case of Paraguay which has considerable trade deficit with Argentina.” said Loizaga on announcing the meeting.

In 2013, Argentina was the third largest exporter to Paraguay, of which manufactured industrial products comprised 61 percent of total goods.

Paraguay is eager to expand its list of trading partners particularly in the wake of declining profit margins from agricultural exports to traditional markets due to heavy market competition.

The country’s Agricultural Production Union estimates that sales from soy exports for 2014-2015 will fall by nearly US$1 billion compared to the previous year.

Loizaga’s announcement marks a series of efforts to strengthen relations between the two regional trade organizations.

Since then, ministerial discussions have taken place between Pacific Alliance and Mercosur representatives to address strategies to deepen trade ties. ​

In August, Brazilian Minister of Foreign Trade, Industry and Development Mauro Borges announced that his country seeks to accelerate talks between the Mercosur countries and the members of the Pacific Alliance group, in order to reach a free trade agreement by 2016.