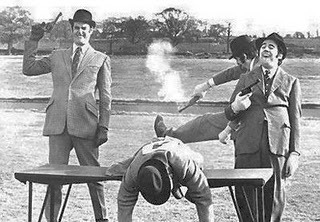 Perhaps we can all quietly sign a pact to forego comparing a free trade deal with the US to the quest for the Holy Grail. This ‘free trade as Holy Grail’ notion is a cliché that will not die, because the media loves it so much. This morning, RNZ’s Katherine Ryan was calling a free trade pact with the US ‘the Holy Grail.’ Late last month, when Mike Moore was appointed as our new ambassador to the US the Dominion Post used the same cliché twice in successive sentences

“Despite the best efforts of politicians and diplomats, the holy grail of New Zealand diplomacy with the US still eludes this country. That holy grail is a free trade deal improving exporters’ access to the world’s richest economy…”

Last November, TV3’s reported on the APEC conference in Singapore under the heading ” Key Meets Obama To Discuss ‘Holy Grail’ Of FTAs,” and claimed in its report that the Holy Grail metaphor had originated with Key himself. However, the pre-history of this cliché goes back well beyond Key though. As long ago as September 2008, Jane Young on Pundit was re-assuring readers that “ All is not doom and gloom in the pursuit of this holy grail of a trade deal..”

Of course, one of the many virtues of the Holy Grail was its ability to produce free meat and drink, non stop on demand.. You’d think from the cheerleading way that the mainstream media has embraced the cliché, that a US free trade deal was similarly miraculous – a shimmering vision almost within our grasp, and likely to shower goodness down on this lucky country, without much in the way of further effort on our part. That’s not how free trade works. Its not even how the Holy Grail story pans out, either – doesn’t anyone remember the death toll among the goodly knights who set out after it ?

Taking those drawbacks one, by one… Even if he wanted to – and he shows no sign of such a desire – Barack Obama is simply not able to steer through Congress a trade deal that would be meaningful to New Zealand exporters, and certainly not a bilateral trade deal worth anything like “the billions and billions” of dollars that Key was burbling about in Singapore. There is a new and strong mood of protectionism in Washington – and any deal that would further jeopardize American jobs or markets would be dead on arrival in Congress.

Last year, Tim Watkin on Pundit offered a thorough analysis of US press reaction to the free trade stance with the Pacific region that Obama briefly enunciated at APEC, and it should have been sobering news for exporters. We’re simply not on the US radar for a bilateral deal. Even within any multilateral arrangement, the chance of meaningful concessions to our exporters on agriculture is a pipe dream.

Early in March, the next round of talks on the multilateral trans-Pacific free trade grouping touted at the last APEC meeting – the so called “P4” group of Chile, Brunei, Singapore and New Zealand – is scheduled to begin. Last month in the Watertown (NY) Daily Times, this report signals the furious domestic opposition Obama would face for any worthwhile deal with New Zealand:

The last time the United States and New Zealand opened up their agricultural markets to each other, New Zealand’s dairy farmers won greater access to a coveted piece of the U.S. dairy industry. The United States settled for cat food.

Now the Obama administration is proposing another effort to tear down trade barriers with New Zealand and other trans-Pacific countries, and stiff opposition is taking shape from dairy farmers’ allies in Congress.

What could we expect to have to give up in order to get a free trade deal – assuming for a moment that this was even possible ? Last year, CAFCA and others spelled out the concessions New Zealand that would be expected to make:

Remove any remaining “restrictions” on foreign investment, as the US regards NZ’s (purely token) oversight regime as “discriminating” against US transnational corporations

push up the price of medicines by potentially hundreds of millions of dollars a year by attacking Pharmac;

weaken our controls on food imports, where they might carry diseases.

Nor, as the same report makes clear, has fighting alongside the US in Iraq or in Afghanistan guaranteed other gullible allies any brownie points on the trade front:

New Zealanders…would be wise to reflect on the rueful words of Sir Christopher Meyer, Britain’s Ambassador to the US in the runup to the US/UK invasion of Iraq. Speaking to the current public inquiry into Britain’s part in that invasion and war: Meyer expressed frustration that Britain was unable to gain much diplomatic leverage from its position as the US’ chief ally.

Britain failed to persuade the US to liberalise trans-Atlantic air travel and, almost on the day when British commandoes joined the fighting in Afghanistan, the US imposed tariffs on imports of specialised British steel” (Press, 28/11/09). If this is the way that the US treats its “chief ally” when it comes to protecting its own trade and economic interests, how do you think…New Zeaand will get on?

All of which begs the basic question of whether the free trade deals recently negotiated between nations in the region do subsequently benefit business to anything like the degree that the starry eyed advocates of free trade would claim. In that respect, it is worth repeating the evidence from the Australian Industry Group reports on the impact of free trade on businesses across the Tasman. The great majority have seen little or no benefit from the range of FTA deals signed in the past five years:

In January, the Australian Industry Group reported that so far, 69 per cent of businesses it surveyed had seen no benefits from the Australian free trade deal with Singapore.

Time then perhaps to retire the entire magic box of Holy Grail/poisoned chalice analogies. ‘Free’ trade, like lunch, is never free – and the media shouldn’t be volunteering to tout free trade as a panacea for our export effort. As a small nation, we can only win access to other markets via trade deals by surrendering further elements of our own trading position. Therefore, benefits to (a few) exporters stand to do equivalent damage to (many) New Zealand consumers. That’s why we need to know beforehand what the cost /benefit equation is likely to be, before enlisting in any empty boosterism of ‘free’ trade deals.