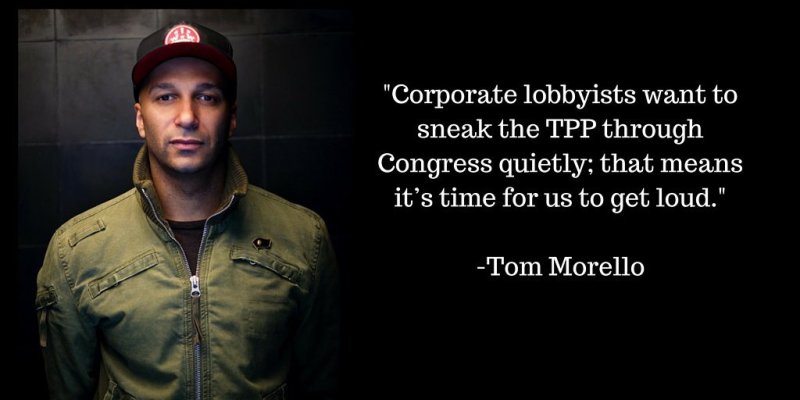 Musicians, actors set to campaign against the Pacific trade deal

A group of entertainers is hitting the road this weekend to kick off a campaign to build opposition against a Pacific trade agreement, adding some star power to an otherwise wonky effort.

The Rock Against the TPP tour, which is a series of free concerts starting Saturday in Denver, is being headlined by legendary guitarist and political activist Tom Morello of "Rage Against the Machine" fame in an effort to educate the public about the Trans-Pacific Partnership (TPP) deal.

Other musicians lending their talents to the tour include hip-hop artist Talib Kweli, Anti-Flag frontman Justin Sane and Jonny 5 of the Denver-based hip-hop group Flobot.

The shows, which are so far scheduled for San Diego; Portland, Ore.; and Seattle will be used to discuss the TPP and relay concerns to Congress.

Evangeline said she became active in the TPP effort because she couldn’t bear to tell her two young children that she looked the other way.

"I don’t want them to wake up one day and wonder how we got here and they ask me "where were you?," she told reporters on a call.

"I can actually raise my voice about it and that’s what I’m trying to do," she said.

She said the TPP deal is about "concentrating power in the hands of the world’s largest corporations at our expense" and it must be stopped.

Ryan Harvey, who co-owns and co-founded Firebrand Records with Morello last year, said the tour is a way to include people in the conversation who feel left out of the process of crafting a trade agreement.

"I believe that culture and especially music can open doorways into people’s minds and hearts," Harvey said.

Even the venues are on the intimate side — between 700 and 2,000 seats — aimed at putting concertgoers into the middle of the music and the activism action.

The tour is backed by left-leaning groups and include labor unions such as the Communications Workers of America as well as environmental groups like Sierra Club and Friends of the Earth.

Overall, the concerts are part of their larger effort to educate the U.S. public and convince them to oppose the sweeping agreement and urge Congress to do the same.

Stan Greenberg, head of polling firm Greenberg Quinlan Rosner Research, told reporters that this is the “right moment to be doing" the events, especially with a possible TPP vote in Congress later this year.

“In the end, what this is about is accountability,” Greenberg said, and “whether elected officials will say yes or no to a deal shaped by corporations in private.”

Even with President Obama and his administration pushing for a vote before he leaves office, the deal faces a tough uphill battle on Capitol Hill.

Democrat Hillary Clinton and Republican nominee Donald Trump have been hammering away at the TPP and the overall U.S. trade agenda, making it much more difficult to for congressional leaders to consider the expansive agreement.

Lori Wallach, head of Public Citizen’s Global Trade Watch, said the "tour is part of numerous efforts to make sure the public understands what this is really about."

Wallach, whose group has been in the forefront of trying to stop the TPP, said the effort to stop the 12-nation deal must go forward because Congress could still pass the agreement before the president leaves office.

She figures that if the president thinks the House can get the 218 votes needed to pass the TPP that he will take a shot.

"He will go for it if he has the votes," Wallach said.

She added: "I wouldn’t want to gamble either way on this one. It’s that tight."