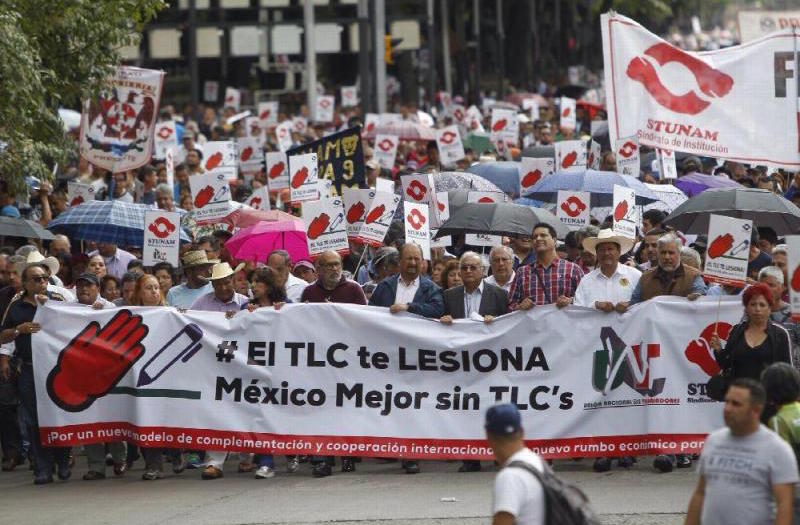 Nearly 9,000 people to march through the streets of Mexico City to their Foreign Ministry with hundreds of banners and signs that read "NAFTA Injures You"

NAFTA renegotiation: Will working people continue to get shafted?

With Lori Wallach, director of Public Citizens Global Trade Watch, and Gisela Perez, lawyer and journalist who works at NGO Derechos Digitales and is a spokesperson of the coalition "Mexico Against NAFTA", composed of more than 30 civil society organizations and trade unions.

The trade policies that replace NAFTA cannot be allowed to put the interests of multinational corporations first, as the renegotiation of NAFTA under a Trump administration teeming with corporate interests is positioned to do. We need an internationalist approach to trade that lifts up labor rights, environmental standards, and human rights for people in all of the nations involved in the agreement, and provides good jobs for workers in the U.S. Trump wants to allow corporations to pit U.S. workers against other working communities in a global race to the bottom.

To coincide with the first day of NAFTA renegotiations, Mexican civil society organizations, including the largest independent trade unions, small farmer and other civic and human rights organizations, mobilized nearly 9,000 people to march through the streets of Mexico City to their Foreign Ministry with hundreds of banners and signs that read "NAFTA Injures You" Mexico is better without Free Trade Agreements. Contrary to President Trumps claims that Mexico has been the big winner under NAFTA, the dozens of Mexican civil society organizations that organized the march assert that the current NAFTA model has been a failure for the majority of Mexicans and that they reject any deepening of that model through NAFTA re-negotiations. They blasted the secrecy of the negotiating process and delivered a list of demands to the Mexican government.

Lori Wallach says: A new NAFTA deal that we can support is a deal that not only stops NAFTAs ongoing damage, but that creates American jobs and raises wages. Unless NAFTAs investor privileges that promote job offshoring are eliminated and that strong, enforceable labor and environmental standards and tighter rules of origin are added, a new deal will not be better for working people, much less deliver on Trumps promises to bring down the NAFTA trade deficit or create more American manufacturing jobs. NAFTA must be renegotiated to stop its ongoing damage. But depending on how the administration conducts these talks, NAFTA could get worse for working people in all three NAFTA countries.