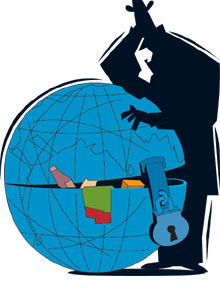 Geographical indications (GI) are signs used on goods — frequently food, wine, or spirits — that have a specific geographical origin and are said to possess qualities, reputation or characteristics that are essentially attributable to that place of origin. Given the quality associated with the product, proponents of GI protection argue that it is needed to avoid consumer confusion as well as to protect legitimate producers.

Europe has the most extensive geographical indication protections in the world. These include Protected Designation of Origin (PDO), which covers agricultural products produced, processed and prepared in a given geographical area using recognized know-how; Protected Geographical Indication (PGI), which covers agricultural products linked to the geographical area; and Traditional Speciality Guaranteed (TSG), which highlights traditional character, either in the composition or means of production.   The net effect of the European system is that hundreds of items enjoy special legal protection.

What does this have to do with the TPP?

As part of the Canada-EU Trade Agreement, Canada agreed to expand protection for nearly 150 European geographical indications. However, CETA has still not been signed due to controversy over the investor-state dispute resolution provisions in the agreement, which have attracted significant European opposition. Canada and the EU are working on a compromise, but the failure to sign CETA before TPP raises the possibility of problems with the Canadian provisions on geographical indications. Moreover, several side letters indicate that at best a confusing, patchwork approach has been created.

Section E of the TPP’s intellectual property chapter establishes the legal protections for geographical indications. The U.S. is opposed to GI protection (it argues that trademarks can achieve the same thing) and wanted to use the TPP to help block European demands for GI protection.

The most relevant provision for Canada involves the procedure for existing international agreements. Canadian negotiators clearly wanted to include CETA within the scope of the provision even though the deal is not concluded. Canada therefore likely inserted the following footnote:

"For the purpose of this Article, an agreement "agreed in principle" means an agreement involving another government, government entity or international organization in respect of which a political understanding has been reached and the negotiated outcomes of the agreement have been publically announced."

That sounds like CETA and reports indicate that Canadian officials believe this covers it. That would place the new European GIs under the procedures for existing international agreements. Article 18.36(2) states:

"In respect of international agreements referred to in paragraph 6 that permit the protection or recognition of a new geographical indication, a Party shall

(a) apply paragraph 1(b) [which involves Internet postings of details on potential new GIs]; (b) provide an opportunity for interested persons to comment regarding the protection or recognition of the new geographical indication for a reasonable period of time before such a term is protected or recognised; and (c) inform the other Parties of the opportunity to comment, no later than the commencement of the period for comment."

These provisions are designed to provide greater transparency with GIs, but does not include a clear opposition mechanism. However, there is another footnote that is creating some confusion:

The obligations of paragraph 1 include the possibility of opposition and cancellation of a GI. Some reports have speculated that Canada might have to follow this latter approach, though the word "may" suggests that either option is valid.

If that was not sufficiently complex, Canada also signed four side letters on GIs. The letters with Peru and Chile simply confirm that existing GI approach found in the Peru and Chile free trade agreements with Canada. The letter with Japan confirms the existence of GIs protected in each country and opens the door to new ones in the future.

Most notably, the letter with Mexico identifies three Mexican GIs that are eligible for protection, but Canada reserves the right to use the TPP’s cancellation provisions. This letter may explain the confusing footnote that allows for two different compliance approaches.

By now, the legal complexity of this provision means that most readers will have stopped reading. Yet the Trouble with the TPP is that a trade agreement that is supposed to make things easier for business actually succeeds in making it more difficult. These rules will have a real-world impact on Canada and Canadian businesses, which will be left to grapple with numerous different legal approaches and commitments to GIs arising from domestic rules, the various trade agreements, and side letters with one-third of TPP members.