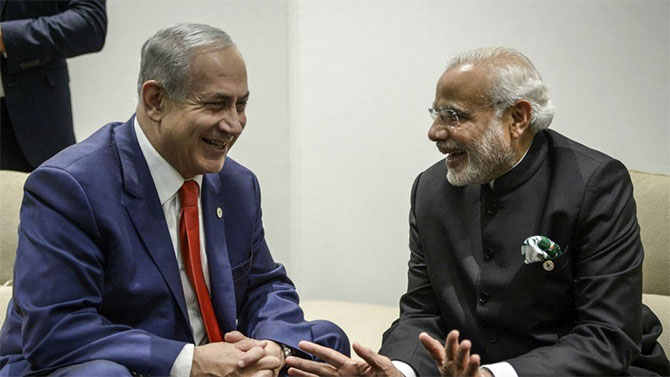 New Delhi: Israeli Prime Minister Benjamin Netanyahu on Tuesday urged Prime Minister Narendra Modi to expedite talks on trade and investment in an effort to take bilateral ties to the next level.

Netanyahu, who is on a six-day visit to India, is accompanied by a 130-member business delegation from sectors such as defence, cyber security and agriculture.

Immediately after his ceremonial reception at the Rashtrapati Bhavan, Netanyahu spoke of “prosperity, peace and progress” in bilateral ties.

“Israel is a fountainhead of innovation and a global force in technology. We are seeking more cooperation in defence so that our people are always safe,” Netanyahu said.

He also discussed the need for having a Free Trade Agreement (FTA) as well as a Bilateral Investment Treaty (BIT) with India at the “earliest” in an effort to forge greater business-to-business ties, sources told BusinessLine.

“Thriving two-way trade and investment is an integral part of our vision for a strong partnership. Prime Minister Netanyahu and I agreed on the need to do more in this direction,” said Modi.

According to sources, the Israeli side sought greater access to the Indian market, especially in the farm sector, pharmaceuticals and automobiles segments. Israel is keen to boost two-way trade from around $5 billion now to $10 billion. “The two Prime Ministers agreed that renewed efforts are required to realise the full potential for bilateral trade and investment, and took note of the next round of discussions between the two sides to be held in February in Israel,” stated a joint statement by the External Affairs Ministry.

Speaking to reporters later in the day, Vijay Gokhale, Secretary (External Relations), Ministry of External Affairs (MEA), said a delegation from the Ministry of Commerce and Industry will be visiting Jerusalem to have a formal round of talks next month. Since the talks for an FTA were launched in 2007, nine rounds of formal talks have taken place.

However, while India is not keen on an FTA, it has agreed to negotiate on a bilateral investment treaty for greater investment inflows from Israel to India.

The second round of talks on the BIT is expected to take place soon.

On the $500-million deal on ‘Spike’ anti-tank guided missiles, cancelled by India recently, sources said both sides have agreed to go in for a government-to-government deal.

Both the Prime Ministers also directed their Defence Ministries to hold discussions in 2018 with the active involvement of the public and private sectors in order to create the basis for viable, sustainable and long-term cooperation in defence.

Israeli defence companies such as Israel Weapon Industries and Rafael Advanced Systems already have a presence in India.