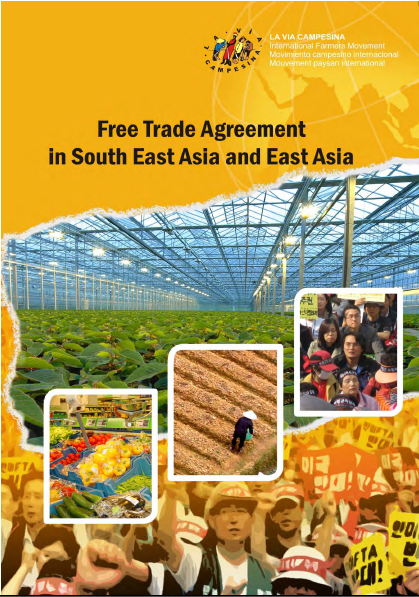 Korean Women Peasant Association (KWPA) and Korean Peasant League (KPL) hosted the meeting. The objective of the meeting was to analyze the current financial crisis and its impact on the Asian population. Various experiences of Free Trade Agreements (FTAs), struggle against FTAs and finding strategies for unified struggle against FTAs were shared.

The struggle against FTAs/EPAs is the struggle against neoliberalism. Another name for Free Trade Agreement is the Economic Partnership Agreement (EPA). The same thing but with different name with the aim of expanding capitalism. Current bilateral or regional FTAs/EPAs have had a negative impact in all sectors. A FTA is not only a bilateral agree- ment but also structured tools to change the regime with the aim of taking power in these countries. The power is not only dominant in the economic sector but also supports the role of TNC’s so they to do whatever they want wherever they want. Beside that, the other aim is geopolitical, which forces each country to go to war with each other.

This book is a compilation of various papers that were presented at the strategic meeting in South Korea. La Via Campesina hopes that this booklet can be useful and provide more information about FTAs/EPAs and inspire all of you who fight for the FTA in your country.

We would like to thank all of you who contributed to the publication of this booklet.

Food crisis and Landgrabbing, contextualizing the struggle against FTA in Asia, GRAIN

Free Trade agreement and its impact on small peasants in Indonesia, SPI Indonesia

Experience of and future plans for struggle against FTAs

Strengthening the effort of workers and consumers against the WTO and FTAs, Shokkenren, Japan