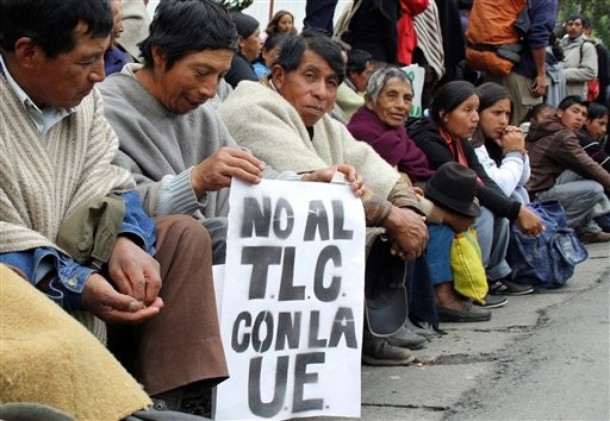 More than 200 non-governmental organizations sign a manifesto calling on the European Union (E.U.) to strike down its free trade agreement (FTA) with Colombia, EFE reported Wednesday.

The FTA between the E.U. and Colombia, as well as Peru, was signed on May 19, 2010, and aims to boost bilateral trading between the European bloc and the Andean nations.

The proposed agreement, which still needs to be ratified by the European Parliament, has faced criticism over the state of human rights in Colombia, as well as protests from members of the dairy industry who were concerned about the implications of competing with the heavily-subsidized European market.

These concerns remain at the forefront of the objections to the FTA, with a spokesman for the Social Continental Alliance (ASC) labelling the partnership "asymmetric."

"The treaty inhibits the ability of states to promote policies of economic and social development," Enrique Daza said during the presentation of the manifesto at the European Parliament’s headquarters in Brussels, Belgium.

He singled out Colombia as being particularly at risk, warning of the "destruction" of the rural economy and danger to some 200,000 families that currently rely on the production of milk to survive.

"The peoples of Latin America are at a disadvantage in the treaty," he concluded.

The Spanish MEP Raul Romeva, meanwhile, voiced his disregard for the human rights clause included in the treaty, which "to date has shown itself to be totally useless."

He lamented the inability of the parliament to introduce amendments to the agreements, as they can only vote for or against its ratification, while further criticizing the nature of the negotiations which were, in his view, carried out "with haste" and for "electoral interests."

However, the head of the European Trade Union Confederation, Juan Moreno, expressed his belief that the treaty will nevertheless be supported by the European Parliament, with the leading conservative Popular Party already having announced its support.

As yet, no date has been finalized for the vote but the European Commission hopes that the agreements will enter into force by mid-2012.