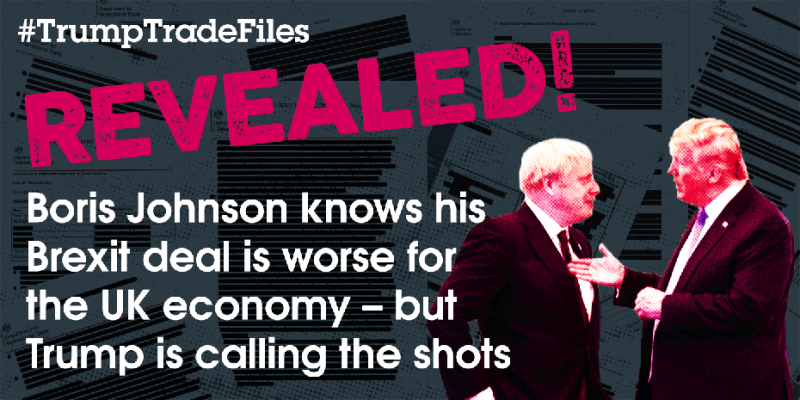 The Independent | 29 November 2019 NHS drug prices, chlorine-washed chicken and secretive courts: What do US-UK trade documents tell us about life after Brexit?

Hundreds of pages of leaked documents detailing behind-closed-doors talks between US and UK officials have stoked fears about the true price of a post-Brexit trade deal with Trump’s America.

The Labour Party has focused on the NHS being “up for sale”, but what else do the documents reveal?

Among the dossier is proof that Donald Trump’s administration is pushing for longer patents and “market pricing” for its pharmaceuticals, which could push up drug prices for the NHS.

During a series of private meetings between mid-2017 and July this year the US has also repeatedly pressed the UK to accept American-style food safety standards.

Detailed talks have been held on provisions that would allow American firms to sue the UK government in opaque international arbitration proceedings.

The government has not yet agreed to any of this but it raises a host of questions about how open ministers have been about the contents of talks.

1. Is Donald Trump pushing for a no-deal Brexit?

The documents suggest that the Trump administration favours a no-deal Brexit. “There would be all to play for in a no-deal situation,” UK officials were told by their US counterparts.

By contrast, American negotiators described Theresa May’s Chequers proposal for Brexit as a “worst-case scenario” because it would not allow sufficient changes ro British food standards to give US agriculture firms free access to UK markets.

Since these statements were made, Boris Johnson has secured his own Brexit deal which is similar in many respects to the previous one but does not envisage a close “economic partnership” with the EU as Ms May’s did.

2. What exactly is ‘on the table’ in trade deal talks?

US negotiators are working on the explicit principle that every aspect of trade should be assumed to be up for negotiation unless it has specifically been ruled out, the documents show.

“[This] approach makes total market access the baseline assumption of the trade negotiations and requires countries to identify exclusions, not the other way around.”

There is no specific mention of the NHS being “off the table”, but equally there is no mention of a sell-off to Big Pharma.

3 Will the NHS have to pay more for drugs?

The two sides have discussed the NHS, as well as higher drug prices, longer patents and freer market access for American pharmaceutical industries as part of the trade talks. All of these have the potential to significantly increase costs for the NHS.

US officials said the issue of drug prices “plays out domestically”.

“The US said there is a lot of conversation on drug prices and looking at what other countries pay and this is causing angst.

“There are worries that the US is not getting a good deal in pharmaceutical industries.”

The statements echo those of Donald Trump, who has repeatedly stated that Americans are being ripped off and that he wants other countries to pay more for drugs.

The UK is a key country on this issue because the NHS is one of the largest purchasers of pharmaceuticals in the world.

Prices that the NHS will pay for a treatment are set by the National Institute of Health and Care Excellence (Nice), an independent body that weighs up each drug, medical device or surgery’s costs and benefits. Its judgments are used by the NHS to decide on purchases and its job has been getting more difficult in recent years as prices of individual treatments have been rising.

A number of other countries also use Nice guidelines as a reference point, meaning that US pharmaceutical companies could receive a large financial boost if the US can get the UK to sideline the body and pay higher prices.

The documents show that the US wants prices to be “market-derived” or “competitive” which would likely mean significantly higher than in Nice guidelines.

Drug prices in America have soared since protections were removed in the 1990s. Studies have found that popular medicines are three times more expensive in the US than the UK. For individual drugs the differences can be vast.

The US has also demanded longer patent protection. While in most industries, a “free market” means more competition and potentially lower prices, in pharmaceuticals it often equates to greater protection of a company’s monopoly on a drug by enforcing patents.

This could add significantly to the NHS drug bill or mean that certain drugs are simply not available to patients.

“The impact of some patent issues raised on NHS access to generic drugs (i.e. cheaper drugs) will be a key consideration going forward,” UK officials wrote.

“We have reached a point (for patents in pharmaceuticals/ health) where beyond specific policy details in niche areas, we are awaiting the clearance to negotiate and exchange text to really take significant further steps."

4. Will Britain have to accept lower food and environmental standards?

US negotiators “repeatedly emphasised” in the talks that they want the UK to obtain “regulatory autonomy” from the EU. In other words: ditch EU standards and protections in favour of American ones.

“The US suggested this would be beneficial for the UK not only in terms of trade, but in relation to productivity, competitiveness and driving innovation,” officials wrote in November 2017.

American negotiators believe there is a “philosophical difference” between the US and EU approaches on the broader issue: “The EU aims to reduce chemicals on food; the US aims to reduce pathogens.”

They concede that “these two systems are not easily compatible” suggesting that one side will have to give way.

The documents do not indicate which way the negotiations are leaning, but we know that the UK has significantly less negotiating power than the US. Liam Fox says chlorine-washed chickens are fine but claims UK won’t reduce environmental standards

The US also offered to help persuade the British public of the benefits, or – in trade speak – “share their public lines on chlorine-washed chicken to help inform the media narrative around the issue”.

UK representatives said they were “in listening mode” and agreed to “explore this through engagement”, hinting that they may be attempting to change public opinion on the issue.

This meeting took place four months after then-environment secretary Michael Gove said the UK would not “compromise” on or “dilute” its animal welfare standards for a US trade deal.

The key question for Boris Johnson is: are lower food safety standards a “red line” in negotiations, as Michael Gove has said? Or does he see it as unimportant?

One option might be to label American imports which are made to lower standards than British ones, but the US is against this.

“The US view the introduction of warning labels as harmful rather than as a step to public health,” notes from a November 2017 meeting states.

“[American trade representatives] are concerned that labelling food with high sugar content (as has been done with tobacco) is not particularly useful in changing consumer behaviour.”

Studies from a number of countries indicate that sugar labelling has been useful in tackling the obesity and diabetes epidemics.

The carcinogenic weedkiller glyphosate was singled out by US officials as an example of where they believe EU safeguards are a hindrance.

Some EU member states pushed for a ban on glyphosate over safety concerns, which held up the process of renewing its licence which was eventually completed in 2017.

“Glyphosate was used as an example; following relevant Committee approval in the EU, the media speculation resulted in the European Parliament over-ruling the Committee. The US does not believe that this secondary process is helpful, since it can overrule the verified science and risk analyses.”

Last year, a US court awarded a man $289m in damages after ruling that a glyphosate-based weedkiller called Roundup caused his terminal cancer. Monsanto, which makes the weedkiller, faces more than 13,000 similar cases.

A UK representative "inquired about the possibility of including reference to climate change in a future UK-US trade agreement".

But the US "responded emphatically that climate change is the most political (sensitive) question for the US, stating it is a ’lightning rod issue’".

Donald Trump has pulled the US out of the Paris Climate Agreement and gutted American environmental regulations.

Climate change has become one of the few topics that we know is effectively banned from US-UK trade talks.

The two sides have discussed US requests for a system that would allow American companies to sue the UK government in international proceedings outside UK courts certain circumstances where they feel they have been unfairly treated.

The process, known as investor-state dispute settlement (ISDS) has been highly controversial. It is mentioned 74 times in the trade talk documents.

“ISDS could lead to US firms suing the UK for regulations designed to meet our climate targets or protect the NHS, and so it absolutely must not be included in a US trade deal.”

Proceedings are often opaque and experts have questioned why ISDS is needed in a US-UK trade deal when American companies can already use British courts to take legal action.

"ISDS could lead to US firms suing the UK for regulations designed to meet our climate targets or protect the NHS, and so it absolutely must not be included in a US trade deal. These leaked documents, which explicitly mention ISDS 74 times in total, are therefore deeply worrying,“ said Lawrence.

The US has publicly stated that it wants a "transparent" arrangement for resolving disputes between its companies and the UK government but James Harrison, associate professor of law at Warwick University, cautioned that transparency can mean a range of things.

“There is no evidence that implementing ISDS increases investment but it is a massive boon to large companies who can sue governments," he said. "So it is of no benefit to the countries involved.

“In the UK, where we have a strong rule of law and there is no indication of bias against foreign companies, you do not need this international mechanism."

source: The Independent
leaks UK US
Subscribe to bilaterals.org weekly