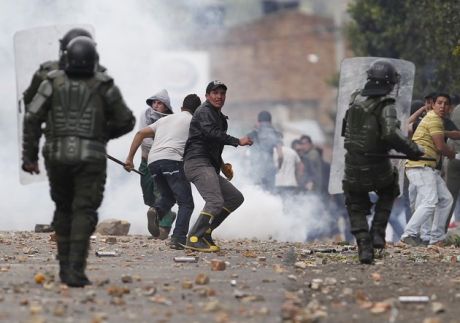 On the National Strike and Wave of Popular Disobedience in Colombia

The Colombian anarchist Grupo Libertario Vía Libre wrote and published the following article in late August, in Spanish. This translation includes some contextual information (in brackets) for English-language readers who are not familiar with all the people and organizations mentioned. [Castellano]

The administration of Colombian President Juan Manuel Santos, now into its third year, is on its heels due to a growing crisis of legitimacy. Shaken by a storm of social unrest, the result of several crises that have impacted among others the agricultural, transportation, health and education sectors, GDP is slowing down and the first symptoms of a national economic crisis are visible. Large parts of the campesino, mining, artisanal and transportation worker sectors, impacted by a prolonged agricultural and industrial depression that originated through the liberalization of the Colombian economy over the last twenty years organized a Paro Nacional, a National Strike. These workers also felt the impact of the unequal and exclusive recovery in the prices of raw materials that has taken place in a few marginal countries during the current capitalist crisis, as well as the shock effect brought on by the first year of implementation of the U.S. Free Trade Agreement, to which the Santos administration has added 20 other new free trade agreements. The National Strike was observed in rural areas and with fragmented expressions sent Colombia from mid- to late August into a vortex of social disobedience, which is continuing and strengthening the increasing class resistance that we have witnessed since 2008, as well as the escalating cycle of protests that took place through 2011-2012.

The Santos administration has led a political project of one sector of the national bourgeoisie that wants to convert the nation into a regional power, committed to U.S. imperialism but with the autonomy to open itself to Asia. This project seeks to modernize a backwards State and to deepen capitalist penetration in Colombia. Santos’ administration has initiated a Peace Process with the left-wing FARC-EP guerilla organization and a limited policy to liberalize some outdated oligarchic structures, especially in the rural areas, that opened up a wave of expectation and hope among the population. Yet due to the administration’s own characteristics this hope cannot be fulfilled, a fact that has awakened the ire of millions.

All this is happening as elections in which the administration seeks to secure its reelection are on the horizon; the political left pushed into political moderation, fragmented in the electoral arena, is in urgent need of increasing its social presence now that it faces the threat of losing its institutional participation.

Santos is also developing a complex peace process that has put into action the only formula his administration considers efficient, which is closed negotiations, outside the country while the armed conflict continues. This process has led to an increase in the conflict, not in its military stalemate [State forces cannot defeat the leftist insurgents] but in the social dimension that gives us a crucial understanding of the pressure and participation of those on the lower rungs of society, so that an authoritative and militarist State will concede and guarantee peace.

The sectors involved in this struggle have become central figures in the nation’s politics and a center of attention for almost three weeks. Calling into question all of the current administration’s policies and the neoliberal model with a few obscure but important anti-capitalist elements, these sectors are demanding immediate subsidies and investment plans linked to strategic demands like the defense of territory, and the campesino and artisanal economies.

The Strike has not only overwhelmed the government, and security forces but also the [political] left and social organizations. This Strike has been extensive and wide open, with varied and unequal participation. It has been intermittent but forceful and has united four large waves of protest:

As the second coffee-growers’ strike was brought under control, the transportation sector divided, efforts to render the Strike invisible, the regional dialog strategy fell apart in the most conflicted regions, and in the midst of the breakdown of nationwide negotiations due to government tactics the Santos administration, which has used forceful but unequal repressive measures throughout this movement leaving eight unarmed protesters dead, now faces a situation not seen in over a generation: a national strike called by the popular movement that actually impacts this country, that had witnessed the silent and dramatic failures of the 2006 and 2008 strikes organized by the Central Unitaria de Trabajadores, and the 2012 strike organized by the COMOSOCOL [COMOSOCOL was created to coordinate Colombian social movements and organizations]. The current rural-based protest movement has surrounded the cities, blocking and paralyzing provincial roads and reducing the delivery of food.

The similarities with the 14 September 1977 National Strike are worth mentioning. It was the largest mass protest of Colombia’s recent history, and took place during the presidency of Liberal Alfonso López Michelsen, whose administration Santos ironically commemorated in recent days. Sadly Clara López, president of the Polo Democratico Alternativo, and Piedad Córdoba, leader of Marcha Patriótica, two political movements opposed to the Santos administration, also commemorated the López administration.

The comparison with the 1977 strike and its demands that our organization has successfully positioned within the current social struggles, allows us to analyze the similarities of both contexts and the frustrated hopes for reform, the social crisis and the initial economic crisis, as well as the important differences that characterize urban involvement and the enormous labor union presence that shaped the 1970s experience.

This current movement also shares similarities with powerful regional strikes that took place during the second half of the 1980s. The current movement is not that large and aggressive yet it is more coordinated at the national level and with a broader or more diverse makeup. We think that the current movement continues our popular tradition of local and national civic strikes as an expression of current/historical discontent.

The outlook of this movement is complex yet optimistic: on the one hand the strength of the mobilization - even though worn out - continues; more civic sectors have joined the protest and the nationwide impact continues to grow. This is exemplified by the smooth coordination led by the Mesa de Interlocucion y Acuerdo, or MIA. The MIA is made up of unorganized independent sectors and the leadership of FENSUAGRO, which is a member of Marcha Patriótica and Dignidad Campesina [potato, rice, onion and coffee growers] influenced by the MOIR [FENSUAGRO is the Federación Nacional Sindical Unitaria Agropecuaria; MOIR is the Movimiento Obrero Indpendiente y Revolucionario; Marcha Patriótica is a left-leaning social and political movement]. At the same time a national strike of health workers organized under the ANTHOC; a national 24-hour oil sector strike that will not halt production called by the USO; a mobilization of public school teachers by the FECODE, the most important union federation in Colombia, that has called a second time for a National Strike - this time for September 10, and a call for a national strike of university students in October by the MANE in defense of the Alternative Law for Higher Education [ANTHOC is the national union of public sector health workers; USO is the oil workers’ Union Sindical Obrear; FECODE is the public sector teachers union; MANE is the Mesa Amplia Nacional Estudiantil. The student-led MANE brought down a Santos-proposed education reform with ample social and political support last year].

Yet the government has taken a hardline suspending dialogs, militarizing the regions in conflict, criminalizing organizations involved in the conflict like Marcha Patriótica and starting judicial processes against protest leaders like Hubert Ballesteros. The popular movement, in the meantime, shows a serious limitation because it does not have the organic participation of urban workers, in neighborhoods and workplaces, a sector that is highly unorganized but decisive due to its demographic and productive importance to push forward some important change at the national level.

It is clear that despite the fact that former right-wing president Alvaro Uribe’s movement has lost its control over this popular movement due to its neoliberal and antimilitarist positions, it can still be used by the ultraconservative Uribe to capitalize on the discontent generated by the lack of communication, the lack of food supplies, the cells of ill-directed violence, as well as the fear of renewed class warfare and possible social change.

In the current situation organized anarchists in Bogota have participated according to our limited but growing strength in some of the actions of agitation, solidarity and protest carried out in the city and the province of Cundinamarca, mainly in the marches that took place on August 19 in the city of Facatativá and as students and popular educators on August 29 in the National Day of Struggle.

For our group, the lessons of the movement are clear: we should promote a broad campaign of solidarity with all people in struggle working for conscious and programmatic unity of the struggles in the rural and urban sectors preparing for the National Strike (Paro Nacional), promoting the strength of popular organizations and their ability to fight in those areas in which anger explodes and extend the protests to new territories.

In that sense we must defend the legitimacy of the Strike, especially the blockage of major roads as the main form of struggle and popular political violence as a tool of self-defense, as we seek the participation of local communities, projecting the organization and the collective control of direct action decided upon by the base to contain their negative effects by that same base, while at the same time we help diversify the repertoire of actions for the eventual response.

We believe we must work to change the Strike into a laboratory of our own power, generating and struggling for our own needs and aspirations for social change, increasing direct action and organizing among urban workers and launching our link with the more dynamic rural sectors, fighting against the Santos administration and the neoliberal model, as we at the same time deepen and open new spaces for the libertarian battle against Capitalism and State control.