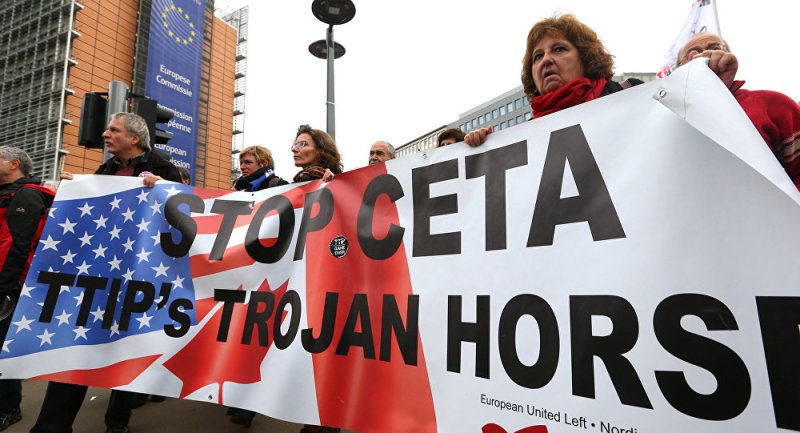 Opinion 2/15 and the future of mixity and ISDS

Opinion 2/15 on the EU’s powers to conclude the EU-Singapore Free Trade Agreement (EUSFTA) delivered Tuesday received considerable attention from the press. This comes as no surprise as the Court’s Opinion has consequences for future EU trade deals such as CETA and potentially a future UK-EU FTA. Despite the fact that the ECJ concluded that the agreement should be concluded jointly with the Member States, the Financial Times jubilantly claimed victory for the European Union, belittling Wallonia in the process. This victory claim calls for three initial comments as there are aspects of the Opinion that might merit a different conclusion.

Did the Court just discard the theory of facultative mixity?

In its Opinion, the Court found that the EU had exclusive competence over most of the EUSFTA and shared competence over non-direct investment and Investor-State Dispute Settlement (ISDS). Despite the fact that the EU thus enjoyed competence to conclude the EUSFTA, the ECJ came to the conclusion that the agreement required the involvement of the Member States (see paras. 244 and 292).

Unfortunately the Court did not explain why Member States needed to be involved in an area of shared competence resulting in the tentative conclusion that the theory of facultative mixity has been rejected or at least affected by the Court. This theory, developed by Judge Allan Rosas, holds that there are two forms of mixity: obligatory mixity and facultative mixity. Obligatory mixity arises where a mixed agreement is required because the EU has exclusive competence over one area of an agreement, but no competence at all over another area. The EU therefore naturally needs the Member States to fill in the remaining areas of competence. Facultative mixity, on the other hand, arises when the agreement falls within shared competence of the EU and the Member States. There is then a political choice as to who exercises this competence, the EU or the Member States. To my knowledge, the choice is almost always made to resort to a mixed agreement, not least to ensure involvement of national parliaments in the ratification process.

If the Court did reject the theory of facultative mixity – and it by all means it has the looks of it – this would have significant consequences for the EU’s ability to conclude international agreements in areas of shared competence. Even if the EU and the Member States elect mixity almost every single time, there is still an element of political discretion involved. By contrast, it seems now that in all areas of shared competence, such as environmental protection, Member States would as a matter of law need to be involved in the ratification process. It appears therefore that even if the EU has shared competence, the EU is prevented from acting in at least some areas of an agreement. This is anything but a victory for EU powers vis-à-vis that of the Member States.

Here the Commission suffered a major defeat, in particular in relation to ISDS. The ECJ rightly dispatched with the rather outlandish argument that since Treaty provisions on free movement of capital would be affected by the EUSFTA, the EU enjoyed exclusive competence pursuant article 3 (2) TFEU (see paras. 229-238). Perhaps even more significantly, the Court found that ISDS was shared competence because it ‘removes disputes from the jurisdiction of the courts of the Member States’ (para. 292).

For current EU trade policy the consequences of the judgment are that future FTAs will remain mixed, requiring ratification of the Member States. It is perhaps worth recalling here that Wallonia’s contention with current FTA’s first and foremost have to do with investment and ISDS/ICS, and thus the confirmation of it’s legal right to be involved in this area of policy is a clear victory for Walloon prime minister and professor Paul Magnette. This pinpoints to the opposite of the claims of the FT. If indeed ISDS is removed from EU trade agreements that would also be a victory for the Walloons.

Lastly, the Court dispatched with the idea that if it would not rule on compatibility of ISDS with the Treaties, we can all assume that the Court thinks that ISDS is compatible with the Treaties. As I wrote earlier, chief CETA negotiator Mauro Pettriccione in a hearing before the European Parliament has stated (at 12:30:30) “if the Court is examining the substance of the request in Singapore who is competent regarding ISDS, the Court must be thinking ISDS is compatible with the EU Treaty otherwise it would have stopped the proceeding, and have said this is incompatible with the Treaty, we are not going to examine the competence, because nobody is competent to do this.” In at least one event I attended, I have heard an MEP repeat this assertion in defence of voting against a request for an Opinion on the compatibility of the Investment Court System (ICS) in CETA with the Treaties.

Obviously these statements are questionable as the Commission itself had limited the scope of the request to only the question of competence, not compatibility. Nonetheless, the Court similar to the Advocate General felt compelled to explicitly state this in the Opinion. It held ‘this opinion of the Court relates only to the nature of the competence of the European Union to sign and conclude the envisaged agreement. It is entirely without prejudice to the question whether the content of the agreement’s provisions is compatible with EU law.’ (para. 30) The Court, moreover, repeated this point later on in paras. 290-293, notably pointing out that ISDS affects the powers of the courts of the Member States.

This is an important statement of the Court and one that is very relevant for the question of compatibility (see here for a more elaborate discussion). The courts of the Member States are, together with the CJEU, the ‘guardians’ of the EU legal order who play a key role in the uniform application and interpretation of EU law through the preliminary reference procedure, the ‘keystone’ of the EU’s judicial system. It is no surprise therefore that so many judges associations, including the European Association of Judges and the German Association of Judges, have objected to the Investment Court System.

By acknowledging competence of the Member States in the area of ISDS and by making this strong statements on how ISDS affects the powers of European judges, the Opinion clears the path for a Belgian or Slovenian request for an Opinion on the compatibility of ICS with the Treaties, something that the Commission has been keen to avoid in the past years. In the case of Belgium, it now seems that a request for an Opinion is imminent.