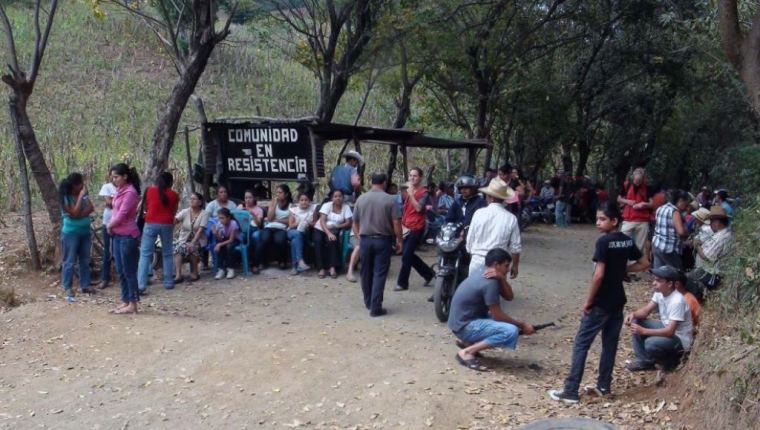 Today, a letter signed by 227 Guatemalan and international networks and organizations was delivered to Guatemalan authorities and the U.S. Embassy in Guatemala. The letter denounces the US$300 million-dollar suit that the U.S. mining company Kappes, Cassiday & Associates (KCA) is bringing against the Central American country as a shameless attempt to undermine the will of the communities affected by its project and the decision of the courts. The company filed the suit in December 2018 at the International Centre for Settlement of Investment Disputes (ICSID) for alleged violations of the Central America–Dominican Republic Free Trade Agreement (CAFTA-DR).

Community members representing the peaceful resistance of ‘La Puya’ presented the letter to government authorities from the Ministry of Energy and Mining, the Ministry of Natural Resources and the Environment and the Ministry of the Economy during a congressional hearing on the ICSID process.

In the letter, organizations argue that the suit “represents a further attack on Guatemala’s judicial system.” They point to mounting pressure on the Constitutional Court from President Jimmy Morales over to the Court’s rulings on mining projects, as well as efforts by the executive branch to put the brakes on corruption investigations involving high level officials.

“We fear that the company is using this suit to pressure Guatemalan authorities into an agreement that would remove the multiple obstacles blocking the restart of the Progreso VII Derivada gold mine, including legal processes and social opposition. This would be yet another example of the ‘chilling effect’ that agreements like CAFTA-DR have on public and regulatory policies,” remarked Manuel Pérez-Rocha of the Institute for Policy Studies in Washington D.C.

The Guatemalan Supreme Court of Justice suspended the mine in 2016 for lack of prior consultation with Indigenous communities in the municipalities of San Pedro Ayampuc and San José de Golfo, north of Guatemala City. The suspension remains in effect, pending a final decision from the Constitutional Court.

Even after the Supreme Court ordered the suspension, the company continued to operate the mine. As a result, owner Daniel Kappes and the company’s in-country legal representative are under criminal investigation in Guatemala for illegal exploitation of natural resources. The company was also found guilty of operating without a construction license.

“KCA’s project is plagued with illegalities, and yet its owners feel entitled to bring a suit against Guatemala. This sort of blackmail to try to undermine Court decisions, as well as the peaceful resistance and rights of local communities, should not be allowed. Unfortunately, we have already seen such arbitration used for similar reasons in the past,” stated Carla García Zendejas from the Center for International Environmental Law (CIEL).

In March of this year, the peaceful resistance ‘La Puya’ celebrated the seventh anniversary of sustaining the 24 hours a day, 7 days a week encampment outside the mine entrance. Social opposition to the project arose from the potential impacts of the mine on water, public health, and the environment in this dry region of the country. The resistance has faced acts of intimidation, threats and criminalization, as well as an assassination attempt against one member in June 2012. Since KCA filed its suit, concerns have resurged over militarization of the area, as well as renewed threats and harassment against members of the resistance. The Guatemalan government has labeled the peaceful resistance ‘La Puya’ as anti-development and accused local communities of being responsible for the costly suit.

“KCA’s suit is an example of present-day corporate colonialism. Through violence along with legal and political tactics, an elite foreign interest is profiting at the expense of people and planet,” stated Laura Martin, Executive Director of the Progressive Leadership Alliance of Nevada (PLAN).

Members of PLAN also delivered the letter to the company’s office in Reno on Wednesday.

In solidarity with ‘La Puya’ and the residents of San Pedro Ayampuc and San José de Golfo, the 227 organizations call on KCA and the Guatemalan government to abstain from intimidating Constitutional Court judges, that judicial independence be respected, and that decisions be made in accordance with the law. In the same vein, they demand that KCA drop its suit.

See a full copy of the letter and list of signatories here.