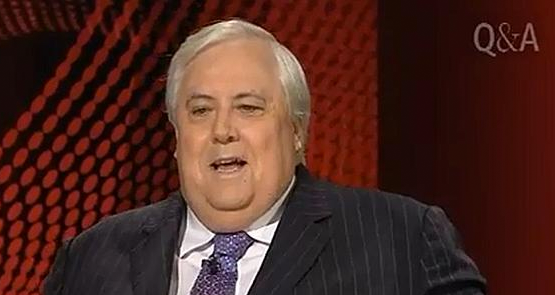 The Abbott government was close to negotiating a free trade agreement with China. That is, until Clive Palmer got involved.

The Abbott government was close to negotiating a free trade agreement with China. That is, until Clive Palmer got involved.

Clive Palmer’s anti-Chinese government comments last week — they are “bastards” and “mongrels” — could not have come at a worse time for Prime Minister Tony Abbott and Trade Minister Andrew Robb.

Chinese President Xi Jinping is preparing to bring more than 400 people — the largest business and political delegation from the country ever to set foot in Australia — to our shores to coincide with the G20 summit in Brisbane. At the same time the Australian government desperately wants to finalise a free trade agreement with China that has been in discussions for nine years.

The entourage will include potential investors for every sector of Australia’s fraying economy, and Crikey has also learned that Xi will be bringing at least five leaders of the six major Chinese east coast provinces, which have “sister state” relationships with Australian states. These are the southern economic powerhouse of Guangdong, China’s most populous province with 104 million people, and sister state to New South Wales; Zhejiang, sister state to Western Australia and home to the famous entrepreneur breeding ground city Wenzhou; Shanghai (one of China’s four city-state municipalities), which is “sistered” with Queensland; Shandong (South Australia); Jiangsu (Victoria); and Fujian (Tasmania).

More sophisticated people in Beijing dismiss Palmer’s spray — once a key China supporter (after all, the country has made him rich), he is in the midst of a grubby legal battle with China’s state-run CITIC Pacific over its disastrous purchase of the rights to mine the $10 billion Sino Iron project. It’s not insignificant that Palmer sold them a pup (excuse the pun) although they bought it with eyes wide shut.

“Palmer’s raising the subject of Chinese ownership of Australian assets … will make it more difficult to sell an FTA that gives more away to China.”

But not everyone was amused by his comments. The Communist Party’s Murdoch-inspired tabloid The Global Times called him a “prancing provocateur” and said: “China must be aware that Palmer’s rampant rascality serves as a symbol that Australian society has an unfriendly attitude toward China.”

Chinese social media was also set alight by his comments.

The fracas also means Abbott and Robb now face fresh pressure on an already fraught, self-imposed deadline to get a free trade agreement signed with China before the end of the year. And Palmer’s raising the subject of Chinese ownership of Australian assets — a significant concern within the National Party — will make it more difficult to sell an FTA that gives more away to China.

Anti-Chinese ownership sentiment will make all it all the more difficult for Abbott and Robb to hand China the key part of the deal China has been demanding: the same $1 billion floor on investments, currently applied to investments from the United States, South Korea and Japan, that would be reviewed by the Foreign Investment Review Board.

Crikey understands that this is still on the table for private companies — but here lies the rub. The biggest Chinese investors in Australia are state-owned enterprises — and only two years ago, then-opposition leader Tony Abbott announced, in Beijing, no less, that he was not in favor of allowing SOEs to own majority shares in any Australian companies. Since then, Treasurer Joe Hockey has allowed State Grid Corp of China, the world’s biggest state utility, to buy 19% of electricity supplier SP AusNet and 60% of energy infrastructure company SPI Australia. That’s some backflip.

There is a standard clause in FIRB rules that any state-owned company investment, irrespective of its size, needs review. But the Chinese are pushing hard to have at least a minimum amount introduced for SOEs as well. Palmer may well have given them more ammunition.

Following his visit to Australia, Xi and much of his delegation will head to New Zealand. Like many European countries, it has done a much better job of branding itself for the Chinese market and pulling in investment across a range of sectors.