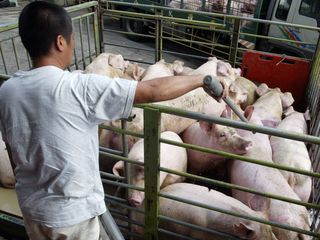 Pig farmers plan protest against US beef on March 8

TAIPEI—Local pig farmers will take to the streets of Taipei on March 8 to protest against any move to lift the bans on imports of U.S. beef that contain residues of feed additive ractopamine, a representative of the pig farmers association said Thursday.

The protest will be staged two days after a visit to Taiwan by Francisco Sanchez, U.S. under-secretary of commerce for international trade, said Pan Lien-chou, an executive in the R.O.C. Swine Association.

Some 20,000 people are expected to participate in the demonstration in front of the Legislative Yuan and Council of Agriculture (COA) to voice their opposition against imports of U.S. beef that contain ractopamine, Pan said.

The farmers will not protest at the American Institute in Taiwan (AIT) since the de facto U.S. embassy does not allow such activities near its compound, Pan said.

Sanchez will be in Taiwan March 4-6 to push U.S. President Barack Obama’s National Export Initiative, which aims to double U.S. exports by the end of 2014, according to the AIT.

The pig-farmers protest was rescheduled from March 5 following a Feb. 20 meeting between Agriculture Minister Chen Bao-ji and 13 of the association members, amid controversy over the ban on ractopamine, a leanness-enhancing drug.

The government, under pressure from the U.S., has been considering whether to relax its ban on ractopamine and allow the sale of meat that contains traces of the drug.

Ractopamine is allowed in livestock feed in 20-plus countries around the world, including the U.S., but it is banned in Taiwan, China, the European Union and more than 100 other countries.

Chen said later Thursday that the government has not yet made a decision on the beef issue.

The COA will definitely protect the pig farming industry, but the industry also needs to stabilize pork prices, which have been falling. Chen said.

“It is more important to stay at home and take care of the pigs,” Chen advised pig farmers, noting that protests are costly.

Meanwhile, Premier Sean Chen reiterated Thursday that the government will not make any decision on the beef issue as long the public has major concerns.

“We are still discussing it with the experts and have no set stance,” the premier said at a workshop held by the ruling Kuomintang (KMT).

Until we can determine whether ractopamine is harmful to human health, we will continue to ban U.S. beef containing residues of the drug, he said.

The U.S. beef dispute has been a central issue in the re-opening of talks under the Trade and Investment Framework Agreement (TIFA) between Taiwan and the U.S.

The government should not approve U.S. beef imports as the issue was highly controversial and was directly related to the health of Taiwan’s people, said opposition Democratic Progressing Party (DPP) Legislator Lee Ying-yuan.

If President Ma Ying-jeou decided to ignore the people’s health, every citizen would fight to the end, said Lee at a press conference held to protest against a possible resumption of U.S. beef imports.

He showed photos of hounds that had become sick after being fed the feed additive ractopamine, the active ingredient of Paylean that U.S. cattle farmers are allowed to use.

Lee said that the European Union had asked member countries to “ban beta-agonists like Paylean because of harmful health effects.”

Moreover, in an experiment conducted on a farm owned by Lin He-jen, the chairman of the Republic of China Swine Association’s Kaohsiung office, 50 pigs that were fed ractopamine had a higher death rate compared with the other pigs on the compound, according to Lee.

“The government should not poison people’s food,” Lee said.

Lee was accompanied by other DPP legislators including Mark Chen, Chen Ou-po and Pasuya Yao, and Chan Chang-Chuan, a professor at National Taiwan University.

The U.S. beef dispute has become a central issue regarding the re-opening of talks under the Trade and Investment Framework Agreement between Taiwan and the U.S.