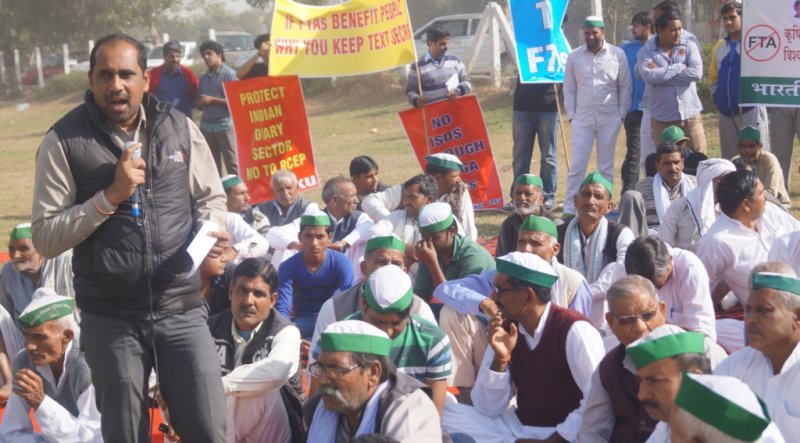 The RCEP is a complex North South Free Trade Agreement (FTA) that India is negotiating with the 10 member ASEAN block plus Japan, China, South Korea, Australia and New Zealand.

Vijoo Krishnan of All India Kisan Sabha (AIKS) said that the India ASEAN FTA has seriously affected South Indian farmers. Now the RCEP with 15 other countries, will affect farmers across India. Countries like Australia, New Zealand want to export their dairy products to India. If the negotiations go through, it will have a disastrous impact. We demand that the government stop its engagement on RCEP.

Yudhvir Singh, Convener of Coordination Committee of Farmers Movement said, ’farmers’ organisations in India oppose the RCEP FTA. We are concerned that RCEP will increase imports of agricultural products into India. We are also worried that farmers’ access to affordable medicines may also be affected. The Government of India has not consulted farmers’ organisations before going ahead with RCEP negotiations. This kind of secrecy is in the 21st century is not acceptable’.

Afsar Jafri from the NGO Focus on the Global South said that, the NDA government is merely following the free trade path laid out by the UPA regime. He argued that the Commerce Minister had said that the Government will conduct a review of all FTAs. ’But it has not come out with any socio economic impact assessment of FTAs. All negotiations are kept secret, away from public scrutiny. Every decision taken at these secret negotiations will affect peoples’ lives. We want transparency in trade negotiations, he added.