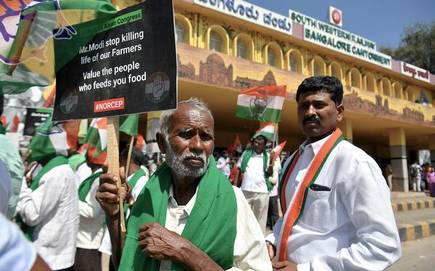 It will deepen the ASEAN FTA impact Fast-paced moves are on to conclude the talks on the Regional Comprehensive Economic Partnership (RCEP) and seal an agreement. There have been noises of protest from the Congress party which was the chief architect of the India-ASEAN Free Trade Agreement (FTA) and numerous other FTAs in the pipeline. Protests even from within the Sangh Parivar have not deterred the Modi government from pursuing the mega FTA.

The disastrous impact of the Indo-Sri Lanka FTA and ASEAN FTA on Indian farmers especially in the plantation sector —tea and coffee, spices, rubber, coconut and oilseeds — is well known. RCEP would be worse than ASEAN FTA.

Even as the UPA Government was negotiating the India-EU FTA, one of the prime concerns expressed by organisations of farmers, experts and even the largest milk cooperative Amul, was over the threat of import of milk and milk products, especially skimmed milk powder and butter oil from the EU.

Milk, as farmers in Rajasthan point out, is their ATM which provides them money for their daily expenses while incomes — if at all — from crops is seasonal. In India, small and marginal peasants owning less than a hectare account for 48.4 per cent of land owners. While they own merely 25 per cent of land, they own about 50 per cent of the cattle. About 10 crore farmers in India, mostly poor and marginal and a majority of them women, are engaged in dairying.

The plantation sector, horticulture, sericulture, floriculture, seed industry, pharmaceuticals, small and medium industries, and fisheries are also in trouble due to the ASEAN FTA.

Farmers cultivating groundnut, oil palm, mustard, sunflower, soyabean will be affected adversely. The past experience of groundnut and coconut farmers seeing a fall in demand due to import of cheaper palm oil is all too evident.

The plantation sector in India, especially Kerala, bore the worst impact of FTAs (starting with the Indo-Sri Lanka FTA) signed in December 1998, and which came into force from March 2000. Tea, pepper, nutmeg, coffee, rubber, cardamom and coconut were badly hit. The removal of quantitative restrictions in April 2001 under the WTO regime further exposed these crops to international competition. The then Congress government, despite all this, went ahead with the ASEAN FTA in 2009 with the opposition BJP in tow.

The ASEAN FTA gradually reduced import duties for tea, coffee and pepper while natural rubber, cardamom and few tariff lines on coffee were kept under the exclusion list. Yet, rubber farmers suffered losses due to large-scale imports. Farmers have been repeatedly complaining of inferior Vietnamese pepper coming through Nepal or Sri Lanka leading to a fall in prices.

Fears that tea from China could be routed through any ASEAN country having a duty advantage, are not unfounded. The presence of China, Australia, New Zealand and Japan in RCEP will also affect sericulture, horticulture as well as floriculture in India. The Centre should seek the opinion of States rather than sign the mega FTA unilaterally.