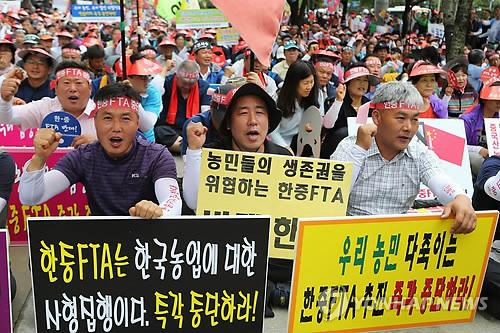 BUSAN, July 2 (Yonhap) — Thousands of South Korean farmers and fishermen rallied Tuesday to oppose a potential free trade deal with China as the two countries kicked off a new round of negotiations to tear down trade barriers between two of Asia’s biggest economies.

An estimated 3,200 protesters from across the country attended the rally in front of the BEXCO convention center, a few kilometers from the negotiation venue in this southeastern port city of Busan. The organizers put the number of participants at about 6,000.

Wearing red protest headbands, the demonstrators shouted slogans and pumped clenched fists in the air while holding pickets with signs, such as "Korea-China FTA is the death sentence to Korean farming."

The demonstrators later marched toward the hotel on Haeundae Beach, where the negotiations were under way. Some of them attempted to enter the venue, but were blocked by riot police. After 90 minutes of standoff with police, the protesters dispersed voluntarily.

Three protesters were briefly detained by police, and there were no serious clashes.

Organizers said they will hold a rally again on Wednesday.

South Korea and China launched official free trade negotiations in May last year. This week’s talks, which are the sixth in their series, came days after South Korean President Park Geun-hye and Chinese President Xi Jinping agreed at a summit last week to step up efforts for a deal.