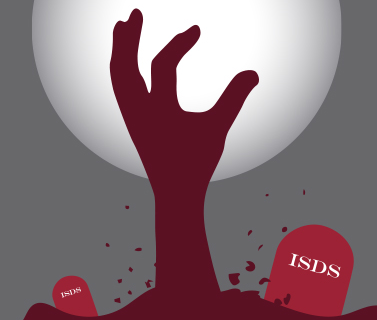 Globalisation is at a dangerous crossroads. One path leads to stronger protection for human rights and the environment and to regained policy-space for governments to address climate change, inequality and other pressing issues of our times. The other leads to more rights for corporations to bully decision-makers and make them pay when they regulate in the interest of the many, not just the few. The European Commission proposal for a multilateral mechanism to settle investor-state disputes (ISDS) – publicly branded as a Multilateral Investment Court – would take us down that second path. It threatens to forever lock-in the highly controversial ISDS system that only benefits corporations.

Download the PDF version – ISDS at a dangerous crossroad When in November 2015 the European Commission released its negotiation proposal for foreign investor rights in the Transatlantic Trade and Investment Partnership (TTIP) with the US, it announced that “it will start work, together with other countries, on setting up a permanent International Investment Court”, which “would lead to the full replacement of the ‘old ISDS’ [investor-state dispute settlement] mechanism with a modern, efficient, transparent and impartial system for international investment dispute resolution”. 1

It was – and continues to be – a thinly disguised attempt to re-legitimise the controversial investor rights in TTIP and other trade deals with some limited procedural reforms, which make investor-state lawsuits more transparent, appealable and less prone to conflicts of interest, but do not address the fundamental flaws of the investor privileges.2 Public outcry had forced the European Commission to halt negotiations over TTIP’s investment chapter and conduct a public consultation on the issue. A record 150,000 people participated and over 97% of them rejected the corporate privileges. The opposition came from a broad and diverse camp, including businesses, local and regional governments, academics, trade unions, and other public interest groups. Even more, over 3.5 million citizens, have signed a petition against TTIP and the EU-Canada CETA (Comprehensive and Economic Trade Agreement) “because they include several critical issues such as investor-state dispute settlement… that pose a threat to democracy and the rule of law”.

3 Since the European Commission’s 2015 TTIP proposal, its goal of establishing a multilateral investor-state dispute resolution mechanism has been included in CETA and the EU trade agreement with Vietnam; 4 the Commission has approached other countries and stakeholders on the issue;5 it has published several papers to steer the discussion (some of them backed by Canada);6 and has launched a public consultation on the proposalviii – a first step towards the Commission’s declared goal of receiving a mandate from EU member states to negotiate a convention to establish a multilateral mechanism for investor-state dispute settlement in 2017. 7

Against this background the Seattle to Brussels Network (S2B) has developed the following position:

THERE IS AN URGENT NEED FOR FUNDAMENTAL CHANGE

The past twenty years have revealed the dangers of the far-reaching privileges for foreign investors, which can be found in thousands of international trade and investment treaties today: transnational corporations (TNCs) and their lawyers have used the threat of expensive investor-state lawsuits to halt or roll back legitimate public-interest laws; governments have been ordered to pay hundreds of millions in compensation for attempts to protect citizens and the environment, including for non-discriminatory measures in line with national or European law;8 and some companies have even used investor-state lawsuits to escape punishment after they were accused or convicted of crimes such as environmental pollution and corruption. In other words: today’s international investment regime is detrimental to public budgets, regulations in the public interest, democracy and the rule of law. And it is a powerful and highly enforceable part of an architecture of impunity for the operations of TNCs – including for crimes committed by them.

On the other hand, the current regime does nothing to protect the rights of people affected by foreign investment. There are no binding international obligations for TNCs on human and labour rights as well as environmental protection and affected individuals and communities have no recourse to international justice when TNCs violate their rights. Internationally, the regulation of TNCs is limited to self-regulation in the form of voluntary codes of conduct, and essentially non-enforceable recommendations by the international community.9 As a result, we are faced with an appalling regulatory asymmetry where TNCs receive supreme protection through international ‘hard law’ via the powerful ISDS enforcement mechanism, while human rights and the environment are only protected through non-enforceable ‘soft law’.

THE EUROPEAN COMMISSION’S PROPOSAL IN BRIEF 10

The first point to clarify is that the Commission’s initiative will not alter the substantive investment rules found in Bilateral Investment Treaties (BITs) and other international investment agreements that already exist or are being negotiated. The Commission is not proposing a multilateral investment treaty with foreign investor protection rights. They made it clear that “the multilateral investment dispute settlement system would have to be available for disputes arising under existing and future agreements” and that “this would also imply that the substantive law being applied by the mechanism would be that found in the underlying agreements”.11

A second important clarification is that the Commission is not proposing to amend all existing international investment treaties in order to refer all disputes to the proposed multilateral ISDS mechanism, but instead have a convention that any country could sign so that “the multilateral system would apply to disputes under an agreement between countries A and B when both countries have ratified the instrument establishing the multilateral system”.12

It is still unclear whether the proposed mechanism would become a new stand-alone institution or be docked into an existing international organisation (such as World Trade Organisation, the Permanent Court of Arbitration or the International Court of Justice).

The Commission is proposing to establish both a first instance and an appeal tribunal with full-time members.

Regarding the members of the investor-state dispute settlement body, the Commission so far proposes:

Regarding the enforcement of awards, the Commission proposes to create an enforcement system comparable to the International Centre for Settlement of Disputes (ICSID) to prevent review at the domestic level and thereby “political interference on the application of investment agreement provisions”.15

More and more governments, particularly from the Global South and backed by civil society, are trying to address that asymmetry: by changing or exiting from the international investment regime;16 and by pushing for a binding UN Treaty, an international legally binding instrument on TNCs and other business enterprises with respect to human rights.17 Such a treaty would include binding obligations for corporations and an enforcement mechanism, and would therefore contribute to ending the impunity that TNCs routinely enjoy for human rights violations and to ensuring access to justice for people and communities who are affected by corporate abuse, for example, through repression, the violation of labour rights or environmental destruction. For civil society, which is backing these and other efforts, the ultimate aim is to prioritise human and labour rights over “investor rights” and cut the unjust privileges which corporations currently enjoy in international law.18

What the European Commission is proposing is a multilateral investor-state dispute settlement mechanism, so ISDS. The “investment court” rhetoric around the proposal could suggest that such a mechanism would deal with grievances from multiple parties related to investment. However, under the Commission’s proposed mechanism, only foreign investors will get special rights to sue and the defendant will always be the state. So, all the proposal does is to multilateralise ISDS.

The flaws of the European Commission proposal

The severe dangers of the European Commission proposal

WE NEED MORE RIGHTS FOR PEOPLE AND THE ENVIRONMENT, NOT FOR CORPORATIONS

At a time when all attention should be focused on averting a global climate catastrophe, on tackling social and economic inequality and on empowering the many, there is no space for agreements which would give corporations power to sue governments who pursue such solutions. Instead of increased corporate power over our democracies we need international rules, which

WE THEREFORE CALL ON