The writer is the national staff coordinator for the ANSWER Coalition (Act Now to Stop War and End Racism) and a member of the Party for Socialism and Liberation. She filed this report from protests outside the negotiations of the U.S.-Korea Free Trade Agreement in Seattle. PSLweb.org will be posting regular updates as protests continue throughout the week. 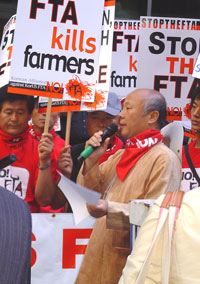 On Sept. 6, protesters from South Korea, the United States, Mexico and Canada joined together to rally and march during the first day of the third round of negotiations for the U.S.-Korea FTA. Plans to negotiate the KORUS FTA were announced last February by the U.S. and South Korean governments. If an agreement is reached, it would be the largest free trade agreement since NAFTA.

The governments hope to complete the negotiations by next spring before Bush’s authority to "fast track" a deal expires. Fast-track authority allows U.S. envoys to negotiate an agreement that can be submitted to Congress for a yes-or-no vote without amendments.

Two major coalitions have formed to oppose the KORUS FTA and organize protest activities during the negotiations: the Korean Alliance Against Korea-US FTA (KoA), based in South Korea, and Korean Americans Against War And Neoliberalism (KAWAN), based in the United States.

Around 60 people traveled from South Korea to hold demonstrations in Seattle during each day of the negotiations, which began on Sept. 6 and will conclude on Saturday, Sept. 9. The delegation from South Korea represents many sectors of the population who will be negatively impacted by the KORUS FTA.

South Korean representatives now in Seattle include members and leaders of the Women’s Committee Against FTA, which includes Women Against U.S. Imperialism and Korean Women’s Peasant’s Association; Korea’s two major trade union federations, the Korean Confederation of Trade Unions and the Federation of Korean Trade Unions, including the vice president of the Korea Health and Medical Workers’ Union, the first vice president and director of International Solidarity of the Metal Workers Union, and members of the government employees and teachers union; the country’s major peasant organizations, including the Korean Advanced Farmers Association and Korean Peasants League; leaders of the Democratic Labor Party, including DLP National Assemblyperson Ki Kab Kang; South Korean students; environmental groups and others.

The first day of demonstrations began with picketing outside of Seattle’s Museum of History and Industry where the KORUS FTA negotiations are being held. The site is located across the street from the Washington State Convention and Trade Center where the World Trade Organization meeting was held in 1999.

Dancers and singers from the U.S. and South Korea perform after several marches and rallies. This dance team began in June during the first round of negotiations and has since expanded its membership.

Beginning at 8:30 a.m., people held signs, banners and flags, and chanted, sang and gave speeches outside of the building. When members of the negotiations team-which includes over 100 representatives from both the U.S. and South Korean governments-tried to sneak in through back alleyway entrances, demonstrators marched within sight and sound of them and chanted militantly as they quickly exited their limousines.

Seattle Police blocked the alleyway with squad cars and blocked the doors to the building with cops on foot, bicycle and horseback. Demonstrators remained right outside the building for almost three hours.

Next, demonstrators joined unions that had organized from across Washington, northern California and Canada for an opening rally, co-sponsored by the KCTU, the FKTU and the AFL-CIO.

The rally at Westlake Plaza-less than half a mile from the negotiations site-included opening and closing remarks by Dave Freiboth, the executive secretary-treasurer of the Martin Luther King Jr. Central Labor Council. Talks were given by Washington State Labor Council President Rick Bender; representatives of the KCTU and the FKTU; ILWU National Representative Willie Adams; representatives of KoA and KAWAN; and AFL-CIO Organizing Director Stewart Acuff.

The evening concluded a series of political cultural performances and a candlelight vigil at Westlake Plaza.

A variety of demonstrations, marches, rallies, workshops, forums and other events are planned for the duration of the four days of planned negotiations. Simultaneous demonstrations are taking place in South Korea.

The ANSWER Coalition is among the many organizations supporting the anti-KORUS FTA efforts. ANSWER played a significant role in the week of events they held in Washington, D.C. in June 2006.

In July, ANSWER’s National Coordinator, Brian Becker, traveled to South Korea to take part in anti-KORUS FTA actions, including a protest of 100,000 organized by trade unions and peasant organizations during torrential rains.

This week in Seattle, ANSWER is providing mobilizing and organizational support for the events.

The Party for Socialism and Liberation is also an endorser and is supporting the week of events.

Socialism and Liberation Magazine and PSLweb.org have covered protests against the KORUS FTA in June and July, as well as the historical and ongoing struggle for national liberation on the Korean peninsula. See below for links to past coverage and background information.

Analysis of KORUS FTA and coverage of June 2006 events in Washington, D.C.