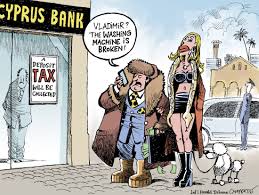 See you in court: Russians may sue over Cyprus losses

Russian businesses and banks that face losses from the European Union’s bailout of Cyprus are considering legal action but may have a hard time making a case, say lawyers who are combing through treaties find strategies to recover funds.

Big depositors- many of them Russian — face losses of up to 40 percent as the result of a so-called "bail-in" to back 10 billion euros ($13 billion) in EU financial aid to stabilize the Cypriot banking system.

"It’s worth trying, it’s not going to be easy, its not going to be a one-off, 24-hour court case, but the nature of the action itself sounds like expropriation," said Andrey Goltsblat, managing partner at Moscow-based law firm Goltsblat BLP.

There could be a basis to sue either Cyprus or individual banks, say lawyers who have been contacted by current and prospective clients seeking redress.

"People are just frustrated and ... are trying to find a way to get their money off Cyprus," said Goltsblat, who said that two clients — one in Russia and a second Russian client residing in Cyprus — had inquired about legal options.

Steven Philippsohn, partner at London-based law firm PCB Litigation, said three major banks based in or around Russia had asked about the possibility of legal action.

"We have been contacted and we are monitoring the situation and will revert to them when we have further news," he said.

Russians are believed to account for most of the 19 billion euros of non-EU, non-bank money held in Cypriot banks at the last count by the central bank in January.

While insured deposits of up to 100,000 euros are safe, big depositors in Cypriot banks could lose about 40 percent of their money, Finance Minister Michael Sarris said on Tuesday. Hiring a lawyer may help depositors reduce their losses.

"If you file a suit they are going to be concerned and hopefully come to an arrangement that would be more satisfactory than if you didn’t," said Philippsohn. "There may be a chance of recovery too."

Still, there is skepticism about the likelihood of success. An earlier plan to impose a state levy on deposits, which was described by Russian officials as "expropriation," has been ditched in favor of a plan that restructures banks and exchanges non-guaranteed deposits for shares.

If Cyprus’s two biggest banks are simply allowed to "die, without passing the law on taxing deposits, there will be no chance to take legal action," said Goltsblat.

Vladimir Gidirim, partner with Ernst & Young in Moscow, noted that large depositors would not have investments directly confiscated but see them exchanged for equity stakes in a "good bank" to be carved out in the rescue.

"This is not a total expropriation," said Gidirim. "After a year, the stake might be worth more than the initial deposit."

"Russian depositors who suffered from Cypriot authorities’ actions may, in theory, file lawsuits but I don’t see substantial reasons for it," he added.

Lawyers say one route to take action would be to use a bilateral investment treaty to show that investments must be protected. Russia’s investment treaty with Cyprus has not been ratified, however, so another option could be via treaties with other countries where Russian firms may have vehicles.

"It could well be that some of the vehicles that lost the money — for example companies that have been formed by Russians in the British Virgin Islands or Jersey - may have a bilateral investment treaty and it may be a breach if we can demonstrate that people have been treated unfairly," said Philippsohn.

A second option could be to take legal action under international public law, via the International Court of Justice. A case would need to be brought by Russia on behalf of its people, lawyers say.

"Clients have not come up and raised this but there is a growing feeling out there of unfairness and injustice that the depositors are being forced to carry the can," said Keane, whose firm has Russian corporations among its clients.

State-controlled VTB, the Russian bank with the greatest exposure to the island, said it was premature to comment on whether it planned to sue the Cypriot authorities.

"The VTB Group is carefully following the situation. It will be possible to estimate the consequences only after we have reviewed a package of documents prepared by the Cypriot government," the bank said in a statement.

VTB has said that in a worst-case scenario losses in Cyprus could reach "tens of millions of euros." Sberbank, Russia’s top bank, declined to comment.