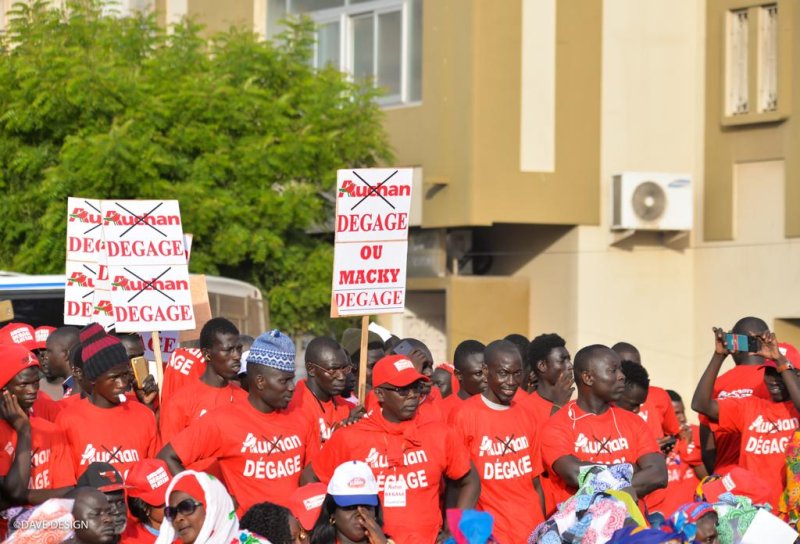 Senegal: No to Auchan and any form of recolonization

Guy Marius Sagna and his comrades have made resistance to French colonialism their main struggle. They target transnational corporations, the economic policies and positions of international organizations, and European trade policy.

Quite a few Senegalese people are fed up with the recolonization of their country by French capitalism. They have gathered among several citizen groups like France Dégage (France, get out!), Auchan Dégage (Auchan, get out!), No to the CFA Franc, or No to EPAs (Economic Partnership Agreements between the European Union and the African-Caribbean-Pacific countries). As far as they’re concerned, these struggles are crucial: it’s about safeguarding the economic sovereignty of Senegal, but also of other African countries.

On 16 October 2018, many of them gathered in Dakar to protest against Auchan, the French transnational supermarket, whose growing presence in Senegal threatens thousands of smaller traders. It’s a major concern especially since another large French supermarket, Carrefour, will also open stores in the country soon.

Of course, such an invasion is anything but new. It echoes the beginning of colonization, when “France arrived and established merchant outposts, which were the ancestors of large supermarkets,” recalls Sagna.

The CFA franc is also connected with the arrival of major French brands “because it has been shaped in such a way that it facilitates imports, but also, it facilitates money transfers,” he says.

Moreover, new trade actors from China, India or the US, now operating in Africa, have somewhat changed the rules of the game, in what was, until recently, France’s backyard. Because their market shares have been eroding, Europeans have been pushing a more aggressive trade agenda, via the EPAs. They want to ensure that their presence in Africa is not threatened, although Nigeria is still blocking the EPA process in West Africa, at least for the time being.

These issues are all related. All these fights are “various responses to the plans of recolonization,” the Senegalese activist insists.

“Only fighting sets you free”

“Actually, traders in Senegal, some of whom have begun to set up Auchan Dégage coalitions, said they now understand why we are fighting over the EPAs,” Sagna says. He claims it’s become clear to them that their struggle is linked to the EPAs, “which were preparing the arrival of the big brands, or rather the big brands were preparing the signing of the EPAs.” When these relationships become clearer, it’s easier to talk about broader issues, such as the French imperialist system and Franco-Senegalese relations in general.

“The fractions that were perhaps the most reactionary, or the least interested in our message, are now at the forefront of the struggle. And it’s precisely they who will be decisive in the balance of power to be built, and not the minority of fanatics or avant-garde that we are. It’s the population, the peasants, the tradespersons, our mothers who are directly threatened by Auchan.”

Sagna strives to be optimistic about the future, because these “new soldiers” give him hope that all is not lost in Senegal and Africa, and that the fight will keep on growing.

“Today we have to stop debating about the world, stop debating about Africa, but we have to transform it. And transforming it implies building bridges, building relationships between our movements, establishing a basic roadmap, establishing a basic action plan, so that we can coordinate our actions,” he says. Building bridges at the national level is key to their struggle, but Sagna also wants to connect with other Africans opposed to recolonization and the neoliberal juggernaut.

“When North Africans speak of “no to DCFTA” [Deep and Comprehensive Free Trade Agreement with the European Union], we, organizations of Senegal, can echo this struggle in Senegal, so that the Moroccan or Tunisian authorities based in Senegal know that we, in Senegal, say no to the DCFTA, even without being Moroccans, Tunisians. And vice versa. We are threatened by the same evil, by the same system.” And Sagna is adamant, “what is to be built is the African unity of peoples, and not the African unity of cartels of presidents, who are in reality subject to imperialism.”

“And of course, at the same time, it will have to be done in coordination with so-called Northern organizations. This is how, I believe, we will create, consolidate and reinforce the internationalism necessary to build a global balance of power between peoples and multinationals.”