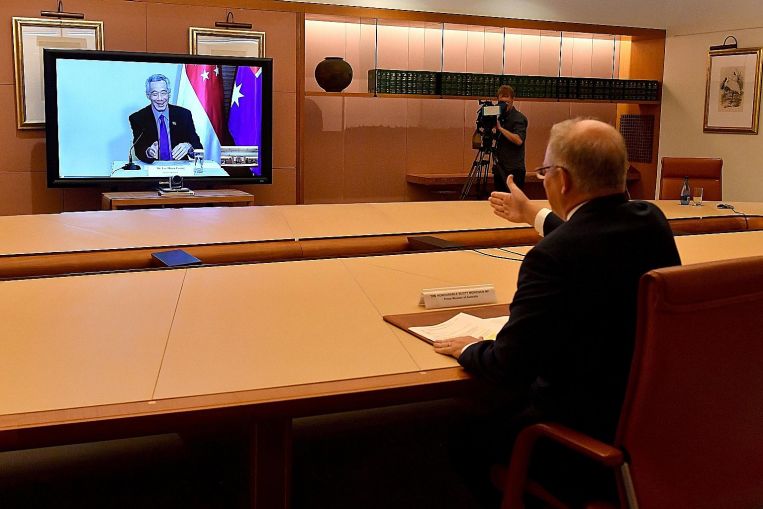 SINGAPORE - Singapore and Australia have signed an agreement that will open up economic opportunities for both countries.

The digital economy agreement will facilitate digitalisation of trade processes and make it easier and more cost-effective for Singapore companies to engage in cross-border business activities with Australia, said Trade and Industry Minister Chan Chun Sing.

Mr Chan signed the agreement with Australia’s Minister for Trade, Tourism and Investment Simon Birmingham in a virtual ceremony on Thursday (Aug 6).

The Singapore-Australia Digital Economy Agreement (Sadea) builds on Singapore and Australia’s strong bilateral trade and investment flows to enhance economic opportunities in the digital realm, said the joint statement issued by the Ministry of Trade and Industry, the Ministry of Communications and Information, and the Infocomm Media Development Authority.

It is the second digital economy pact that Singapore has signed, following the Digital Economy Partnership Agreement with Chile and New Zealand in June.

"As Covid-19 forces businesses to consider innovative ways to reach customers and adapt to a new way of doing business, agreements like the Sadea will allow our companies to take advantage of opportunities in the digital economy and tap new technologies to create new digital products and services," said Mr Chan.

His Australian counterpart, Mr Birmingham, said that the agreement will help expand the scope of Australia’s economic engagement with Singapore, which is its largest two-way trading partner in South-east Asia.

"These are some of the most ambitious digital trade rules Australia has ever negotiated, and this agreement will serve as benchmark for other digital trade rule negotiations within our region," Mr Birmingham noted.

"The agreement builds on Australia’s and Singapore’s leading roles in negotiating new international rules on e-commerce in the World Trade Organisation (WTO) to better facilitate the growing volumes of digital trade across the globe."

Singapore, along with Australia and Japan, is a co-convener of the Joint Statement Initiative on E-Commerce at the WTO.

The Sadea will enable trusted cross-border data flows without unnecessary and costly requirements such as data localisation. It will also protect consumers’ privacy and businesses’ proprietary information.

Singapore and Australia agencies will identify specific projects under the seven memorandums of understanding (MOUs) signed in March this year, which will lead to tangible benefits and opportunities for businesses when implemented.

These include initiatives such as the e-certification for import and export of goods and the sharing and verification of electronic trade documents using distributed ledger technology.

The MOUs also include a commitment to work towards mutual recognition of digital identification systems and providing access to data to promote the development of new products, services and digital solutions.

Singapore has also launched negotiations on a digital partnership agreement with South Korea.