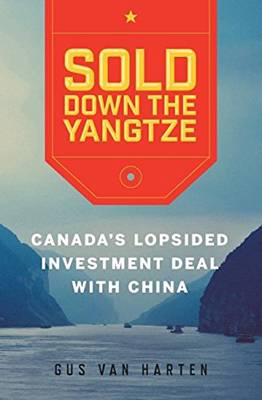 Sold down the Yangtze : Canada’s lopsided investment deal with China

In Sold Down the Yangtze, investment treaty expert Gus Van Harten offers a searing critique of Canada’s 31-year investment deal with China, which could end up costing taxpayers billions of dollars. The Harper Government finalized the controversial Canada-China Foreign Investment Promotion and Protection Agreement in September 2014. As a warning to Canadians, Van Harten describes how the agreement favours China and puts public money and democratic institutions at risk. He debunks the error-ridden claims of the agreement’s promoters-from big-time media commentators to foreign investment lawyers to federal trade officials-who helped rush Canada into a long-term, lopsided deal. Van Harten also points to other massive "trade" and "investment" deals slated for Canada and beyond, and to the ominous power lying at the heart of them all. The thoroughly researched, rigorous argument of Sold Down the Yangtze broadcasts a troubling global trend, while offering hope and practical steps for a better, more informed future.

GUS VAN HARTEN Gus Van Harten is a professor at Osgoode Hall Law School, having taught previously at the London School of Economics. He has written over twenty academic studies on investment treaties and has provided commentary to governments, inter- national organizations, and media such as Bloomberg, the CBC, the Globe and Mail, the Guardian, and the Toronto Star. He lives in Burlington, Ontario.

A note to Kenya on its trade talks with the US : There is strength in numbers