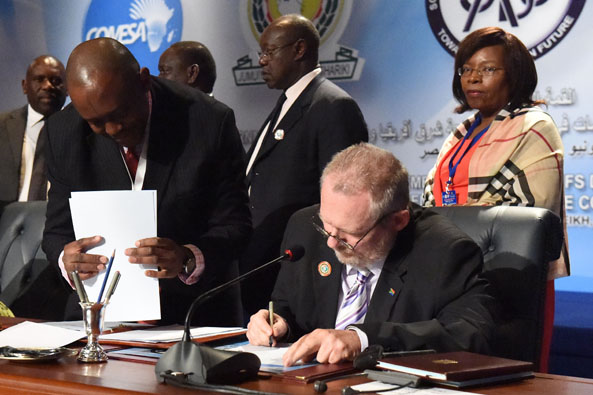 South Africa has deposited the instrument of ratification of the Agreement establishing the Tripartite Free Trade Area (TFTA) on the margins of the African Union Ministers of Trade meeting taking place in Cairo, Egypt from 12-13 December 2018. The TFTA comprises three regional economic blocks – the Common Market for Eastern and Southern Africa (COMESA), the East African Community (EAC) and the Southern African Development Community (SADC). The deposit of the instrument means that South Africa has formally and legally committed to the TFTA.

The TFTA was launched in June 2015 in Sharm El-Sheikh, Egypt. South Africa signed the agreement in July 2017 and Parliament ratified the Agreement in October this year. Twenty-two of 26 member States have signed the agreement, which will enter into full force once it has been ratified by 14 countries. South Africa is the fourth country to deposit the instrument of ratification. The other three countries are Egypt, Uganda and Kenya.

“It was the tripartite initiative that led to the work of broadening the integration beyond our existing regional communities and working towards establishment of large free trade areas across our continent, the initiative that is now taken forward by the African Union”, said Minister Davies.

The Chair of the Tripartite Task Force and the Secretary General of COMESA Chileshe Kapwepwe, congratulated South Africa and indicated that it was encouraging to the other countries that have already deposited their instruments. Kapwepwe said that there are an additional six countries in the process of depositing their instruments.

She said the TFTA is focusing on three pillars, Market Integration, Industrial Development and Infrastructure Development. She added that these three areas have been prioritised to support the regional economic integration efforts in the region and the Continent.

Minister Davies reiterated that numerous benefits would accrue to South Africa as a result of the Agreement. These include access to new and dynamic markets characterised by a combined gross domestic product of $1.2-trillion and a combined population of about 626-million people, which is over half the total African population and economy.

South Africa’s trade with TFTA countries represents about 16% of its trade with the world.

In 2017, total trade with TFTA countries was in excess of $27.6-billion. The bulk of the trade is with within SADC.

Distributed by APO Group on behalf of The Department of Trade and Industry, South Africa.