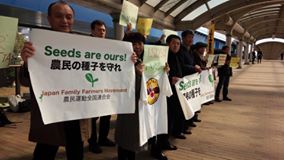 RCEP is a proposed trade and investment treaty currently being negotiated between 16 countries in the Asia-Pacific region including India that together cover half the world’s population.[1] Launched in November 2012, the 17th round of offical talks took place in Kobe, Japan (26 February to 3 March 2017).

The 19th round of RCEP’s trade negotiations committee will be hosted by the Government of India in July 2017. But the key question is what positions should India be taking?

RCEP has reached a major turning point as free trade is facing a legitimacy crisis across the world. After USA withdrew from the Trans-Pacific Partnership Agrement (TPP) (a similar initiative that included many Asian, but also American nations), RCEP remains as the main mega-regional agreement for Asian & Pacific nations.

The RCEP agreements are being negotiated behind closed doors; though several components of the texts under negotiation have been leaked online and have been analysed. The analysis indicates that the RCEP negotiations will impact nearly every sector of the economy and all aspects of society. It is therefore important to understand RCEP and its likely impacts.

People in India, specially in the Southern region, have already felt the brunt of liberalisation through earlier trade agreements, such as the multilateral WTO, India-ASEAN FTA and other FTAs. They have experienced the surge of imports of oil seeds and cash crops, closure of the machinery and electronics manufacturing sector leading to loss of employment, imports of cheap steel leading to loss of production within the country, increased import dependence for production of pharmaceutical and other goods, and increased cost of medicines due to more stringent patent rules, to name a few.

RCEP could make it worse by further reducing import tariffs on agricultural and manufacuring goods; by further reinforcing the monopoly of pharmaceutical companies; by locking in the role of the private sector in providing essential public services such as healthcare and education; and by widening the scope of an unfair system of dispute resolution in which investors can sue governments for billions of dollars.

The mega regional FTA also raises concerns about pushing ‘WTO-plus’ issues on developing countries. This is when there is evidence of how existing WTO commitments in intellectual property (TRIPS), agriculture (AoA) and investment measures (TRIMS) have adversely impacted policy space and livelihoods. Apart from the global level, RCEP also raises Constitutional challenges at the state level where many of these sectors under negotiation fall under state jurisdiction.

In this context, a workshop is being convened in early April to build our collective capacities on trade agreements in general and RCEP in particular. The workshop will be joined by researchers who have been closely following the negotiations and by representatives of mass organisations in different sectors.